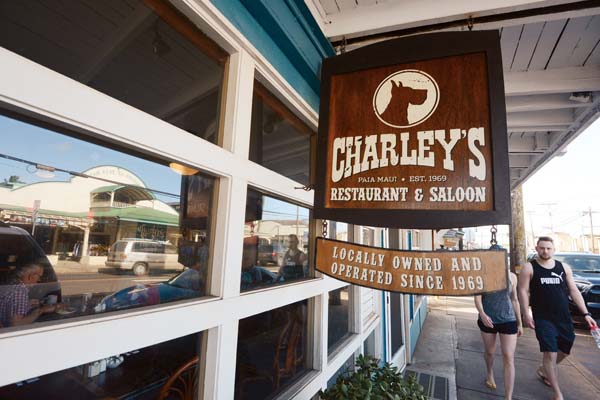 Paia landmark Charley’s Restaurant and Saloon is open for business Friday morning. An email reportedly was circulated among workers that the Paia icon would close down Sunday, but it remains open. A landlord dispute and declining business are cited as possible reasons for the uncertainty. The Maui News / MATTHEW THAYER photo

PAIA — Despite rumors circulating about its closing, Charley’s Restaurant and Saloon, a 50-year-old landmark for food and entertainment on Maui, will remain open for the time being, a restaurant official said Tuesday.

“It was a close call,” said the official, who asked to remain anonymous to protect his job. “We’ve had complications with the landlord, and tourists and business is slower this year than in previous years.

“But we’re staying open, and yeah, we need the community to come by.”

Charley’s employees reportedly received an email the middle of last week that said the restaurant would close Sunday, but it remains open.

Charley’s was established in 1969 by Jim Fuller on Front Street in Lahaina. Fuller moved his business to the Paia location, where it grew in popularity and attracted the likes of Willie Nelson and other musicians. Nelson, along with other renowned national and local performers, played throughout the years at Charley’s, which has been frequented by Hollywood celebrities, artists, surfers and others.

Herman, Fuller’s “longtime family friend,” acquired the business in 2011, according to Charley’s website.

Mark Cameron, operating partner of neighboring restaurant Rock & Brews, said he heard “bits and pieces” of a potential Charley’s closure, but that things seemed “business as usual” this week.

Cameron said that Charley’s, Rock & Brews, Milagros and other businesses along Hana Highway and up through Bank of Hawaii on Baldwin Avenue are situated on parcels owned by the same family of landowners.

He added that the Charley’s situation has no correlation to nearby businesses.