Kama is in the middle

She doesn’t see herself as swing vote, but her decision carries sway 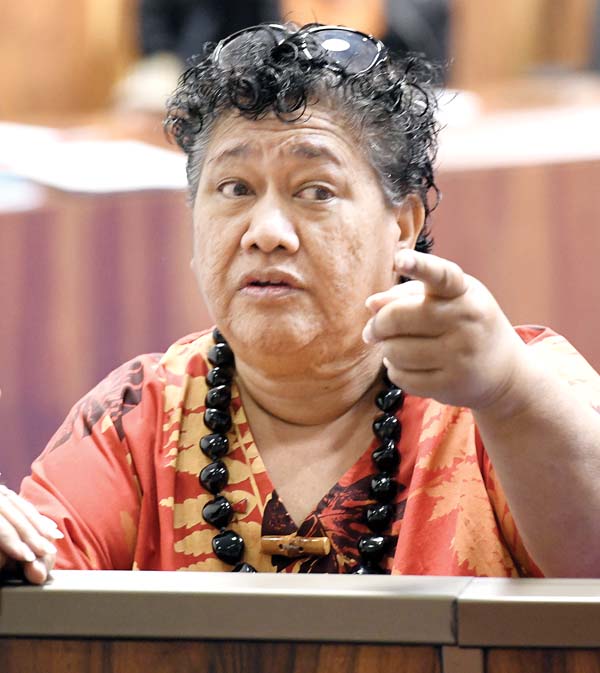 Council Member Tasha Kama, shown during a Feb. 22 meeting, said she doesn’t consider herself a swing vote, yet her decision in four 5-4 tallies determined the fate of nominees for director positions in the county. -- The Maui News / MATTHEW THAYER photo

WAILUKU — The County Council member who upset former Mayor Alan Arakawa in the bid for the Kahului residency seat is proving just as unpredictable in her new job.

Freshman Council Member Tasha Kama has emerged as the swing vote in the first major test the new council has faced this term — the vetting of Mayor Michael Victorino’s 11 director nominees.

Five directors were confirmed in 9-0 decisions. Two were denied in an 8-1 vote and a 6-3 vote. And four came down to a 5-4 split, with most council members voting together on the candidates. The exception was Kama, who nonetheless has brushed off labels of being the swing vote.

Kama doesn’t always say much on the floor. In committee and at the full council, she’s been cautious, explaining that she doesn’t want to get pegged as supporting any particular side. 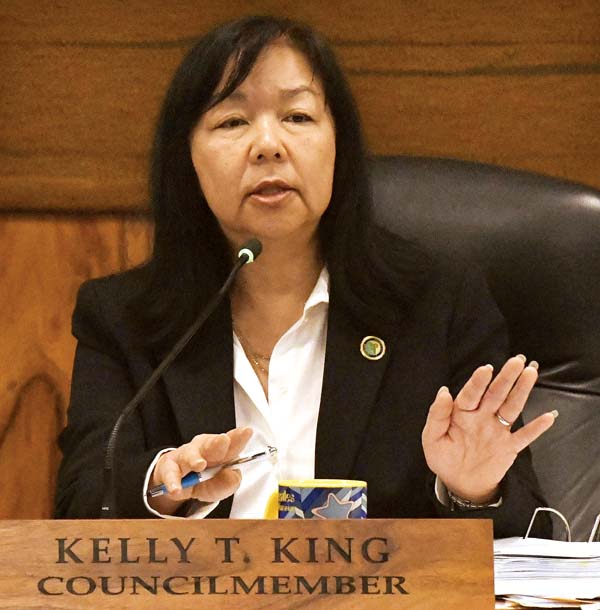 “I don’t say very much,” she said. “I only say what I think I need to say. Other than that, I don’t want to exacerbate situations. I don’t want to kill the horse that’s already dead.”

On Feb. 22, Kama stunned many in Council Chambers when she announced that she was changing her vote on Corporation Counsel Patrick Wong, who was bound for disapproval following a 5-4 rejection in committee. Kama’s decision flipped the vote in favor of Wong and earned her vocal criticism from the gallery. Council Members Riki Hokama, Alice Lee, Mike Molina and Yuki Lei Sugimura also supported Wong.

Kama said she “absolutely” feels the pressure — in the gallery, on social media and through emails and calls telling her to vote this way or that. Kama said that her sister was looking on Facebook the other day and read that people were talking about not re-electing her. 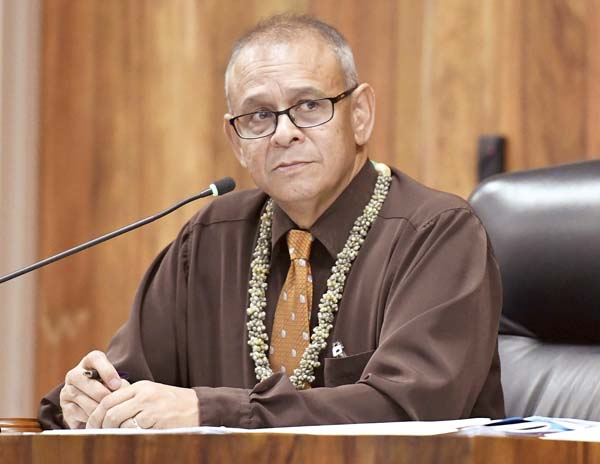 Council Member Michael Molina, who chairs the Governance, Ethics and Transparency Committee that had the initial crack at vetting director nominees, said colleagues who often voted with him “acted independently.” He attributed their similar votes to prior experience and knowing the nominees. Molina is shown chairing his committee in this photo taken Jan. 23. -- The Maui News / MATTHEW THAYER photo

With the council, “it’s a different kind of pressure.” Kama said her colleagues aren’t coming to her office to try to sway her, but said she feels it in the way that they vote, the comments they make and “in how the chair looks at me and she says, ‘Well, we shouldn’t be concerned about all the people out there.’ “

Kama was referring to discussion on Feb. 22 when she said that the council needed to choose the best directors “for all of our people out there,” not just those in the Council chambers that day.

Council Chairwoman Kelly King responded later on that she felt “we shouldn’t be making our decisions based on who we don’t see before us.”

Nevertheless, that continues to be a concern for Kama. 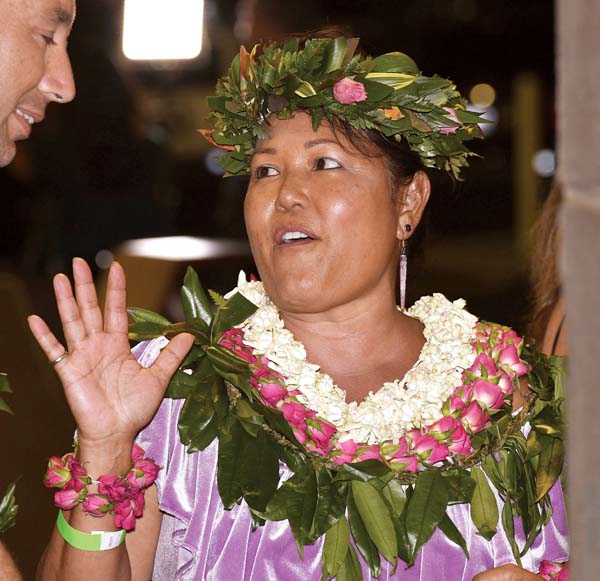 Former Council Member Elle Cochran met with several director nominees and told them they did not have the votes to be confirmed. She told The Maui News that she deduced that those directors faced possible defeat and wanted to let them know. She said she did speak with Council Chairwoman Kelly King but did not discuss the directors. Cochran is shown on election night Nov. 6. -- The Maui News / MATTHEW THAYER photo

Kama said that she makes decisions based on her role “as a native daughter, as a wife, as a mother, as a grandmother, as a sister, as a Christian, as a believer, as a child of God. All of that is what’s wrapped up in here. And what you see here is what sits there.”

Molina, who chairs the Governance, Ethics and Transparency Committee that’s been vetting the directors, said he hasn’t really been surprised by Kama’s votes.

“Not really, knowing Tasha and the kind of person she is,” he said. “She’s a person of very strong principles. I’ve known her to be a person that will make a decision based on what she thinks is best for the community. It didn’t surprise me that she would take a somewhat unexpected stance to some.”

Molina said he knows Kama has been facing a lot of pressure. He said he’s met with her but hasn’t talked with her about being the swing vote.

“To me, each member, they have their own mindset,” he said. “I’m not one to go lobby any of them to say, ‘Vote for this person or that person.’ If they ask me what do I think, then I’ll share my thoughts.”

King, meanwhile, said that “a lot of the votes surprised me,” not just Kama’s.

“I thought the outcome was probably surprising to many of us, but I didn’t spend any time trying to sway individual council members one way or another,” King said. “I don’t know what to tell you about Tasha’s change in vote. Or Shane Sinenci. It was also kind of a surprise when I think Riki Hokama voted against David Goode. I think it kind of goes to show that maybe none of the votes were predetermined, and everybody was making up their mind as they heard new information.”

When asked if she noticed Kama being pressured by council or community members, King said that “I think we all had pressure from the community to vote one way or another.”

“I don’t know what specific pressure she experienced, but I feel like I probably had pressure on both sides for everybody,” King said.

Part of the backlash Kama has gotten is because during the election, she was promoted by the ‘Ohana Coalition alongside King, Rawlins-Fernandez, Paltin and Sinenci as candidates who would represent people and the environment over corporations. Many celebrated when ‘Ohana candidates won a majority on the council, although council members have emphasized that they do not see the body as one side versus the other.

Both King and Molina denied any sort of collusion by ‘Ohana council members or others. During the vetting process, Hokama had asked some of the directors whether they had been contacted by former Council Member Elle Cochran, who told them they did not have the votes to be confirmed and alleged a “pre-scripted” process.

Cochran, who spoke to The Maui News on Feb. 24, said she called the directors because she had built working relationships with them and wanted to give them a heads-up that they may not have the votes to get confirmed.

Cochran denied having spoken to any of the council members besides King about their votes.

“I didn’t go, ‘What are you voting, what are you voting,’ ” Cochran said. “I only spoke to Kelly King. So that was it. . . . Again, it’s my brain just deducing on my own. I am not beholden to Sunshine (Law) anymore. I’m not a council member anymore. So I can say and talk to whoever I want whenever I want. But I didn’t do it that way.”

When asked what she and King discussed, Cochran said that “we didn’t really talk about any of that, about directors. I had talked to her just to ask her what’s her bigger vision as a council chair. That’s what our meeting was about. She had just been voted in.”

King declined to comment during the vetting process but spoke with The Maui News on Monday, days after the final votes.

“I did meet with her before the proceedings,” King confirmed. “Her opinion was valid because she worked with a lot of those directors.”

King said that she told Cochran how she would likely vote, but pointed out that some of her votes changed in the end. King added that she and Cochran didn’t discuss any of the other council members’ votes but that Cochran had the right to talk to them “as a voting member of our community, whether or not she was a previous council member. There’s nothing that prevents our citizens from going to all nine council members.”

King said that when Cochran contacted the directors, “she wasn’t speaking on authority from me, so I don’t know what made her say those things.”

“I’m sorry that the message seemed to be . . . that it was coming from me, because I never asked her to tell anybody those things, and I never said those things to her that this is a done deal,” King said.

Molina, meanwhile, said that he and the other three council members who usually vote with him did not make any sort of agreement to vote a certain way, and that he “acted independently.” He said that similar experience was likely a factor in how he, Lee and Hokama voted.

“The one thing the three of us have in common is we’ve served multiple years on the council, so we have an idea what the process is and about the consequences of if you vote yes or no, whether it be on the nominees or other issues,” Molina said. “And I guess because of our prior experience in knowing the individuals.”

But Molina thinks both the experienced and new members can learn from each other.

“For those that say sweep everything out, I disagree with that,” Molina said. “You need to keep some of the old ideas, if you will, because these ideas have worked. . . . And the things I can learn from the new guard are in doing better planning and the way we address future projects.

“It’s the reciprocal of ideas. And I think all nine of us want the best for Maui County.”

King said council members will likely differ over their ideas of governance, but that in general they want the same things, like affordable housing and a clean environment.

“It doesn’t feel like there’s any animosity, which is what I felt in the last council,” King said. “I think there’s a respect that sometimes we agree and sometimes we don’t. I don’t think anyone’s expecting it will always be a 5-4 split. Hopefully a lot of times there will be more agreement than not.”