Council committee does not make move to defund project 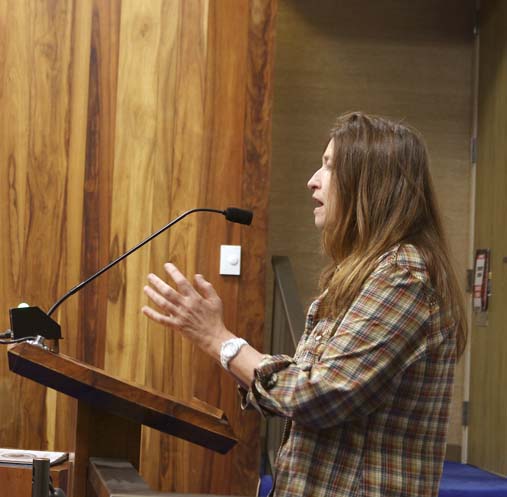 Helen Nielsen was among more than 30 testifiers who showed up at a council Economic Development and Budget Committee meeting Friday on the Wailuku Civic Complex. The committee was deciding whether to defund part of the project. -- The Maui News / KEHAULANI CERIZO photo

WAILUKU — A Maui County Council committee on Friday declined to take the apparently unprecedented action of defunding a portion of the Wailuku Civic Complex project slated to begin this summer.

Introduced by Economic Development and Budget Committee Chairwoman Keani Rawlins-Fernandez, multiple measures would have reversed the council’s previous approval of $44 million — including bond funding — for the first phase of the project, which includes infrastructure upgrades and a parking structure.

The $80 million-plus project, whose second phase includes a $40 million civic center, has come under fire by some in the community for its large price tag. While the council has approved funding for the second phase, it still must approve a bond allocation for the project.

Rawlins-Fernandez’s measures would have trimmed the $44 million already approved and bond-funded to $13 million, which would have paid for infrastructure upgrades only.

Veteran council members Riki Hokama and Mike Molina both said that in their experience they have never seen a measure defunded like this. 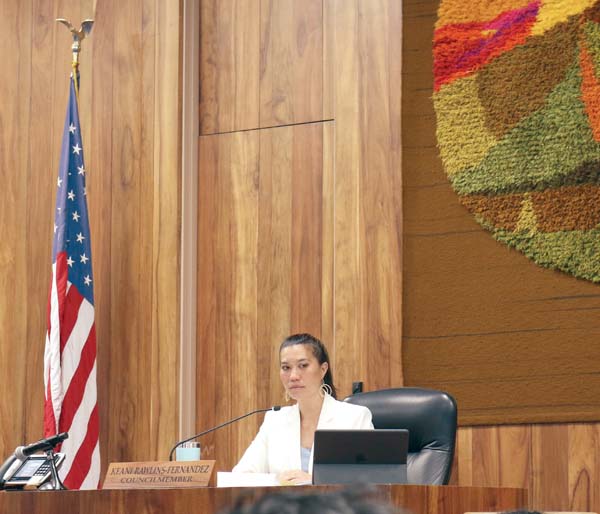 “I didn’t realize we were taking away the parking structure,” committee Vice Chairwoman Kelly King said before the vote. “The council passed it . . . I’m fearful for what the next council will do if they reach back into our council time and say, ‘We don’t like that so we are going to take that away from you.’

“We are seeing our president reach back . . . and do the opposite of the previous administration.”

Supporters and detractors of the project mobilized for the committee meeting. The committee heard from more than 30 testifiers Friday morning and deliberated until late afternoon.

Paltin then called for deferral of the measures, which was unanimously approved in a voice vote.

Some members said they wanted more information on the $80 million project and noted that the county administration was presenting a public meeting next week on the topic. The question-and-answer session, hosted by the county Department of Management, is set for 5 p.m. Thursday in the County Council Chambers.

Last spring, $44 million was approved by the County Council for the first phase of the project, which includes road and infrastructure improvements along Church and Vineyard streets. This portion could start as early as June, according to Erin Wade, county planner and project administrator.

The next part of the first phase includes construction of the 428-stall parking garage and shared road behind Market Street properties, which is slated to begin in September, she said.

Another $40 million for Phase 2, which includes the three-story civic building and plaza, was appropriated by the council in December, but the project must return there for bond authorization.

Discussions over the need for Wailuku town parking improvements have gone as far back as 1962, according to county officials. This particular project to alleviate parking issues began in 2000, with many community meetings held to generate feedback over the years.

Supporters include area land and business owners, along with many residents, who see the complex as a way to revitalize Wailuku town. Project critics say the price tag is too high, and the money would be better spent on county priorities, such as affordable housing.

“We’re planning for a tomorrow based on yesterday,” said Sean Housman, a Wailuku pastor, who criticized the project’s cost. He said that existing parking is sufficient.

Helen Nielsen, who supports the complex, said the project has gone back years and many people have contributed to the final design.

During deliberations, council members raised concerns about construction mitigation and whether the civic complex would generate enough funding to pay for itself and eventually make money, if the parking lot should have paid stalls, and whether the community and major stakeholders have been consulted through the process.

County Managing Director Sandy Baz said that if the bond funds are not used for the project they cannot be transferred to another community project, such as affordable housing.

“The state and IRS have regulations as far as what they can be used for.”