Bill to limit tour boats at Molokini sails through Legislature 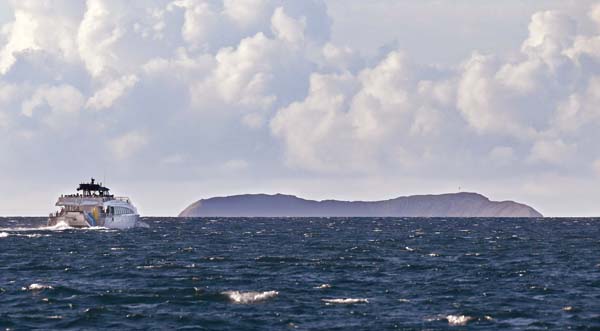 A tour boat motors toward the island of Molokini in February. A bill that would limit commercial permits to 40 for marine life conservation districts not accessible by land such as Molokini crater was approved in committee by state lawmakers Friday. The latest version of HB 1133, supported by commercial tour boat operators, now heads to the state House and Senate for full votes. -- The Maui News / MATTHEW THAYER photo

A proposal to cap the number of permits and moorings for commercial tour boat operators at Molokini crater and other protected marine districts in Hawaii is sailing through the state Legislature, with lawmakers voting for its approval during committee meetings Friday.

The bill, less stringent than what the state Department of Land and Natural Resources was seeking months ago for Molokini, would cap commercial tour boat operators for any marine life conservation district not accessible by land to no more than 40. It would also only allow access by half of the permittees at any given time. Currently, there are 40 commercial permits for Molokini and 24 moorings.

Earlier this year, the DLNR had floated the idea to reduce permitted tour boat operators allowed at Molokini from 20 to 12, citing area fish displacement and visitor overcrowding concerns. Scores of commercial boat operators at a Kihei Community Center meeting in March protested the reduction.

The bill now goes to the full House and Senate for final action.

Testimony from tour boat operators supported the bill, saying that it will help keep unpermitted vessels out of the crater and continue to allow permitted operators to work together during morning prime-time hours for snorkeling and diving.

“This legislation will ensure that Molokini Shoals MLCD (marine life conservation district) remains pristine and accessible in the future,” James E. Coon, Ocean Tourism Coalition president and a founder of Trilogy Excursions, said in written testimony. “Finally, it ensures that 40 Molokini permit holders will each have adequate time in the crater to conduct their tours and deliver the world-class experience our guests deserve.”

Citing a 2016 study that links more people to fewer fish, DLNR’s Aquatic Resources Division presented information on overcrowding and fish movement to a group of more than 100 people, representing commercial tours, environmentalists and Native Hawaiians, on March 21 at a meeting in Kihei. DLNR said that the protected Marine Life Conservation District drew more than 360,000 snorkelers and divers last year, an increase from previous years.

Several people during the meeting expressed the need to increase cultural and environmental education for visitors on Molokini tour boat operations.

The Molokini Marine Life Conservation District, established in 1977 as a highly unique offshore islet, set rules in 1995 to limit commercial permits in an expiration system designed to prevent future uncontrolled growth, according to DLNR.