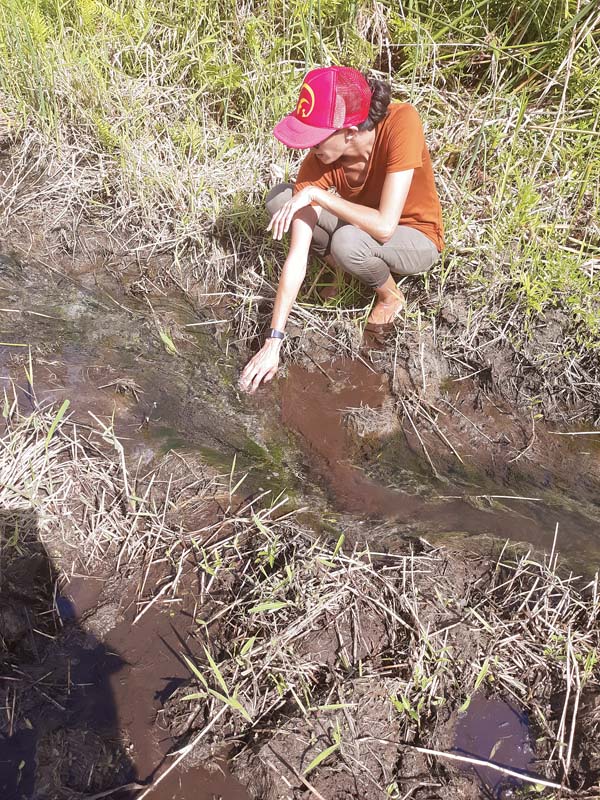 During a site visit Wednesday, Honomanu Restoration Project coordinator Napua Hueu explains how it took three weeks to break through the overgrown vegetation to revive a section of the Honomanu stream. -- The Maui News / DAKOTA GROSSMAN photo

HANA — After years of overgrowth, stream diversion and watershed mismanagement, taro patches in Honomanu Valley are on a path toward restoration, according to a group of East Maui residents working to clear the area and replant taro.

At the site of the Honomanu Restoration Project on Wednesday, project coordinator Napua Hueu said that the ultimate goal is to “restore stream flow and make a genuine reach for food security.”

With the expertise of Thompson Nawai Aipa-Rivera, field manager, as well as Kamalani Pahukoa, the project’s community organizer, Hueu said they hope to implement 12 taro patches within the next six months.

One taro patch is in the works so far, with the first batch of taro seedlings planted Saturday.

Aipa-Rivera, a taro farmer and cowboy, joined the efforts of the project back in August before moving to Maui from Kauai in September. He said he will volunteer his time on the project until the invasive species have been removed, even if it “takes a lifetime.” 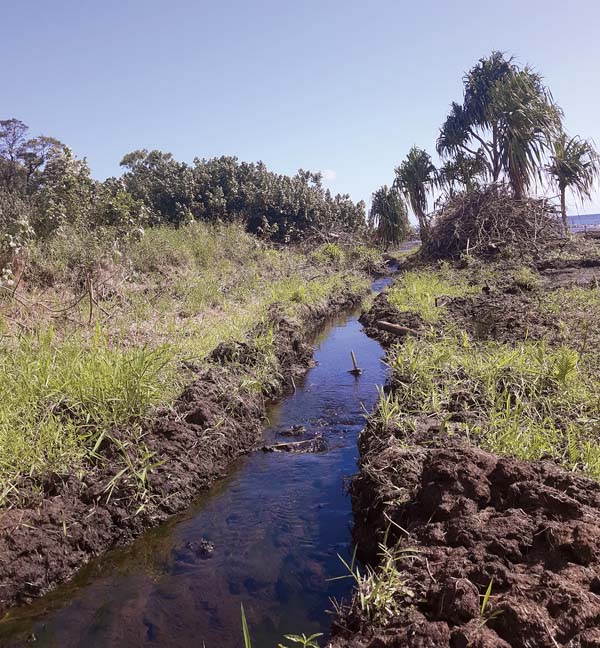 Water flows through Honomanu Valley and reaches the bay, a result of community efforts and the leadership of native tenants. -- The Maui News / DAKOTA GROSSMAN photo

“I estimate it will take two to five years to return this valley to its previous abundance, and the timeline is dependent upon how many hands show up to share in the responsibility of that,” he said. “But at the same time, it is a long process and after restoration is preservation, which is a generation after generation process.”

Official and organized efforts to restore a parcel of Honomanu Bay began Jan. 29. An email was also sent the following month by native tenants to various relevant entities — Maui County, Alexander & Baldwin and the Maui Police Department, for example — to notify them of their intentions to revert the land back its original purpose.

Hueu said that they have begun the process of removing invasive species and the mass plant overgrowth caused by an estimated 75 years of neglect. The project also includes the reconstruction of the auwai irrigation system, which will take many hands to do so.

“Volunteers are currently mediating unimaginable layers of cane grass and tangles of hau which have consumed stream beds and buried the infrastructure,” she said.

It took the crew three weeks to locate and revive parts of the stream’s veins, using mostly their hands to dig through the overgrown wetlands. They started from the Honomanu beach shoreline and navigated their way inland by following the stream’s rock bed. 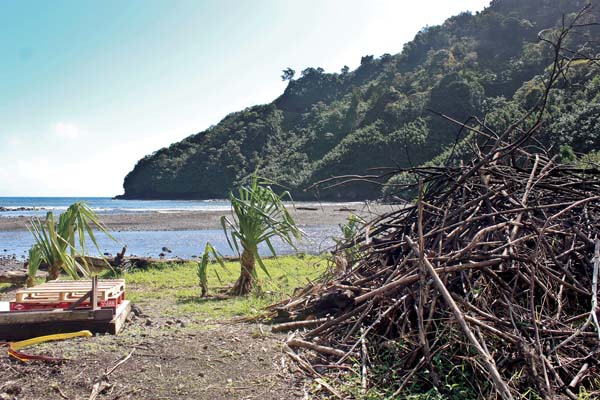 A stack of cut cane grass and sticks pile up by Honomanu Bay as volunteers make progress to restore the wetlands. -- The Maui News / DAKOTA GROSSMAN photo

A family cow was also brought down to the site to break down and eat the cane, she added.

The project has a water and shoreline study, which showed positive results over a short period of time.

“I recently took samples of a fern and bulrush,” said Skippy Hau, aquatic biologist at the state Department of Land and Natural Resources’ Division of Aquatic Resources. “It appears that as they cleared the overgrown vegetation, it has opened up space so these plants can grow. I don’t think of it as a comeback, but with removing the shade and increasing space, these and other plants can grow under wetland conditions.”

The Honomanu Valley is composed of the Kolea and Honomanu streams, which are home to many native fish, plants and other marine animals.

For nearly two decades, community members have fought to restore water to East Maui streams. In 2001, a group of taro farmers, fishermen, hunters and practitioners known as Na Moku Aupuni O Ko’olau Hui filed a petition to amend the flow of 27 East Maui streams, most of which had been diverted by A&B for sugar cultivation since the 1870s.

However, on June 20, the Hawaii Commission on Water Resource Management issued new interim in-stream flow standards, a decision that “will return free flowing water, with no upstream diversions, to all streams which have historically supported significant kalo cultivation,” the commission said.

The commission ordered no upstream diversions for 10 streams, and limited or no diversions to seven other streams, including Honomanu, a recognized habitat stream.

“Maui’s struggle with water rights very much parallels Kauai’s situation, so I am very familiar with the subject,” said Aipa-Rivera. “I participate in the legislative process to an extent, voicing my position; however, I choose to exercise most of my direct action through ahupua’a restoration work.”

Hueu and her half-sister, Pahukoa, said that they are lineal descendants of Royal Patent holders of Honomanu Valley (land grants conferring fee-simple titles to government land), and on behalf of their family, they are determined to promote agricultural restoration.

Looking at the big picture, they hope that the Honomanu project will inspire Hawaii communities to try self-sustaining farming methods and healthy eating.

“It’s possible for Hawaii to shift back to becoming more self-reliant and that can happen through a resurgence of self-sustaining farming,” Aipa-Rivera said. “I recommend planting food that grows well under the conditions of your area and to plant food that you desire to eat.”

For updates and information on the Honomanu Restoration Project or to sign up as a volunteer, visit www.kuahawaii.com or contact the project via email at aloha@kuahawaii.com.