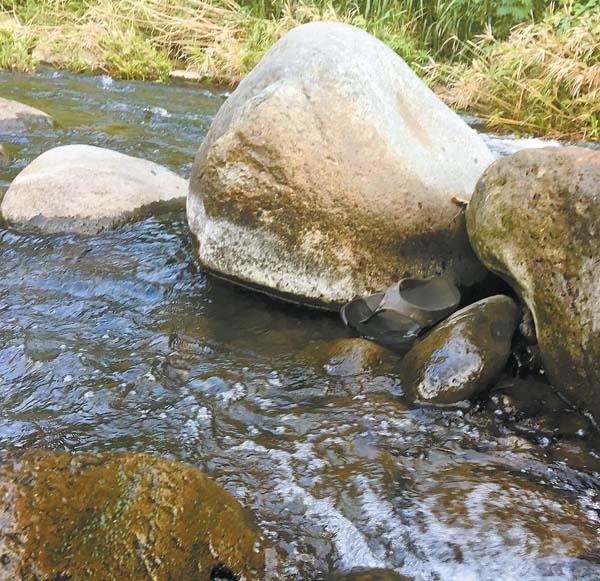 West Maui’s Honokohau Stream, with a water level below normal flow indicated by the top of the white line on stream rocks, is pictured late last year. Two West Maui groups have filed a complaint alleging that vital Honokohau water that could be used for downstream farmers and to restore habitat is being wasted by Maui Land & Pineapple Co. and Kaanapali Land Management Corp. WILI WOOD photo

During a time when water rights issues are boiling over throughout the state, two groups representing West Maui taro farmers, environmentalists and families filed a complaint last week reporting that three companies are wasting water from Honokohau Stream.

The 16-page document alleges that Maui Land & Pineapple Co., along with subsidiary Kapalua Water Co., and Kaanapali Land Management Corp. failed to properly maintain infrastructure and surrounding land that diverts water from Honokohau Stream. Because of this, vital water is being mismanaged and dumped, leaving kalo farmers without enough for crops and negatively impacting area land and water ecosystems, according to the complaint.

“With the governor trying to strong-arm water leases . . . all we are asking for is the state follow through with its constitution,” Kekai Keahi of Ka Malu o Kahalawai said Thursday. “It’s pretty simple. We not being selfish. We are just asking them to follow what the state constitution says instead of making backroom deals that doesn’t involve the public.”

ML&P and KLMC did not return phone and email requests Wednesday and Thursday for comment on the complaint.

The complaint said that Honokohau ditch, whose intake and diversions are located on ML&P lands, diverts most of the Honokohau Stream water to areas between Lahaina and Kaanapali. Through its subsidiary Kapalua Water Co., ML&P provides private water services, mainly in Kapalua. KLMC has revocable permits for state land where the ditch runs, including areas where water was wasted, according to the document.

Claiming that water has been wasted for about a decade, petitioners said severe mismanagement surfaced late last year. At that time, water dumping peaked and created a new stream through the Hahakea-Wahikuli gulch area that exited at Hanakaoo (Canoe) Beach, they said. Two of the groups’ petitioners have photos and video from that time, showing water running through fields, over cane haul roads and down the gulch. Reports said that stream fish were floundering in the fields.

Aside from kalo farming and cultural practices, the natural flow of water is vital to the stream and ocean ecosystems, especially during climate change, petitioners said.

“Today, with global warming, sea level rise and saltwater intrusion occurring in our small island’s fragile aquifers, it is very unwise to be wasting such a valuable resource as water,” said Wili Wood, a Honokohau kalo farmer and Ka Malu o Kahalawai member. “This imposes a great level of responsibility on the people chosen or hired to be stewards of our future. . . . Now is the time to make sure that tomorrow’s streams are still flowing clean and abundant (with) life.”

Complainants are asking that the state require ditch operators to upgrade diversions so more water can stay in Honokohau Stream during high-flow times. They are also seeking improved maintenance to ensure gates that allow water to return to the stream are free of debris and opened at appropriate times.

“Another solution might lie in investing in sealing the current diversion and installing a gate with remote control capacity,” the complaint said. “Petitioners note that Kamehameha Schools has installed a remote control valve to control a gate above Kahoma stream that can be controlled via computer.”

The complaint has been filed amid a major shift in water permitting for state land, where a law that allowed the issuance of revocable one-year permits is set to expire this year. Despite support from Gov. David Ige, bills that would have extended the time for the permit holders to come into compliance were shot down in the state legislative session, which ended Thursday. As the state transitions away from more than a century of big agriculture that controlled much of the water, water conflicts are continuing to define how the natural resource is managed and appropriated.

“I no like leave this place with my haumana (students) having to fight for the same thing,” said Keahi, a Lahaina Intermediate School teacher. “You’re on an island with limited resources, why wouldn’t you manage your resources? . . . Island people know how to live on the planet Earth more than anybody else because Earth is an island in the universe.”

The water commission is required to take up the complaint, but no timeline for the proceedings has been released, according to Bianca Isaki, an attorney working with Collins.