$823.6 million for next fiscal year heads to Victorino’s desk 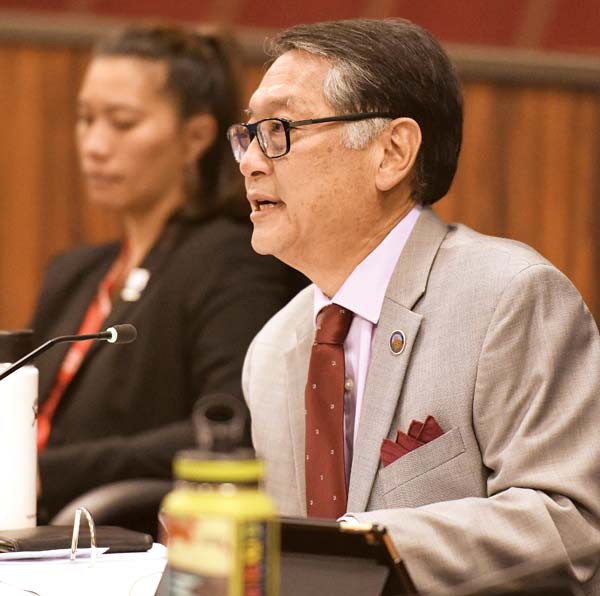 WAILUKU — The Maui County Council passed the county’s largest budget in recent memory at $823.6 million on second and final reading on Tuesday.

The final vote was 7-2, with Council Members Riki Hokama and Yuki Lei Sugimura the only opposition. The full council had until June 10 to pass its version of the budget, otherwise Victorino’s proposal would have taken effect.

Maui County Communications Director Brian Perry said Tuesday afternoon that Victorino has not had a chance to see the final budget passed by the council and reserves comment until he completes his review.

The fiscal 2020 budget includes close to $671 million for operations and about $153 for capital improvement projects. In addition to the operating and CIP funds, the council earlier this month passed a resolution for real property tax rates that include near across-the-board increase for property owners, except for those in the apartment and agriculture categories. Hotels and resorts would see the highest increase from $9.37 to $11, or 17 percent more, along with short-term rentals, which would see an increase from $9.28 to $10.75, or 16 percent more. Homeowners would see a bump from $2.85 to $2.90.

All rates are based on $1,000 of net taxable assessed value.

The new real property tax rates would bring in about 5 percent, or close to $18 million more than Victorino’s property tax proposal, which mirrors current rates.

The council rates are expected to garner about $358 million in revenues, compared to about $340 million in Victorino’s plan (both numbers are with circuit breaker adjustments).

During its special meeting in council chambers on Tuesday, the council also approved four housekeeping amendments, including changing the definition of biodiesel blends to mean mixtures of fuel that contain 20 percent or more biodiesel.

Hokama and Sugimura opposed the full budget because both wanted more information and clarity on how calculations were made and a list of changes. Hokama in a news release last week said he supported some of the additions made by the Economic Development and Budget Committee, but wanted to see more done to reduce the budget “rather than just raise taxes to increase the spending.”

On Tuesday, Hokama noted that the differences between himself and other council members was not on a personal level but rather on issues and items.

“We haven’t disagreed as people on personal matters,” he said. “I appreciate that.”

But he noted he wasn’t voting in favor for the budget operations bill, as he is still unable to answer community questions on how the council handled taxation this year and noted that while all other counties across the state also increased their budget, Maui County fared a little bit better than others when it came to natural disasters last year and those counties were more impacted financially — though Council Member Tamara Paltin pointed to the wildfires that hit her district of West Maui during Hurricane Lane.

For next fiscal year, Maui County’s budget would increase spending by 8.6 percent; Hawaii County is looking to increase by 12.7 percent; Kauai County 10.7 percent; and the City and County of Honolulu 8.6 percent, according to the Grassroot Institute of Hawaii, a nonprofit public policy think tank.

“I expected our budget to be different from our three sister counties,” Hokama said.

He added that he was also concerned that council members didn’t clearly show the adjustments they made to the budget at the time that the changes were made.

Sugimura reiterated Hokama’s concerns about not being able to tell community members the changes made during the budget review process. Earlier in the meeting, Sugimura had queried Rawlins-Fernandez about the questions that Hokama had sent to the budget committee chairwoman regarding the budget process.

Rawlins-Fernandez said that information for some of the questions could be found in the budget documents and that other information he was seeking was not part of the budget process this year.

Before Tuesday’s meeting, she said the county “should have had a comprehensive budget software to make developing and tracking the budget much more transparent for the public years ago.” She pointed out that budget software has been included in the fiscal 2020 budget so the process will be easier to track the next time around.

On Tuesday, the freshman lawmaker called this year’s budget a “collaborative effort” that addresses many of the needs of the community now as well as into the future.

“I’m so proud to be part of this council that has the foresight and courage to really address the needs of our community, without continuing to kick the can down the road,” she said. “This council has taken it head-on.”

Council Chairwoman Kelly King said she agreed with “pretty much everybody” on their sentiments on the budget and thanked Hokama for his thoughts.

She called the council “bold” to take the big steps knowing it was a large budget increase, but not as much as other islands.

King said the council has funded solutions for homelessness, climate change and organizations that include nonprofits.

Council Member Mike Molina said that “no budget is ever perfect,” but he echoed King’s thoughts and pointed to funding for infrastructure concerns, invasive species and emergency services.

“It costs money,” Molina said. “None of us here went into taking this job with (wanting) to raise taxes.”