‘Lady of the Mountain’

Mary Evanson, known for her love and advocacy of Haleakala, dies at 97 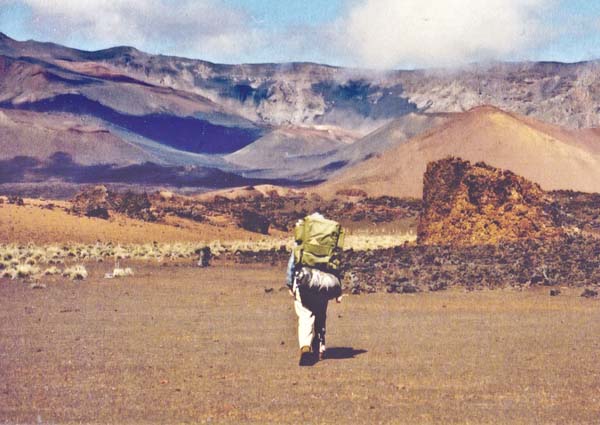 Mary Evanson hikes across the Haleakala Crater floor from Kapalaoa Cabin to Holua Cabin. Evanson last hiked in the crater at age 86, her family said. She died May 9 at age 97 after decades of protecting the environment, with a special focus on Haleakala. The Maui News file photos

The woman who has been called the “lady of the mountain” for her fierce protection and love of Haleakala has died.

Longtime environmentalist Mary Evanson died at the age of 97 on May 9 at her Kokomo home under hospice care, said her son, Bill Evanson.

Evanson, who founded the Friends of Haleakala National Park advocacy and educational group and fought for environmental causes from mauka to makai, began losing weight and wasn’t eating starting in February, Bill Evanson said. His mother went to the hospital, but later came home to hospice care.

“She didn’t suffer,” Bill Evanson said, adding that “it’s still hard to believe she is gone.” 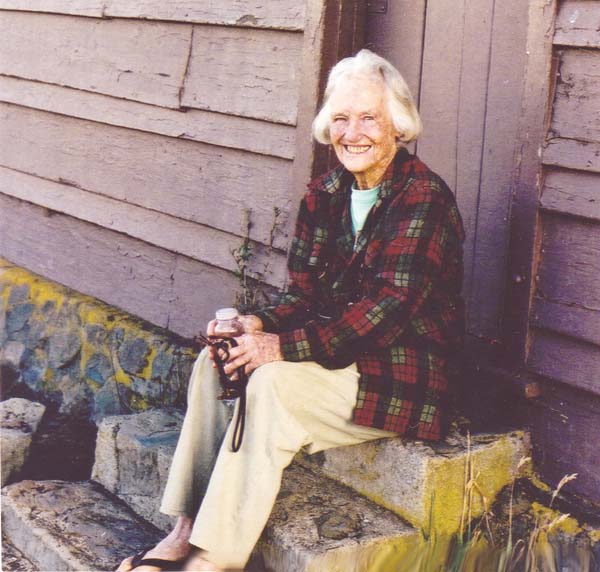 Mary Evanson, a fierce protector of Haleakala, sits on the steps of Kapalaoa Cabin during a trip to the crater.

Friends recalled her influence, her mentorship and her love of hiking that stretched well into her 80s.

“Mary was tiny (in physical stature), but her influence was gigantic,” said friend and fellow environmentalist Lucienne de Naie, whom Evanson mentored at the Sierra Club Maui.

“She took many people under her wing,” de Naie said, describing her relationship with Evanson. “She was such a generous spirit of all that she knew about Maui.”

Bill Evanson said his mother fought for Maui’s environment for decades, ever since she retired as a preschool teacher and director on Oahu and moved to Maui in the 1970s.

Besides protecting Haleakala, Evanson was involved in a myriad of causes, including protecting native species, endangered shorelines and imperiled water sources.

“She retired to come to Maui and blossomed and had a whole new different life,” Bill Evanson said. “She showed you can have a life after retirement.”

As the daughter of George McEldowney, a forest supervisor for the Hawaiian Sugar Planters Association Experiment Station in Wahiawa, Oahu, Mary Evanson was introduced to conservation work early on.

“He must have passed along something to her, a love for the land . . . she ended up getting later on,” Bill Evanson said.

In a 2002 Maui News story by former staff writer Valerie Monson, Evanson said that a word she remembers from her father was “conservation.”

“It just stuck in my mind,” she said.

Evanson also must have passed something along to her son, a longtime employee of the state Department of Land and Natural Resources and currently a Natural Area Specialist with the DLNR’s forestry division.

“I owe it all to her,” Bill Evanson said.

Before moving to Maui, Evanson began hiking with the Sierra Club on Oahu. While on the Valley Isle, she met up with hikers at the Haleakala National Park and Sierra Club on Maui.

Bill Evanson said that his mother began learning the history of the places she hiked, and she “just really came to love Haleakala.”

She called it “my mountain,” and would go on to count the crater’s silverswords, head up the adopt-a-nene program and write up the Friends of Haleakala group newsletter. She also questioned the need for more observatories on Haleakala, supported legislation to reduce helicopter noise in the crater, raised awareness of the miconia threat and spoke out against damage by commercial horse tours along the Sliding Sands trail.

In 1999, she became the honorary superintendent of Haleakala National Park for “outstanding sustained contributions.” She received an official hat and instant access to the superintendent’s office.

Evanson made her last trek into the crater at age 86.

Matt Wordeman, current president of Friends of Haleakala National Park, said in an email that “Mary was a fierce and tireless advocate for the environment.

“She was instrumental in the fight to slow the introduction of invasive species by stopping the expansion of the airport runways,” Wordeman said. “She also worked to keep the broadcast antennas away from the summit of the mountain. Mary’s tireless activism serves as an example for all of us who love Haleakala.”

He said many of the group’s core programs were formulated and launched by Evanson, including the service trip program and the adopt-a-nene fundraising program.

“As a board member trying to make a decision, I often ask myself, ‘What would Mary do?’ The answer is usually easy to find as Mary was never afraid to raise her voice and fight for what is best for Haleakala National Park,” Wordeman said.

Evanson’s work extended beyond Haleakala, included laying the groundwork for the Native Hawaiian Plant Society, Kanaio Natural Area Reserve and the Maui Botanical Gardens. She was an early member of SPAM (State Park at Makena), which saved Oneloa (Big Beach) and Puu Olai (Little Beach); as well as AHEM, the Alliance for the Heritage of East Maui, and the Sierra Club.

She also helped in replanting projects on Kahoolawe and in the Auwahi dryland forest — all tasks that she hoped would leave a legacy of conservation for future generations.

“I love that mountain,” Evanson said of Haleakala in a 2007 Maui News story by former staff writer Liz Janes-Brown. “And I want it to be protected for future generations.”