Company announces crops, does not specify water use 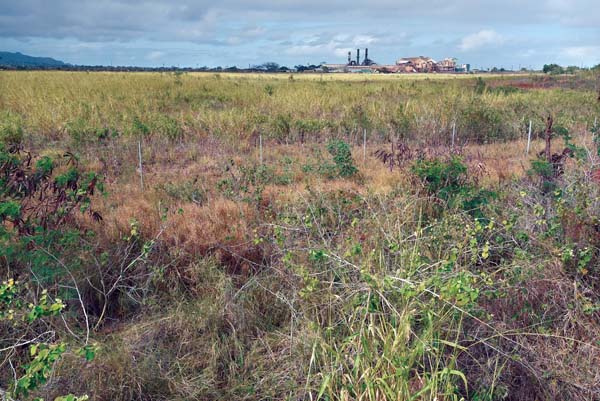 A field in Central Maui sits fallow, backdropped by the Puunene Mill, in December. Mahi Pono announced its plans today to grow potatoes, peppers and about a dozen other crops on 1,500 to 2,000 acres in Central Maui. The company will plant its first 400 acres in June. The Maui News / MATTHEW THAYER photo

Mahi Pono is preparing to plant its first 400 acres in June and has announced today its plans to grow avocados, bell peppers, potatoes and about a dozen other crops on 1,500 to 2,000 acres in Central Maui this year.

“This plan represents the first crops that Mahi Pono will plant in Hawaii,” said Shan Tsutsui, senior vice president of operations for Mahi Pono. “We are excited to return the land back to active agriculture production and provide more fresh produce options for local consumers with export potential.”

Tiare Lawrence, community relations director for Mahi Pono, said that the first 380 acres will include small and fingerling potatoes as well as bell and Anaheim peppers, which are good for the local market and are being planted to assist with soil health.

However, the company did not say how much water it would need for its crops this year, nor whether it planned to pursue a revocable permit or long-term lease from the state to allow East Maui Irrigation — of which Mahi Pono is part owner — to deliver the water to its fields.

Alexander & Baldwin currently has a one-year revocable permit from the state to draw water from state lands in East Maui and transport it to Central Maui and Upcountry. The permit runs out in December, and bills in the state Legislature that would have extended A&B’s ability to obtain future revocable permits failed.

“With the state Legislature coming to an end only last week, we are in the process of evaluating all of our options to secure the water needed to support farming and food production on these lands,” Tsutsui said.

A news release from Mahi Pono says that EMI delivers about 30 to 35 million gallons per day to Upcountry residents, Mahi Pono and other water users, but does not specify how many of those gallons will feed Mahi Pono’s crops.

Tsutsui said that in the coming months, “we will be sharing more details on our planting schedule as our plan is finalized and more land is prepared for cultivation.”

“Yeah, we can eat that,” he said of several crops. “If it’s for local consumption, then that’s great and I support that. I would like to see more ulu and taro and some other things that are more Hawaiian.”

Perez said he wasn’t bothered by the fact that Mahi Pono did not provide the location of the crops but said acreage by crop would be useful to evaluate water use.

“Not saying how much water they’re going to use doesn’t make sense, because the county’s usage is a known (minimal) quantity,” he said. “They should be able to back that out to arrive at their own water usage. Anyway, I think their overall usage is higher than needed for 2,000 acres, but we’ll await details.”

Overall, he said Maui Tomorrow has been “encouraged by their efforts thus far to rebuild the soil and are urging them to produce food for local consumption using sustainable agriculture methods, which can require half the water and little or no pesticides.”

Two different farm plan scenarios provided to state lawmakers earlier this year offered a glimpse into Mahi Pono’s possible plans should the company not secure a water lease from the state. In the first scenario, Mahi Pono would eventually cultivate 31,177 acres, including 22,577 acres of unirrigated grass-fed cattle operations, 3,750 acres of irrigated grass-fed cattle, 2,850 acres of tropical fruit crops and nuts, 1,000 acres of specialty and beverage crops and 1,000 acres of diversified agriculture, including a community garden and non-GMO energy crops. All told, the first scenario would require 27.25 mgd.

Over the next few months, Mahi Pono also plans to reveal more details about its community farming initiative, Tsutsui said.

Earlier this year, Mahi Pono Principal Ceil Howe III said that the community farm would help out local growers looking to rotate their crops. Farmers would have access to land, water, equipment and Mahi Pono’s management, budgeting and marketing services. Howe said that Mahi Pono was looking to place the farm near the old Puunene Mill.

Vincent Mina, president of the Hawaii Farmers Union United, was happy so far with Mahi Pono’s plans and its interactions with local growers. He said access to land, water and infrastructure are always issues for farmers, and Mahi Pono offers those things.

“I just really would like the community to take a breath and be thankful that an agricultural company that is not looking to monocrop, that is looking to use regenerative practices for the land, is actually owning the land now and has a very good relationship with the farming community,” Mina said.

Mina is on the advisory board for the community farm but said he is not an employee and does not get paid by Mahi Pono.

Mahi Pono also said today that it still is working to completely close off diversions and restore East Maui streams as part of a decision by the Commission on Water Resource Management last year.

Restoration of natural stream flow has been completed for Makapipi, Waiohue, West Wailuaiki, East and West Wailuanui, Honopou and Waiokamilo streams, the company said. Efforts to restore Palauhulu, Pi’ina’au, Haneho’i and Puolua streams are still in progress. The remaining work is scheduled for completion within the next one to two years.

In order to restore the remaining streams, the current diversion structures have to be modified, the company said. Mahi Pono/EMI has completed work on 29 diversions and secured permits to modify or permanently abandon another 30 diversions, with approval of the additional remaining 11 diversions under review by the commission.

Baldwin High School’s Kaipo Haole was 5-0 with a 0.96 ERA and 34 strikeouts in 28 innings in MIL play this season, allowing 10 hits and two walks. The Bears start defense of their state title with a quarterfinal game against either Waiakea or Saint Louis on Thursday at Maehara Stadium. The Maui News / MATTHEW THAYER photos

A field in Central Maui sits fallow, backdropped by the Puunene Mill, in December. Mahi Pono announced its plans today to grow potatoes, peppers and about a dozen other crops on 1,500 to 2,000 acres in Central Maui. The company will plant its first 400 acres in June. The Maui News / MATTHEW THAYER photo