UH economist: ‘It’s time to get used to slower growth’ 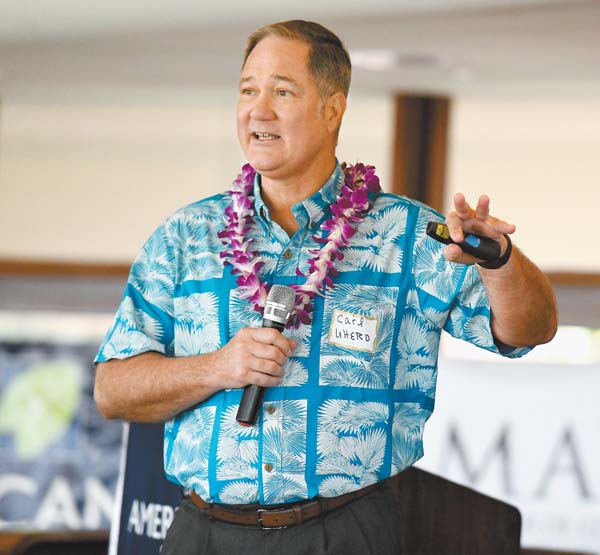 WAIKAPU — Maui broke its own records on visitor arrivals for four straight years and visitor spending for seven straight years. But in recent months, growth has slowed, and with it Hawaii’s tourism-dependent economy.

A temporary slip or a sign of things to come? University of Hawaii economics professor Carl Bonham says the latter.

“We’re sort of at this place in the business cycle where growth is just not going to be nearly as gangbusters as it has been over the last four or five years,” Bonham said Thursday at a Maui Chamber of Commerce luncheon for Small Business Awards winners. “And it’s important to realize that from the business-planning perspective, from the bank-lending perspective.”

Bonham, executive director of the UH Economic Research Organization, said that after years of record-breaking growth, Maui is headed back to more normal, pre-recession rates.

Signs of a slowing economy came in December, when both air arrivals and visitor spending dropped (1.2 percent and 6.8 percent, respectively) as compared to December 2017. The same thing happened in January (arrivals down 1.2 percent, spending down 13.8 percent) before February saw a slight uptick (1.5 percent in arrivals, 1.2 percent in spending).

The good news is that the U.S. economy has been doing “very well,” Bonham said. The country is on pace to hit 10 straight years of economic expansion in June — the longest on record.

“That really underpins Maui’s economic growth, because, I don’t have to tell you this, but last year almost 80 percent of visitors to Maui were from the U.S. Mainland, which is a real blessing when the U.S. Mainland is doing as well as it is,” Bonham said.

Last year, visitor growth got off to a hot start statewide before “everything just stalled” during the summerlong eruption of Kilauea. Hawaii island’s economy didn’t just stall; “it collapsed,” Bonham said.

And, while the eruption didn’t directly impact Maui, the whole state experienced the economic aftereffects, as visitors who might have gone to Hawaii island and made other stops in the state canceled their plans altogether.

Bonham said there’s been some recovery and that he was “cautiously optimistic,” but growth this year may be half as much as it was last year — 3 percent as compared to 6 percent.

“We’re talking about an economy that’s operating at a very high level but not likely to grow very much anymore — probably past the peak of growth,” Bonham said. “And, we really couldn’t have had a better time for Southwest Airlines to come into the market.”

Southwest debuted at a time when visitor arrivals and spending were slowing but airlines were still flying roughly the same number of seats, “which means we came into the beginning of this year with excess capacity, and then we got Southwest,” Bonham said. Seats booked for Kahului are looking up almost 7 percent this year.

But, it’s not about how many people come to Maui, it’s about how much they spend, and “the problem is that spending fell even more abruptly last year and is continuing to fall,” Bonham explained.

“In real dollars, visitor spending has been falling since the second quarter of last year,” he said. “And that hasn’t happened before. . . . You tend to see this at peaks where arrivals continue to go up at a slower rate and spending goes down. And our forecast is for some recovery but actually a down year for real spending.”

“This is sort of the new normal, is smaller increases in jobs that’s consistent with the overall growth in population,” said Bonham, adding that population growth is slowing on Maui.

All counties in Hawaii have experienced rising unemployment. Maui County “bottomed out” at 2.2 percent in December 2017 but unemployment has now risen to 3.1 percent, Bonham said, according to UHERO’s seasonally adjusted data. While that’s still not very high and businesses still struggle to find skilled workers, it means Maui County is approaching pre-recession numbers: from 2000 to 2007, the county averaged 3.4 percent unemployment.

Bonham said the good news is that Maui County has led the state in job growth. From 2007 to 2010, the county suffered an 11 percent loss of jobs, the worst in the state. By 2018, the county had grown jobs by about 20 percent, “way more than anyone else.” Bonham predicted the county would go from more than 2 percent job growth every year to 1.5 percent growth over the next several years.

“Maui is well-positioned for a slowdown, and it makes sense that you should have a slowdown after a run like this,” he said. “This is really the main takeaway — it’s time to get used to slower growth.”