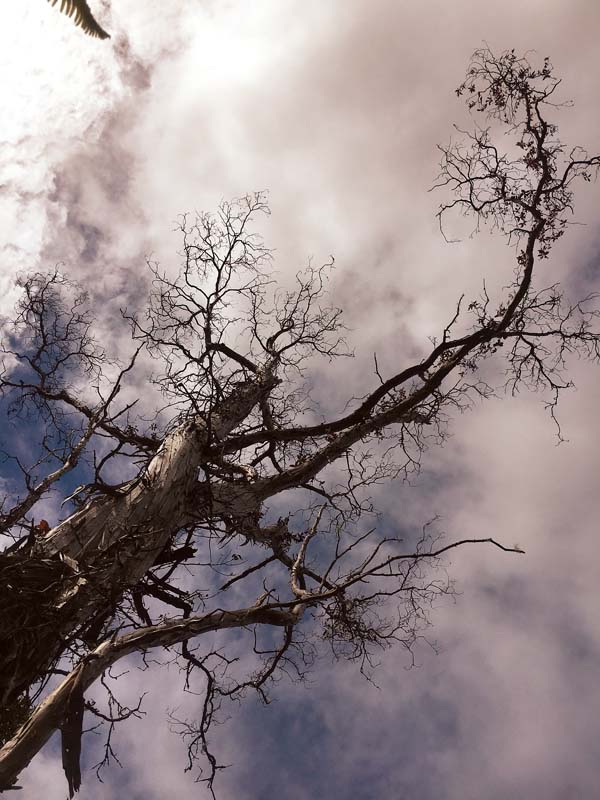 An ohia stands tall in Kauai, but not for long after being tested positive for C. Huliohia (slower moving fungus of rapid ohia death). The tree was spotted during an aerial survey by using digital surface model techniques. Photo courtesy of The Nature Conservancy on Kauai

While rapid ohia death threatens Hawaii island and Kauai, conservationists are cracking down on keeping the disease from spreading to Maui.

“It’s a scary disease. The impacts to Hawaii island are immense and saddening,” said Alison Cohan, director of Maui Nui Forest Program and coordinator of the Maui Nui Rapid Ohia Death working group. “We certainly do not want it in Maui Nui, but there is a chance that it is already here and not detected. At the same time, scientists are working around the clock to do this research and hopefully start growing ROD-resistant ohia to eventually replenish some of the decimated forests.”

Earlier this year, aerial surveys for the disease covered 1 million acres of ohia forest across Hawaii island, Kauai and East Maui. Lissa Strohecker of the Maui Invasive Species Committee confirmed via phone last week that there are no traces of rapid ohia death on Maui. But Strohecker and others also have pointed out in the past that Kohala, where the disease was detected in 2017, is only 40 miles from Maui.

Rapid ohia death, a fungal pathogen that can kill an ohia tree very quickly, was discovered on Hawaii island in 2014. A more severe case of the disease was found last December on Kauai.

According to the Hawaii Invasive Species Council, ohia makes up approximately 80 percent of the state’s native forests. 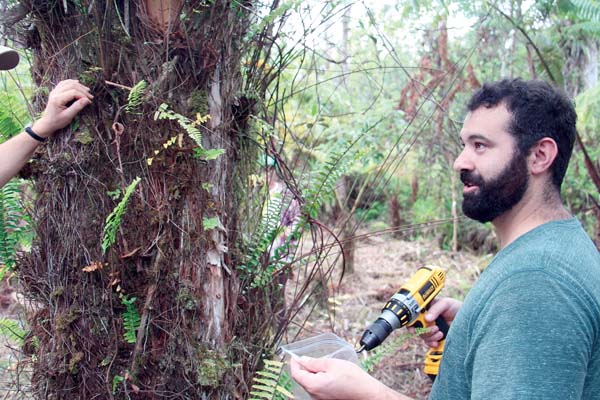 Wade Heller, a postdoctoral molecular biologist with the UH-Manoa College of Tropical Agriculture and Human Resources, takes samples from an ohia tree located in the Puna Forest Reserve in Hilo. Samples are tested for rapid ohia death. University of Hawaii at Manoa / J.B. FRIDAY photo

The fear is caused by how quickly the disease can spread. Cohan said that people can accidentally spread the disease by moving infected ohia or soil, and that the state Department of Agriculture prohibits the transport of high-risk items from infected islands except by permit.

The department reminded travelers about the ohia quarantine last week before the Merrie Monarch Festival in Hilo and ramped up inspections at Hawaii island airports during the weeklong event.

“It is critical that people also sanitize their gear if traveling from Hawaii island or Kauai to an island without detected ROD, like Maui,” Cohan said. “This ideally would mean not bringing shoes, rain gear and clothing, tools or camping items back to Maui from the ROD-infected island. If one must bring some of these items, decontaminating the gear by thoroughly washing, scrubbing boots and spraying all items with 70 percent rubbing alcohol, can reduce the likelihood and viability of the disease.”

In addition to monitoring travel and cleaning gear, Cohan suggests to not cut, step on or damage an ohia plant in any way because the fungus can enter through the wounds and infect the whole tree.

“We are very concerned about ROD and want to stay on the front lines of knowledge and tools to battle and prevent ROD,” Cohan said. “We work hard to ensure that there are zero pigs or deer in our preserves and also fight the never-ending fight of killing invasive weeds . . . in addition to working with partners to conduct research, rare plant work, and monitoring, and maintaining a community outreach and volunteer program.”

The state Department of Land and Natural Resources conducts quarterly aerial surveys of East Maui as continual safety measures. The $250,000 surveys were funded by the Hawaii Tourism Authority, which has provided more than $400,000 over the past year to support rapid ohia death initiatives, including sanitary stations and signs at trailheads, bio-sanitation workshops and the annual Ohia Love Fest in Hilo.

The airborne observations covering 1 million acres of forest earlier this year were completed by the Arizona State University Center for Global Discovery and Conservation Science in Hilo. They utilize a high-tech aircraft that collects data through highly accurate mapping and detection equipment.

“The mapping will continue to increase our knowledge of the rate, pattern and overall threat level of ROD in the Hawaiian Islands,” Dr. Greg Asner, leader of the ASU flight team, said last week in a news release. “We are very proud to be working closely with DLNR, the USDA Forest Service and all the organizations that depend on islandwide mapping results.”

The most recent data has not been analyzed yet, but Strohecker said that these quarterly tests by DLNR are conducted as “another level of confidence.”

“We have a strong partnership of conservation professionals looking for rapid ohia death on Maui, so we’re flying all the time,” she said. “If we see any suspicious trees, we sample. We send samples to Big Island for testing.”

There are three ways the pathogens could have appeared in Hawaii, and through genetic analysis, these pathogens have been linked to Latin America and Asia.

“They could exist, undetected, elsewhere, and only caused management problems when they were accidentally introduced to Hawaii,” Cohan said. “They could have mutated from another species or they could have risen from hybrids of other known or unknown species of Ceratocystis.”

Both Strohecker and Cohan said that the fungus can be spread wherever soil can be spread, so it’s important to clean all hiking gear, tools and cars after use.

Rapid ohia death gets its name for its ability to quickly take down a tree, sometimes within two weeks. Maui residents can do their part to help the island remain disease-free.

“If they have an ohia tree or if they’re aware of what ohia is, or if they have one in their yard or if they have a favorite hiking trail, we encourage people to monitor their ohia,” Strohecker said. “It’s easiest to detect by looking for a tree that just dies so quickly it doesn’t have time to lose its leaves.”

Other symptoms include entire crowns or leaves of ohia trees turning dark yellow or brown as well as fungus growing from the inside of the tree.

If potential symptoms are found, reports can be sent to the Maui Invasive Species Committee, along with photos and location of the ohia tree. DLNR helps the committee coordinate surveying and sampling.

* Dakota Grossman can be reached at dgrossman@maui news.com.