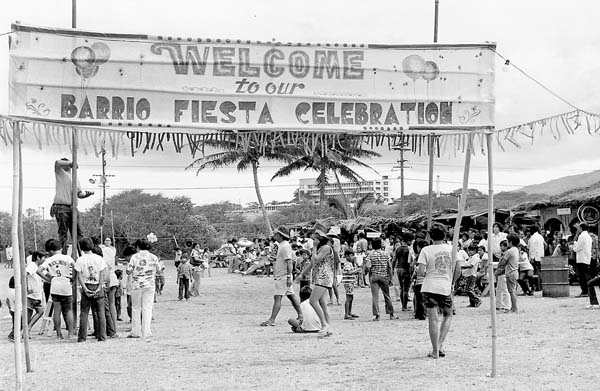 A banner hangs across the War Memorial Soccer Field in this undated photo of the Barrio Fiesta, which celebrates its 50th anniversary this year. Now the festivities are held at the Binhi at Ani Filipino Community Center. Barrio Fiesta photos

Fifty years ago, when an influx of Filipinos arrived on Maui, some of the younger immigrants struggled to adjust to their new American lives, cutting class and not wanting to go to school.

So, to integrate the new immigrants into the community, share their culture and “instill a sense of pride in local Filipinos of the rich culture of their motherland,” the Maui Filipino Community Council began the Barrio Fiesta, said Alfredo Evangelista, program chairman.

The first festival was held on May 31, 1970, at the War Memorial Complex. It has continued ever since, although the venue has changed. On Friday and Saturday at the Binhi at Ani Filipino Community Center in Kahului, the festival will celebrate 50 years.

“We’re very pleased to continue with the preservation of our Filipino culture by annually having the Barrio Fiesta,” said Nora Cabanilla-Takushi, president of Binhi at Ani, the festival coordinating organization. “The Barrio Fiesta is the longest running Filipino fiesta in the United States and we are proud to have it here on Maui.”

Because the Flores de Mayo (flowers of May) fiesta is celebrated in the Philippines during May, Maui’s Filipino community in 1970 decided to celebrate the Barrio Fiesta in May, on the Memorial Day weekend. 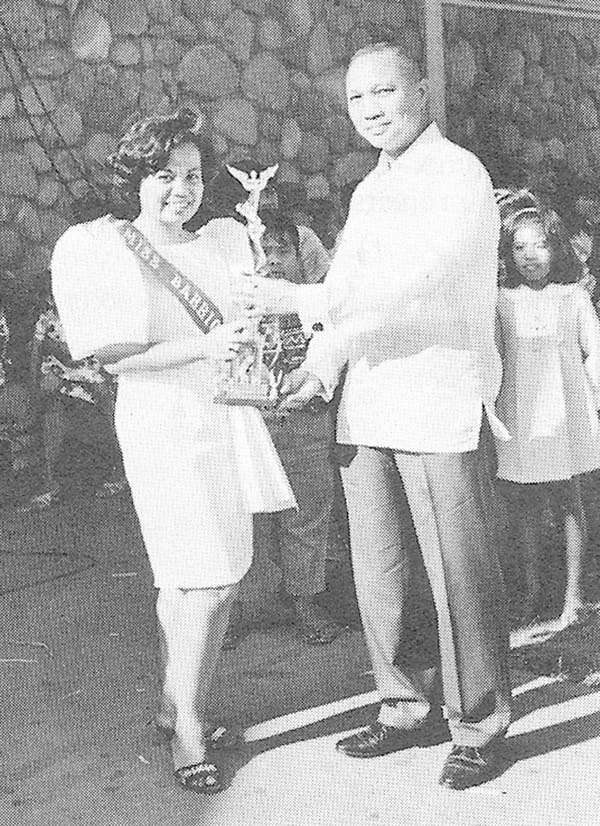 The 50th Barrio Fiesta will showcase Filipino culture, food, and entertainment — including Filipina comedian HappySlip — from 5-10 p.m. Friday and 10 a.m.-10 p.m. Saturday at the community center, across from Maui Waena Intermediate School. The Barrio Fiesta is also supported by a grant from the Maui County Office of Economic Development.

The Filipino community has come a long way since the first Barrio Fiesta.

Filipinos make up the second-largest ethnic group in the state, behind Caucasians, according to the 2010 U.S. Census. They’ve risen to becomes judges, politicians, doctors and community leaders.

Even as the Filipino community is well acclimated to the islands, they still feel it is important to perpetuate the culture.

“I’m very happy that we have this. This is the way we can promote our culture,” said Shirley Evangelista, who was the first Miss Barrio Fiesta in 1970 and is a cousin of Alfredo Evangelista.

The Kahului resident joked that her coronation was uneventful — an emcee called all women up to the stage who were dressed in barrio wear, then a couple of judges picked out the queen from the lineup.

Now the pageant and the attire has changed as well.

“Now the kids that come queen, they dress up in fancy outfits,” the 81-year-old said.

“I’m trying to decide what I’m going to wear,” she added. “They said I’m going to be the first one to march out.”

Evangelista, who noted she will probably have to use her cane or have an escort to walk on stage, will be part of Santacruzan, a religious procession depicting the finding of the Holy Cross by Queen Helena, the mother of the Roman Emperor Constantine, who ended the persecution of Christians. There are a number of “reynas,” or queens, in the procession.

Back at the War Memorial Complex where it all started, food booths were made to look like Filipino huts and, when state Department of Health rules were not so stringent, a whole roasted pig was put on display.

Shirley Evangelista said the festival “was like a county fair, almost.”

In the ’80s and ’90s, the festival attracted throngs of Maui residents to the food booths — built with bamboo from Keanae — on the soccer field next to the parking lot, while entertainment went on at a nearby stage.

Greg Peros, a retired Maui Police lieutenant who chaired the first festival with Agrifina “Aggie” Cabebe, known as the “mother of Filipino folk dance on Maui,” recalled the hundreds of people the event attracted.

“I cannot believe the crowd. Even when it was raining, it was choked with people,” Peros said. “It was great, I really enjoyed it.”

Peros said that the first festival hosted a basketball tournament that continues today. He said Filipinos like to play basketball and it was a way to reach out to the younger generations. Local teams were also encourage to join, he said.

Basketball games are mainly at the War Memorial Gymnasium, but the Binhi at Ani Filipino Community Center is the hub of the festival, even though doesn’t provide the visibility it had at War Memorial on busy Kaahumanu Avenue.

Alfredo Evangelista said that after 46 years, the costs of staging it at the War Memorial grew and the Binhi at Ani Board of Directors made the “difficult decision to move the festival to the center in 2016.”

“The move helped to stem the annual losses of the event, but necessitated other expenses such as renting large tents and equipment to ‘dress up’ the parking lot of Binhi,” he said, noting there are no longer imitation bamboo homes used as food vendor booths.

In 2017, some cultural aspects returned with a miniature bamboo hut inside the center surrounded by displays of Filipino culture.

Many of the original features of the festival endure, including the traditional Filipino food for sale like adobo, pansit, lechon, lumpia, cascaron and halo halo.

The grease pole contest, or the palosebo, is also still around. It’s a traditional Filipino game played during festivities in the provinces, Alfredo Evangelista said. Players must climb to the top of a long, greased bamboo pole to reach a prize.

This year’s cash prize for the winner will be $300, with smaller prizes for other participants, he said.

As usual, the festival will have its barrio wear contest; a replica of bahay kubo, type of stilt house native to the Philippines; and cultural villages depicting the varied regions.

Other special entertainment this year includes Filipina comedian and YouTube sensation Christine Gambito, who goes by the name “Happy-Slip.” She will perform at 9:45 p.m. Saturday.

Philippine Airlines is also giving away round-trip airfare to the Philippines each night.

This green kayak was found adift Tuesday about 5 miles off the coast of Olowalu, according to the U.S. Coast Guard. Anyone with information about the owners is asked to call (808) 842-2600. U.S. Coast Guard photo

Police solo bike officer James Burkett directs a driver to pull over after she was seen using a cellphone Tuesday morning on Makawao Avenue. Traffic officers are on the lookout for seat belt violations and other traffic offenses as part of the “Click It or Ticket” enforcement campaign that started Monday. The Maui News / LILA FUJIMOTO photos

Solo bike officer Timothy Hodgens prepares a citation for a driver who wasn’t wearing her seat belt during Click It Or Ticket enforcement Tuesday morning on Makawao Avenue. The stepped-up enforcement is continuing through June 2.

A banner hangs across the War Memorial Soccer Field in this undated photo of the Barrio Fiesta, which celebrates its 50th anniversary this year. Now the festivities are held at the Binhi at Ani Filipino Community Center. Barrio Fiesta photos