Volunteers turn to tech in search for Amanda Eller 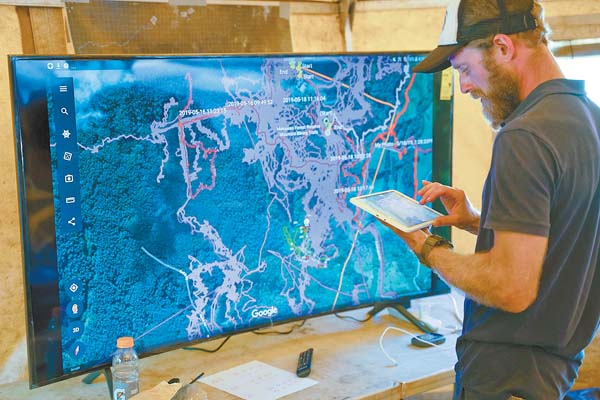 MAKAWAO — Most days, the Makawao Forest Reserve is a place where many go to unplug from technology.

But over the past 11 days, the rural forest has morphed into a hub of high-tech gadgetry in the search for Amanda Eller. Under white tents in the forest parking lot, volunteers are briefed and suited up with GPS devices. Search leaders armed with iPads bustle about onsite computers with live feeds and real-time data.

Technology and social media have been vital to the search for the 35-year-old Haiku woman, who’s believed to be lost in the dense, diverse terrain of the Makawao forest. And the Eller family hopes it will prove useful in future missing persons investigations.

“With the techniques and methodologies we’ve developed here, we hope to be able to transfer and improve for other search and rescue efforts and activities,” Amanda’s father, John Eller, said. 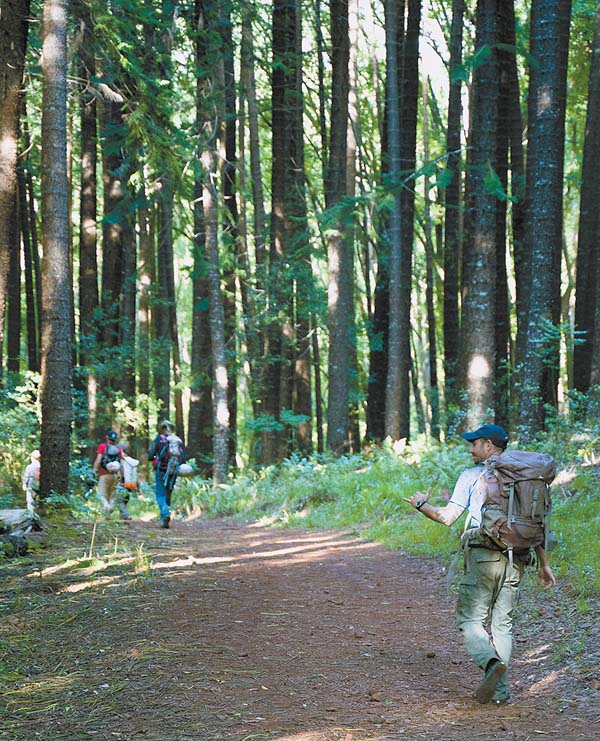 Rappeller Javier Cantellops heads out for another look Saturday. The Amanda Eller search effort has evolved quickly, as the team relies on new technology such as GPS tracking to saturate a map of the Makawao Forest Reserve.

When search coordinator Chris Berquist of Makawao showed up on May 12, he said the official search had been called off, and people were milling around without direction. He and others launched a coordinated effort to organize volunteers and track the search.

Fire Services Chief Rylan Yatsushiro said that the department used GPS in a limited capacity on the ground but used it during helicopter searches with an infrared camera. The flights were tracked and overlaid onto a map with the help of the county Planning Department’s GIS Section staff.

Base coordinator Joseph Montelongo wanted to boost ground tracking of the search when he showed up on Day 3.

“So I went and downloaded a GPS tracking app . . . did a run with a dog and brought it back,” the Haiku resident said.

Montelongo, who said he grew up with tech and volunteered with search-and-rescue efforts in California, motioned to the map room. “This is what we created,” he said. 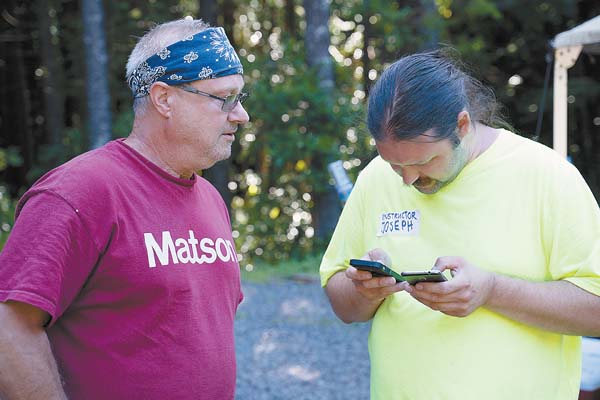 Scott Penn (left), Amanda Eller’s Haiku neighbor, talks with base coordinator Joseph Montelongo as he maneuvers information on a pair of smartphones Saturday. Penn has searched multiple times in the volunteer-led, tech-based effort that is relying on new media to plot map positions.

Berquist and Montelongo said volunteers since last Monday are being deployed with one of two GPS apps — one for iPhones and another for Android devices. Exportable KML data (a file format used to display geographic data) is needed for the live map.

“Then they can just put their phone away and that app is running; we’re getting GPS tracks off that,” Berquist said. “They come back to base, upload that data, and five minutes later it’s on our live screen.”

Over the weekend, the live map showed places highly saturated by searchers and other places that still need coverage. The goal is to have as much blue coverage in a square perimeter from where Amanda Eller’s vehicle was recovered, Berquist said.

The advanced work is a big departure from a paper map, colored with sharpie and highlighter, that Berquist said volunteers originally had after the official search ended. Next to the computers with live feeds and real-time data, search leaders equipped with iPads, laptops, smartphones, whiteboards and paper charts are tracking volunteers, hours donated, contact information for specialist searchers such as free divers and commercial drone operators, along with check-in and checkout times for people venturing into the wild.

Before embarking on their search, volunteers are briefed by Berquist and placed in groups for safety. He explains the digital map and strategies for covering the gaps.

The missing physical therapist and yoga instructor was last seen on surveillance video around 10:19 a.m. May 8 mailing a package at the Haiku Post Office, police said. Her 2015 white Toyota RAV4 left the post office parking lot at 10:21 a.m., according to police.

Her vehicle was last seen around noon May 8 at the gravel parking lot near the “Hunter’s Trail” at Makawao Forest Reserve, where friends say she often liked to run, hike and explore.

The vehicle was still there the morning of May 9 when police were called by her boyfriend, Benjamin Konkol, to report Amanda Eller’s disappearance. Police said last week that Konkol voluntarily took a polygraph test and passed and is currently not a person of interest. They also said Thursday that there is no evidence pointing to foul play in her disappearance.

John Eller hoped the search would lead to increased monitoring of rural and recreational areas.

“We’re going to prove this — we’re going to do things that prevent people coming into recreational areas like this that are completely unmonitored and creating an almost impossible search situation,” he said Saturday. “We are going to find a way to put up wildlife cameras in strategic locations, I’m hoping, with the support of (state Department of Land and Natural Resources). We expect this to be a civilian-led initiative. So we hope to leave this situation a little bit better.”

Family and friends have also relied heavily on Facebook to gather and distribute information. And while it’s aided in the search, it’s also had some negative impacts on family and volunteers. Sarah Haynes, a friend of Konkol and Amanda Eller, started an official Find Amanda Facebook page early in the search. Haynes and Konkol have come under fire by other Facebook users, and the Eller family addressed the accusations Saturday.

“Both Ben & Sarah have been formally cleared. Right now we don’t know if our daughter met with foul play, or is injured/lost. We ask that you please respect our wishes to refrain from accusations of anyone at all, and focus solely on gathering evidence/leads so we may save Amanda on time,” said the post, which is attributed to the “entire Eller family.”

Amanda Eller’s father, John, mother, Julia, sister, Alicia, and brother, Chris, who reside on the Mainland, are on the island to help search.

Berquist, who writes updates daily for the official search page, added that he tries to avoid social media but has been online looking at search information.

“I started reading the Facebook comments, they’re really savage,” he said. “Some are disgusting. But those aren’t the people who are getting out here and helping.”

Haynes, who became an advocate for missing persons and victims after her brother’s similar disappearance decades ago, said she didn’t know for days that people were accusing her online of foul play in the case. When she did read certain Facebook comments, it bothered her.

“I had a moment. And with my whopping four hours of sleep, I lost three of them,” she said Sunday. “It really damages the investigation.”

Still, Haynes said, she wants people to post and repost, because the site is “one big record.” Since the Eller family issued the statement, negative comments have died down, she added.

“We don’t need to be protected,” Haynes said, noting she and Konkol have already been cleared by police and the Eller family. “We need to find Amanda.”

Haynes, who said she continues to serve as a spokeswoman for the family, said technology is key during this time. She emphasized the need for video footage from May 8 in Makawao and in Haiku that can help fill out the timeline.

John Eller said the weekend and the days that follow are culminating in a big push, with many search dogs available until Tuesday. Volunteers of all levels are being sought. Base camp opens around 7 a.m. and closes at about 7 p.m. daily, according to the official search page, @amandaellersmissing on Facebook.