Indie feature filming for another week 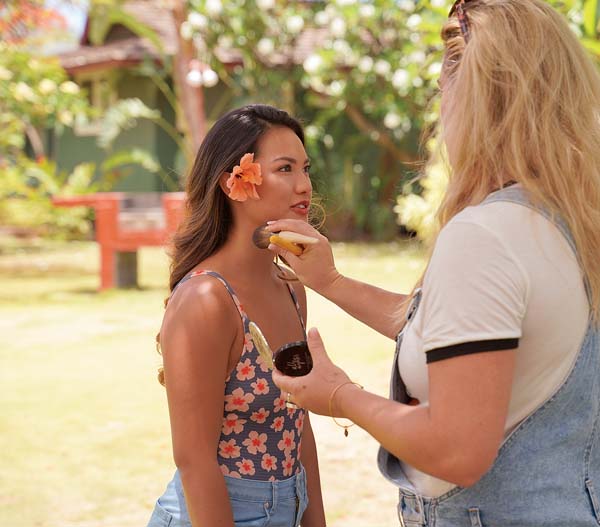 Up-and-coming Hawaii-born actress Taiana Tully gets some touch-ups between takes at “Aloha Surf Hotel” filming Saturday in Kihei. The local independent comedy, starring Augie T., brings celebrated Maui filmmakers Stefan Schaefer and Brian Kohne together again, along with some talent from their previous movies “Kuleana” and “Get a Job.” The Maui News / KEHAULANI CERIZO photos

The local comedian was busy pulling off his lines as the star of a new Maui film and juggling recordings for his daily Oahu and Kauai radio show — all while still cracking jokes during downtime.

The former boxer vowed to lose weight before the film is released. 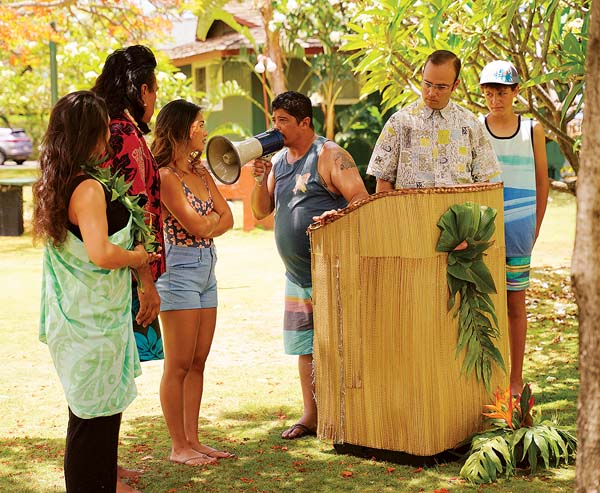 Augie T., one of Hawaii’s most beloved comedians, yells through a loudspeaker during filming for a scene in the upcoming “Aloha Surf Hotel,” an independent Maui comedy written, directed and produced by Stefan Schaefer.

Augie T., one of Hawaii’s favorite comics, along with Branscombe Richmond, Native Hawaiian actor of Hollywood’s “The Scorpion King” fame, and other local talent, such as rising star Taiana Tully, are filming around Maui for the latest feature-length indie by Stefan Schaefer and Brian Kohne.

“Augie . . . is delivering a nuanced, at times hilarious, and surprisingly emotional performance as the lead,” Kohne said. “There’s quite a bit of new talent getting their chance to shine, and the script is a delight.”

Fifteen shooting days around South and Central Maui will end next week; the film’s release is slated for 2020, according to Kohne. 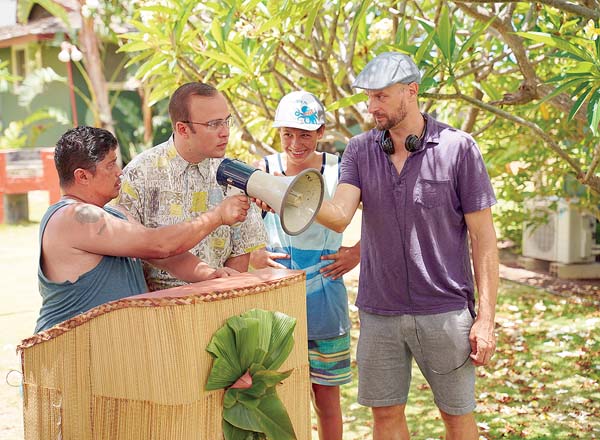 Schaefer is producer, writer and director; Kohne is executive producer; and Richmond is producer and actor. The team features many talents who contributed to previous films and offers several current University of Hawaii Maui College Creative Media students opportunities to work.

“I’m excited we have another one going and that we’re leveraging local talent,” Kohne said. “We are experiencing growth in front of and behind the camera. Probably half of the crew worked with us on ‘Get a Job’ and ‘Kuleana.’ A bunch of folks worked on ‘Hawaii 5-0.’ ”

Collaboration by Schaefer and Kohne has turned out some of the top Maui-produced films that the state has seen. “Aloha Surf Hotel,” a working title, follows the duo’s award-winning “Kuleana” (2017), a somber reflection on the changes in Hawaii, and “Get a Job” (2011), a slapstick comedy featuring Willie K and Eric Gilliom.

Schaefer said all three films showcase locals as the lead.

“I think this is happening all over the world; diverse faces are rising,” he said Saturday. “While we’re doing our own thing, it’s also part of a global movement. The world wants stories about all of us.”

Kohne echoed that “Aloha Surf Hotel” is a family affair, where friends and relatives are collaborating on the project, produced in partnership with GVS accelerator, a Hawaii media incubator. Richmond, for example, had his sons, daughter and even infant grandson helping out Saturday during filming.

“We are are so blessed to make family films and content here in wonderful Maui County,” Richmond said. “Ninety-eight percent of all filming is on Oahu. Two percent is on Neighbor Islands. It’s not much for us, right? We got to make our own.”

Much of the shoot has been in Kihei at the Nona Lani cottages and Kihei Charter School. The last few days, filming was held at Kanaha. The production will visit various Central Maui locations before wrapping up main photography next week.

YouTube star Alex Farnham, who hails from the Big Island, acts as Augie T.’s rival at the hotel, a charlatan yoga teacher.

Oahu’s Shawn Mokuahi Garnett of “Hawaii 5-0” and Matt Corboy of “Descendants” also have roles in the upcoming film.

Also, Nickelodeon’s Daniella Monet and her real-life husband play a tourist couple who get a “sketchy surf lesson” from Augie T.’s character.

In addition to the many talented cast and crew members, filmmakers said they are excited to be working with Augie T. as lead.

“He’s very talented,” Schaefer said. “There are a lot of layers he’s bringing to the performance.”

After 27 years of stand-up comedy, Augie T., whose full name is Augusto Tulba, gave his final major show earlier this year at Neal S. Blaisdell Center on Oahu in order to focus energy on other goals, according to the Honolulu Star-Advertiser.

Mentored by Andy Bumatai and Frank De Lima, Augie T. went on to become the only local comedian to sell out the Blaisdell and to win two Na Hoku Hanohano awards.

As a teen, Augie T. was an accomplished boxer. At 51, he’s still not showing any signs of slowing down.

“I wake up to them and I go to sleep to them,” he said, pointing to the crew. “These guys behind the scenes, they do a lot of the great work. I am blessed to be in front of the camera, but if it wasn’t for the guys in the back, this project we doing wouldn’t happen.”