Construction down on Maui since rental car facility finished

Most still employed but no more large jobs in pipeline 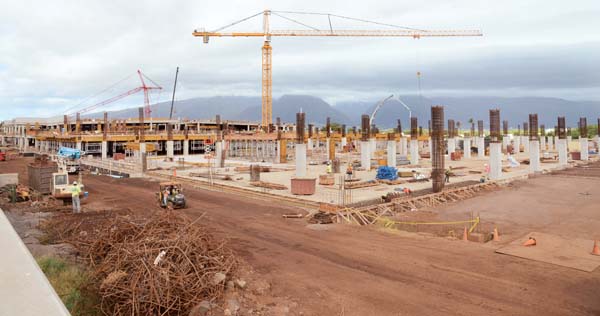 The framing for the Kahului Airport consolidated rental car facility is shown going up in July 2017. Since the completion of the project, construction work on Maui has tapered down. The Maui News / MATTHEW THAYER photo

Construction activity has “pulled back a bit” in most Hawaii counties, though remaining at a “healthy level” with a pipeline of public-sector, resort and residential projects, according to a state forecast update from the University of Hawaii Economic Research Organization.

Maui union and construction officials agree that current construction activity is down a bit following the completion of the big $340 million Kahului Airport Consolidated Rent-A-Car facility. There are no public works projects of that scale in the pipeline.

However, smaller housing projects continue, such as Kaiwahine Village in Kihei, Kahoma residential subdivision in Lahaina and Kahului Lani, a senior affordable housing project. There also is Maui Bay Villas timeshare project being built on the old Maui Lu site in Kihei.

“Most of the guys are working now,” said Bruce U’u, field representative for the 300-member Maui Chapter of the Hawaii Carpenters Union.

But he added: “I see more stuff kind of slowing down than starting.” 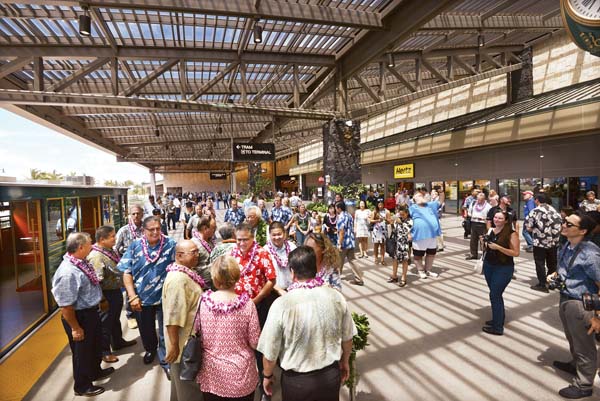 The $340 million, 1.3 million-square-foot, four-level consolidated rental care facility is dedicated on May 14. The building, which was paid for by car rental fees, is Maui’s largest-ever public works project. The Maui News / MATTHEW THAYER photo

The UHERO report summary said the mix of public-sector, resort and residential projects “will maintain industry activity near current levels for the next several years.” The full report said Maui construction jobs will remain at about 4,000 for the next few years, according to Pacific Business News.

UHERO will have an in-depth analysis of the construction sector in September.

Loren Osborn, president and owner of Maui-based Castaway Construction & Restoration, is seeing more of a downturn than the report reflects. The effects are greater for his company on Oahu than Maui, he added.

The lack of large projects is impacting his business, he said. Big construction companies that generally bid on multimillion-dollar projects are now bidding on smaller projects that his company focuses on.

“I see a lot of the bigger construction companies swimming in the smaller pools,” said Osborn, whose company was involved in the rental car facility construction.

The normal “frenzy” of bids by government agencies as the end of the fiscal year, June 30, nears has not materialized so far, Osborn said in an interview Monday.

Osborn has three other companies, Cooling Hawaii, Island Tile & Stone and Hawaii Electrical Solutions. His 150 workers are spread out over Maui, Kauai and Oahu.

Since the completion of the rental car facility, the Kihei high school is one of “the bigger jobs we have now,” said U’u on Monday. His members are waiting for the build-out of the project, which currently is in the infrastructure phase. Some carpenters are on board but many more will be employed as the walls go up.

There are projects on the books, but they will not be “as big as we seen in the past,” he said.

U’u said there was a good transition from working on The Westin Kaanapali Ocean Resort Villas to the consolidated rental car facility, which opened last month. The rental car facility had as many as 130 Hawaii Carpenters Union workers on the job, which also included drywallers.

He was pleased with the housing projects coming up. “We like those jobs,” U’u said. “Hopefully, some of our members qualify for that.”

Most currently are working, Greig said Monday. The jobs, though, are smaller government work, such as repairing sewer lines, he said.

The report said that improvements continue to be made to Lanai’s resorts, including a $75 million hydroponic agricultural operation and lengthening of Lanai Airport’s runaway paid for by Pulama Lana’i, which runs billionaire Larry Ellison’s operations on the island.