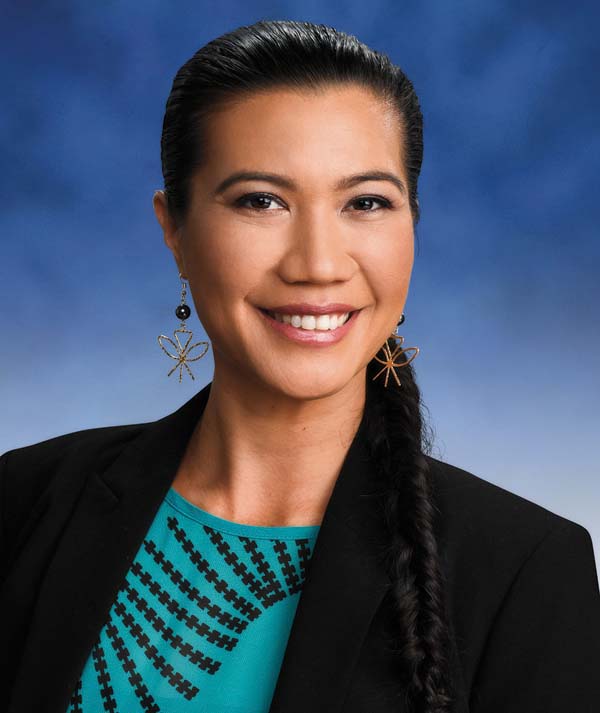 At a news conference Thursday, the head of the Maui County Council’s budget committee made a statement that ran contrary to previous reports — that the council’s budget was actually lower than the mayor’s.

“Unfortunately, we couldn’t give the mayor the $869.5 million that he asked for in his proposed budget, and in passing a budget that was $46 million less, I believe that we’ll still be fiscally responsible and meet the needs of the community,” Budget Chairwoman Keani Rawlins-Fernandez said.

The statement, however, proved untrue. Administration and council officials confirmed that the council’s operating and capital improvements budget of $823.5 million is about $43 million more than the mayor’s $780.8 million budget.

Office of Council Services staff said Tuesday that Rawlins-Fernandez was misled by a staff error. But in the days after the news conference, the budget chairwoman defended the comparison and criticized media outlets for reporting otherwise.

To understand the comparison, it helps to understand how the administration typically breaks down the budget. When the mayor releases the budget, funding is split into three main categories — county funds that include department operations and capital improvement projects, grant revenues that pull from outside sources like the state and federal government, and a revolving fund that is set aside for specific purposes.

County Budget Director Michele Yoshimura said that the administration doesn’t include the outside grants as part of the county’s revenue, because those funds aren’t guaranteed. The departments can’t use them until they actually get an award letter from the grantee. The council is then notified and the Finance Department creates an account to allow the department to use that money.

(While there are grants in the operating budget, Yoshimura explained that those are funds the county is giving out from county coffers, not grants the county is receiving from outside sources.)

It’s the same for special purpose revenues and revolving funds. These are monies that are generated from certain fees and must go toward a specific purpose. Thus, they’re never combined with the general operating budget to avoid misusing the funds.

“We keep those separate and earmarked for that specific purpose,” Yoshimura said.

That’s why The Maui News and other media outlets have typically referred only to operations and CIPs when reporting the mayor’s and council’s budgets. The other funds are either not guaranteed or not impacted by county taxpayer dollars.

To make the comparison to the mayor’s $869.5 million proposal (which includes $73.1 million in grant revenues and $15.6 million in revolving funds), one would need to add grants ($72.2 million) and revolving funds ($11.5 million) to the council’s budget to produce a grand total of $907.2 million.

In response to an email from a Maui News reporter asking for clarification after the news conference, Rawlins-Fernandez said Sunday that the $823.5 million budget did include “all non-County funding, state, federal, and private grants, etc.”

“I saw you write it down, you also recorded (it) with your phone, so I’m not sure why you’re still confused about this,” Rawlins-Fernandez said. “You’ve compared the mayor’s $780.8 County-only funding budget to our all inclusive budget, comparing apples to oranges. Comparing our $823.5M to the Mayor’s $869.5 budget, is comparing apples to apples. I don’t appreciate (how) misleading your reporting on our budget has been.”

On Tuesday, Rawlins-Fernandez responded to requests for comment on the mayor’s line-item vetoes but did not respond to follow-up questions about the confusion over the budget comparisons.

David Raatz, supervising legislative attorney for the Office of Council Services, said Tuesday that it was “a staff error that led her down the wrong path,” and that “she no longer believes” that the council’s budget is lower.

Raatz couldn’t confirm the exact number for the council’s all-inclusive budget but said the calculation of $907.2 million “appears generally accurate.” (The Maui News calculated the figures based on the budget bill submitted to the mayor from the council.)

The fiscal year 2020 budget, which runs from July 1 to June 30, 2020, was line-item vetoed by Mayor Michael Victorino on Monday. The dozen line-item vetoes included removing $1 million for Upcountry sewer system upgrades (the county doesn’t have a sewer system Upcountry) and reducing funding for a Kihei-Makena sewer expansion from $7.5 million to the original ask of $2.5 million because the council did not specify how to use the extra funds and the department did not have the capacity to take on the additional money.

Victorino also was seeking details on the calculations the council used so he could make the changes to the budget documents and accounting system.

The mayor said he was “disappointed that more work wasn’t done to keep spending in check.” However, Rawlins-Fernandez said Tuesday that the county’s budget grows every year, and that the difference this year is that “our priorities have shifted, we identified the county’s top critical needs, and then had the courage to find ways to fund them.”

“I believe the real story here is that our population has clearly outgrown our government’s ability to keep up with the obligations to our community,” she said via email. “While I applaud the administration’s ability to admit that they are unable to commit to much more than is already on their plates, I wish they would take advantage of a council that has never before been more willing to instantly tackle these obligations, and fund the solutions so aggressively and proactively. I want them to know that we are in this together.”

She added that many of the county’s woes are related to impacts from the visitor industry, and that the raising of taxes for resorts and hotels would require “that they give back to our community a bit more equitably and help alleviate the ongoing damage that is being caused to our home.”

“If we cannot keep up with the necessary workload to improve the upgrades needed, and money is not the difficulty, there-in lies the conflict, and I am grateful that we were able to identify this serious issue this budget session and look forward to focusing our energy on progress,” she said.

Council members have 10 calendar days, or until June 20, to override the mayor’s vetoes, which would require a super-majority of six votes.