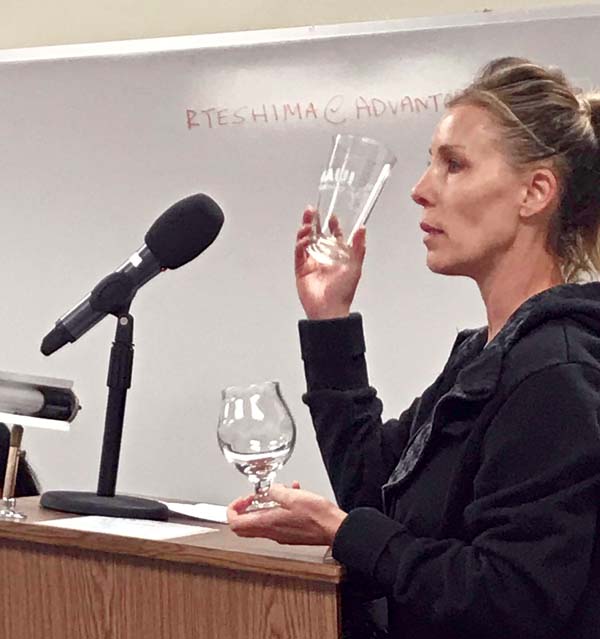 Melanie Oxley, co-founder and chief operating officer of Maui Brewing Co., shows Maui County Liquor Commission members Wednesday the standard pint size that beer is served in at various restaurants and bars. She also is holding a 13-ounce goblet that her company uses to serve beer. Oxley and other craft-brewing industry leaders opposed a rule amendment to define a “standard drink” of beer at 12 ounces, saying beer is served in different ways. The Maui News / MELISSA TANJI photo

WAILUKU– Officials with the growing local craft brewpub industry urged the Maui County Liquor Commission on Wednesday to permit the serving of sample-size craft beers and opposed a rule change defining a “standard drink” of beer at 12 ounces, saying the worldwide industry standard is 16 ounces.

“The beverage industry, it’s not a one all; there are different expectations from consumers,” said Melanie Oxley, co-founder and chief operating officer of Maui Brewing Co. in explaining her opposition to the 12-ounce standard.

As she held up a pint glass to the commission, Oxley said customers come in asking for a “pint” of beer or the standard measure of 16 ounces. Restaurants and bars normally serve their beers in 16-ounce glasses.

“It is so standard that the word ‘pint’ is used,” she said.

Oxley added that different types of beer are served in smaller glasses, including a 13-ounce goblet to serve 12 ounces of beer. Smaller serving sizes are used when the beer contains higher volumes of alcohol.

She was one of several business representatives offering testimony on rule amendments before the commission Wednesday. These rule changes were left over from May’s meeting, in which the commission voted to approve some changes but deferred others. Changes still left to be decided Wednesday were:

• Removing the rule that prevents serving more than two drinks at one time to an individual to allow for the serving of flights, provided the combined drinks do not exceed the volume of a standard drink.

• Allowing restaurants and dispensers to serve liquor for off-premises consumption from 6 a.m. to 11 p.m. and manufacturers and wholesalers to do business at any time.

But after listening to testimony and getting recommendations from the liquor department, the commission by majority vote deferred all of the items until its July meeting.

Commission Chairman Nane Aluli wanted further clarification on the changes from the Department of Liquor Control. He also noted that there are liquor-related bills passed by the Legislature on Gov. David Ige’s desk whose outcomes will be determined by the July meeting.

Commission rules will have to comply with the new state rules.

One of the measures, Senate Bill 772, addresses the sampling or “stacking” of beer. Liquor Control Director Glenn Mukai said in his administrative report that the bill likely will become law without Ige’s signature.

The bill addresses the craft brewing industry and requires rules adopted by the county liquor commissions regarding stacking of beer to be defined on a total volume basis, not by the number of drinks. The bill said some counties (including Maui County) have defined stacking to mean having no more than two standard servings of drinks before a customer at any one time.

Standard serving sizes differ by county and are set by each county liquor department and liquor control commission, the bill said.

Oxley and other craft brew pubs support allowing more than two flights for sampling with 4-ounce glasses in Maui County. She said some sampling customers do not want to drink lots of beer at one sitting but want to sip and enjoy a variety at lower volumes.

Customers have complained about having only two 4-ounce glasses in comparison to a 16-ounce pint of beer. This standard leads to negative online reviews, Oxley said.

While the state law would allow up to 32 ounces of beer served in stacking situations, Oxley said it will “probably never be our goal” to reach that limit. Their sampler “paddle” holds four small glasses at 4 ounces each, which total 16 ounces.

Joe Lorenzen, brewmaster and partner in Waikiki Brewing Co. on Oahu, agreed that sampling sizes of beer should be allowed. He said the company is looking to establish a presence on Maui.

His and other breweries support responsible consumption of alcohol. They conduct training and obey the rules because they do not want to lose their licenses.

Rick Collins, director of the Maui Coalition for Drug-Free Youth, said he understood that beers are not equal in servings but supported the lower 12-ounce standard.