Dumping of cars on Maui on rise; illegal sites cropping up

County trying to deal with issue of disposal cost 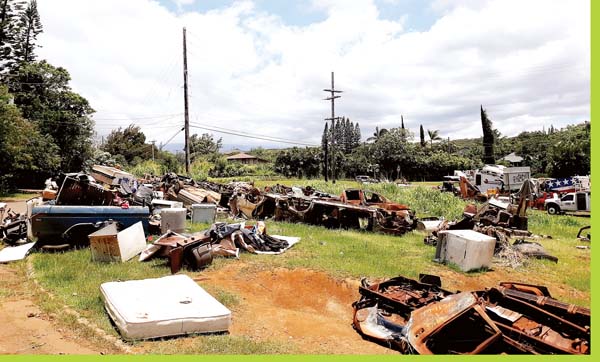 Abandoned junk piles up on a lot in Haiku as more people discretely add to it. The county, coordinating with the state, plans to remove the pile in a couple weeks. The Maui News / DAKOTA GROSSMAN photo

The illegal dumping of cars along Maui’s highways has grown by at least three times in six years, and the county official who handles their removal attributes some of the increase to the cost of disposal.

Tamara Farnsworth, manager of the county Environmental Protection and Sustainability Division, said late last month that “it has become very expensive to dispose of a car at a permanent facility.”

For example, Hammerhead Metals Island Recycling charges a recycling fee of $50 per net ton for an automobile with no fluids or tires. An automobile with fluids and tires costs an additional $165.

(Certain appliances, like refrigerators, coolers, washer and dryers, are taken for free at Hammerhead Metals.)

The price to junk a vehicle varies based on the world metals market, which “has definitely been shifting over the last few years,” according to Farnsworth. Ferrous metals are a globally traded commodity, whose prices can be affected by factors including demand for materials, tariffs and trade disputes. 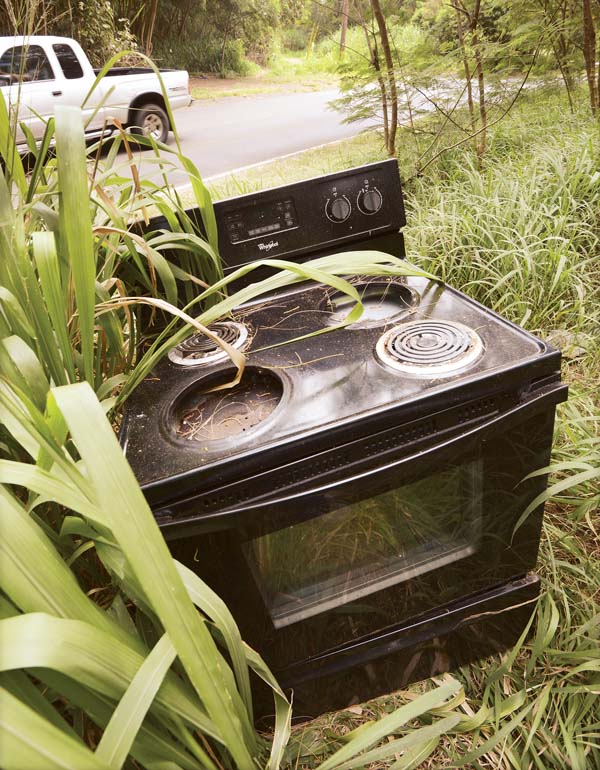 A discarded electric range sits in the brush near the entrance to Waiehu Municipal Golf Course on Friday. The Maui News / MATTHEW THAYER photo

“While metals markets can be one factor affecting the abandoned vehicle issue . . . there are many economic and social factors that may cause someone to abandon their vehicle,” she said.

To combat the problem, the county implemented the Junk Vehicle Disposal Assistance Program on Sept. 4, which allows Maui residents to dispose of one vehicle per year for free. Farnsworth said that the program will remain in effect until it is no longer needed or funding is exhausted. The permanently junked vehicle must be delivered to a permitted scrap metal facility, such as Hammerhead Metals.

Farnsworth said that an exit survey is conducted with everyone who utilizes the disposal credit.

“According to the survey, a full 30 percent of those people had considered abandoning their vehicles, but they chose to use the program instead,” she said. “So we just encourage people to utilize the assistance program. 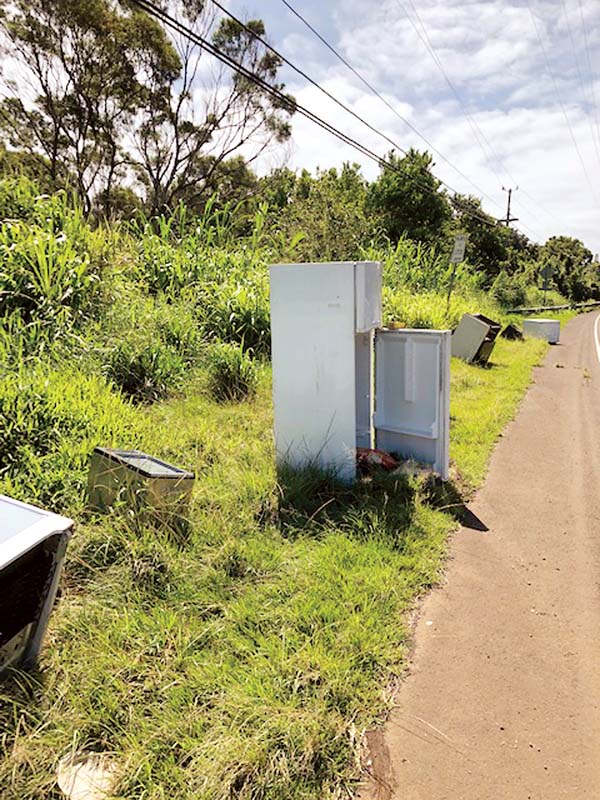 Broken refrigerators and stoves left on the side of Hana Highway are shown in this photo taken in April. Photo courtesy of Leilani Muller

“There is an option to do the right thing, we want people to know that.”

“The county does its best to provide opportunities to do the right thing, and people need to incorporate their own environmental ethics,” she said.

But not everyone does the right thing. There are areas the county labels as “hot spots” for illegal dumping, such as rural parts of Central and South Maui, Farnsworth said.

Recently, there has been a buildup of abandoned vehicles and appliances on the side of Hana Highway and Hahana Road. This is an “independent community effort,” not a county activity, she said.

“We’re not sure if the community dumped more after the (initial) cars were brought up, we’re not aware of the sources,” she said. “Once you start a dumpsite, other folks tend to add to it.”

Cleaning up a makeshift dumpsite takes a lot of time and coordination with other agencies, Farnsworth said.

“While we are thankful to the community for taking the initiative to help, we also need them to understand that it takes time for us to respond to unplanned types of efforts and activity,” she said.

The county is working with the state Department of Transportation to clean up the area, hopefully within the next few weeks, she said.

Haiku resident Leilani Muller noticed several dumpsites in March and is disappointed that people abandon their garbage “all the time” off Hana Highway.

“I try to catch them, but they are sneaky,” Muller said. “People don’t seem to take care of their cars and just dump them when they don’t work.”

Dumping junk in an unpermitted location poses many threats to the ecosystem. Vehicles and appliances contain hazardous materials and toxic fluids that are unhealthy for plants, animals and people, Farnsworth said.

“Sometimes, we find illegal dumping of appliances in gulches, which can find their way into streams and make their way into the ocean,” she said. “There are also cases of people burning their vehicles.”

The vehicles themselves can be a safety hazard because “some vehicles are vandalized, and there could be glass left on the ground or the car is left with sharp edges,” Farnsworth said.

Vehicles abandoned on a public roadway and tagged with an orange abandoned vehicle sticker may be towed away in 24 to 48 hours, Farnsworth said. The vehicle’s owner will be required to pay all charges, which could be as high as $1,000 in fines. Owners also are responsible for the cost of towing, storage and disposal of the vehicle.

Only vehicles and appliances abandoned on public property and tagged by the Maui Police Department can be removed by the county, she said.

“As we are a small island with a limited economy of scale, providing adequate infrastructure in a cost-effective manner is really challenging,” said Gabrielle Schuerger, executive director of nonprofit Malama Maui Nui. “As such, it’s really important that each of us manage our end-of-life resources in a pono manner.

“It’s the community’s collective action that upholds our stewardship culture.”

Malama Maui Nui is funded by grants from the county to address illegal dumping as well as to provide waste and litter reduction education to the community.

Schuerger said that it has to be a joint effort among residents and government and nonprofit officials to reduce the environmental, economic and social impacts of illegal dumping.

“If community members are concerned about these issues, it’s really important that they get involved,” she said. “Whether that be calling on elected officials about funding waste infrastructure, helping a neighbor transport an appliance to the recycling location, volunteering for a community cleanup or donating to organizations that facilitate cleanups.”

To report a suspected abandoned vehicle on a public road or public property, call the MPD’s nonemergency number at 244-6400 and dial 0. The report must include a specific location of the vehicle, make, model, color, how long it’s been at the location, and the license plate number, if possible.

For more information on metals and abandoned vehicles, go to www.mauicounty.gov/834/Metals-and-Abandoned-Vehicles. To learn more about the Malama Maui Nui nonprofit program, go to its website at malamamauinui.org/.