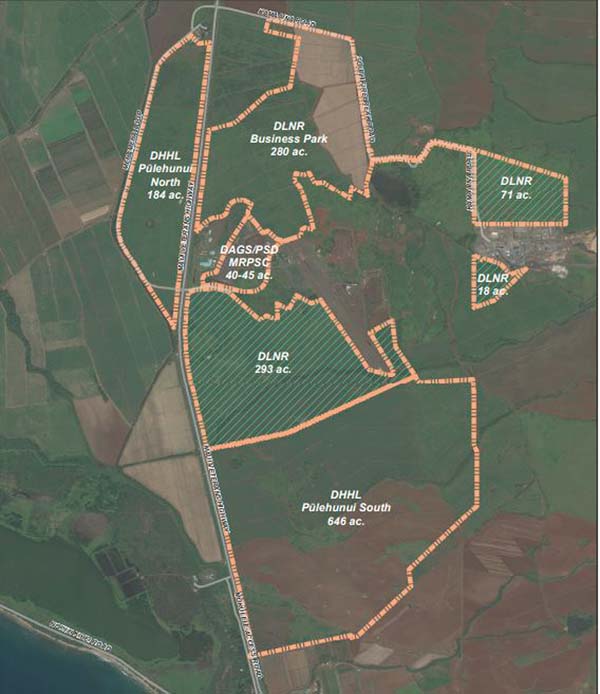 A master plan for water, wastewater and roadways to service state-owned lands in Pulehunui is nearing its final stages.

The state Department of Hawaiian Home Lands is leading the infrastructure planning efforts on behalf of four state agencies that own land or are overseeing projects on a combined 1,500 acres in Central Maui.

In 2014, the four agencies agreed to work collaboratively among their projects, and DHHL was awarded $4 million in capital improvement funds to plan and design the infrastructure for the region.

To date, $17.5 million has been appropriated for wastewater improvements.

DHHL has two projects on vacant former sugar cane lands — one for beneficiary uses like farming and education, and another for commercial uses that would fund those DHHL programs.

It would be located across from the Kealia Pond National Wildlife Refuge.

The 184-acre Pulehunui North project focuses on generating income for DHHL. It would include 80 acres of industrial space; 43.4 acres for roads, easements and open space; 40 acres for a possible cultural center/visitor attraction; 16 acres of commercial space; and 5 acres for a possible hotel. It would be located on the Lahaina side of Maui Veterans Highway, across from the Kahoohanohano Armory.

Meanwhile, DLNR’s 280-acre industrial and business park would allow for light industrial, commercial, government and nonprofit use on 66 lots of various sizes. The park also would include a 20.3-acre site for the proposed Division of Forestry and Wildlife administrative facilities and baseyard. The project aims to generate long-term revenue for the department and would be located on the Haleakala side of Maui Veterans Highway above the armory.

As for the Maui Regional Public Safety Complex, it would take up 40 to 45 acres between the armory and Maui Motorsports Park. The site would include a prison that would start with 608 beds and eventually expand to 843.

However, as of November, applications for a state special use permit and county conditional permit filed in 2012 were withdrawn. If the project were pursued in the future, a new permit application would be submitted. The project’s EIS preparation notice had not been withdrawn as of this month, the DHHL noted.

The Pulehunui North and South projects also are expected to begin construction in the 2020-28 time period, with complete buildout by 2035. For the industrial and business park, infrastructure would be built from 2022-25, while the project aims to be fully leased by 2033 and built by 2038.

According to the master plan, the preferred way of supplying water to the projects would be to connect to the county Department of Water Supply system. That way, the state wouldn’t have to build or operate a new water treatment facility, and the county’s system could more easily handle disruptions, such as power failure. However, there’s also uncertainty over offsite tank storage and new source development requirements. DHHL plans to work with the county before choosing a plan and is still evaluating other alternatives, which include hiring a private company to operate on-site treatment facilities.

The master plan also proposes building a private wastewater system on Pulehunui South lands. Wastewater from the Pulehunui projects would flow through collection sewers to a pump station at Pulehunui North, then travel through a new force main to Pulehunui South. The initial, temporary facility aims to be completed before the other major projects and would be able to handle 90,000 gallons per day, about 15 percent of Pulehunui’s eventual estimated wastewater flow of 618,000 gpd. It would be upgraded to a larger capacity as demand grows and funds become available. R-1 water from the facility could be used for irrigation.

The projects all are located along Maui Veterans Highway, and widening improvements have been proposed at the intersection of the highway with Mehameha Loop and Kamaaina Road as part of the Puunene Heavy Industrial Subdivision.

With traffic on Maui Veterans Highway expected to increase by over 80 percent by the year 2035, the state Department of Transportation has said that the highway may need to be expanded by two travel lanes from Kuihelani Highway to Piilani Highway. However, because those plans are not currently funded nor included in the latest Statewide Transportation Improvement Program, they were not included in the traffic study for the Pulehunui master plan.

With plans for more lanes up in the air, DHHL and DLNR will work with the DOT to address the need for greater capacity on the highway, according to the master plan.

“DHHL will also coordinate with DLNR regarding the proposed new intersection on Maui Veterans Highway that will provide access to both agencies’ lands to ensure the proposed access roads to each property align and are acceptable to DOT,” the plan says.