Hannemann says there is no other industry offering as many jobs 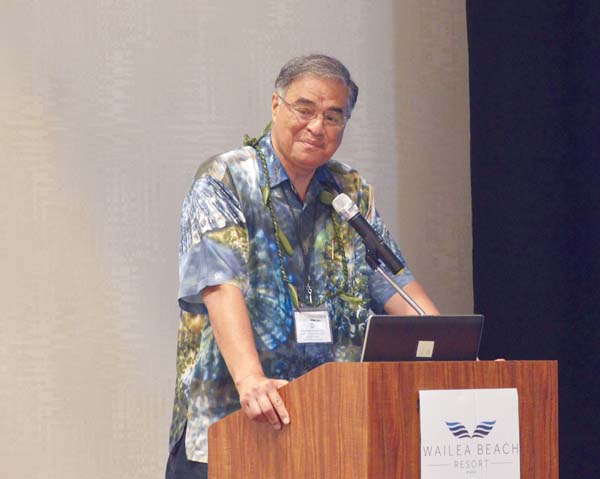 Former Honolulu Mayor Mufi Hannemann told an audience during the 2019 Hawai‘i State Association of Counties annual conference Monday that instead of diversifying the economy away from tourism, diversification should occur in the tourism industry, such as sports, health and environmental tourism. The Maui News / MELISSA TANJI photo

WAILEA — Even though many people say, “let’s diversify beyond tourism,” a visitor industry leader said Monday that “we need to diversify within tourism” because there is currently no alternative that will provide the same number of jobs.

“Tourism is our core competency. It’s what we do best,” said Mufi Hannemann, president and CEO of the Hawai’i Lodging & Tourism Association and former Honolulu mayor. “No other place has the manao that we have in respect to tourism. We do it right. We can’t be shy about it. We need to put it out there unless there (is an) alternative to tourism.”

He said the state and its people should “create the image, the aura that Hawaii is a great place to vacation” but let visitors know that they will learn, invest and participate in the islands.

He pointed to recent tourism diversification initiatives, such as sporting events, that bring benefits to residents, including those on the Neighbor Islands. This includes the Los Angeles Rams-Dallas Cowboys preseason National Football League game at Aloha Stadium in August. As part of the game, there will be a high school football clinic on Oahu to which Neighbor Island teams, including Lahainaluna High, are invited, Hannemann said.

There is also the Hawaii Food & Wine Festival, which has a high school entrepreneurship program, with Neighbor Island students flying to Oahu to participate.

Diversification of tourism could also include a focus on health and the environment.

Hannemann’s comments came Monday morning during his keynote address, titled “Sustainable Tourism: Marketing vs. Managing,” at the 2019 Hawai’i State Association of Counties annual conference, held this year at the Wailea Beach Resort. The conference, which began Sunday and runs through Wednesday, is being headed up by the Maui County Council.

HSAC is a professional organization whose members include the legislative bodies and mayors of each county. Hosting the annual conference rotates among Hawaii’s four counties.

In his talk, Hannemann presented some misconceptions about the industry, which include “tourism doesn’t do enough to give back to the community,” “it’s all about profits,” and “seven straight years of record growth translates to record profits.”

Members of the HLTA provide 40,000 people with good paying jobs in the lodging industry. He said even housekeepers get paid up to $27 an hour, more than the state’s minimum wage of $10.10 per hour.

The tourism industry has put $2.5 million into social services agencies, specifically for homelessness outreach and services, in the last five years.

As for the record years of growth, Hannemann said the industry “had an amazing ride,” but pointed to the softening in visitor spending even as more tourists to come to Hawaii.

In the first four months of this year, visitor spending decreased on Maui by 5.3 percent to $1.72 billion, despite a 3.4 percent growth in visitor arrivals to 977,044.

In explaining the public safety point, Hannemann said that on the heels of a rash of crimes against Japanese tourists, the Japanese Consul General warned that if the City and County of Honolulu did not halt crime against Japanese visitors they would stop coming.

On the natural resources and upgrading attractions front, Hannemann pointed to Hanauma Bay on Oahu, where years ago the Honolulu administration wanted to charge admission and put the money into the general fund.

Hannemann, who was on the City Council at that time, called for the funds raised from fees to go back to the bay. Closures also were implemented to protect the bay and sea life. An education center was built.

And the fee applied only to nonresidents.