Olowalu was first sighting in U.S. of Ramie moth 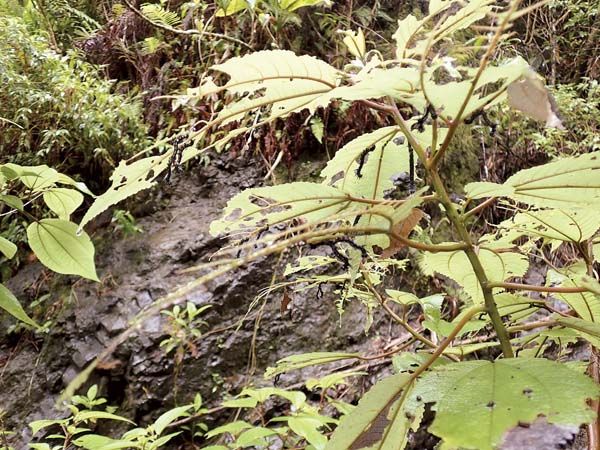 The caterpillar of the Ramie moth ravages a mamaki plant, which also is a food source for the native Kamehameha butterfly. The mamaki is a critical plant in the protection of the watershed. State Department of Land and Natural Resources photo

An introduced caterpillar and moth native to Southeast Asia have been discovered on Maui — the first documented sighting in the U.S. — and are feeding on endemic nettles plants, which are critical for watershed protection, and offering habitat competition for the native Kamehameha butterfly, the state Department of Land and Natural Resources said.

A biologist looking for native snails in October noticed signs of unfamiliar caterpillars feeding on mamaki in Olowalu, the DLNR said Tuesday. They turned out to be the Ramie moth or Arcte coerula.

After identifying the caterpillar and moth and conferring with colleagues, reports filtered in from across the island, including Olinda, Ulupalakua, Waiehu, Iao, Kahakuloa, Makawao and Ukumehame, DLNR said.

The Ramie moth is laying its eggs on several plants in the Urticaceae or nettles family, such as mamaki and ‘akolea. They also are food sources for the Kamehameha caterpillar and are culturally important because of their fiber and medicinal qualities.

“Mamaki and other plants in that family provide habitat for animals and other plants. They are an important species in wet understories, they protect watersheds,” said Keahi Bustamente, a Maui-based Pacific Cooperative Studies Unit invertebrate biologist working with the DLNR Division of Forestry and Wildlife. 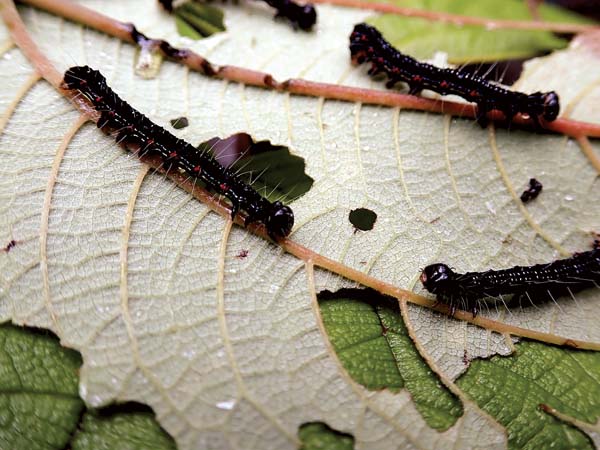 This is a photo of the caterpillar of the Ramie moth, which is native to Southeast Asia. It has been found on Maui. State Department of Land and Natural Resources photo

Many of the 14 species in the mamaki family are endemic to Hawaii and are found only here; some species are critically endangered, he said.

Bustamente said that the Ramie caterpillar was offered different leaves of several species in the Urticaceae family “and it ate all of them.” Residents who grow and manage mamaki and olona in home gardens need to keep an eye out.

How the Ramie moth arrived on Maui is unknown, though based on its life cycles “it’s likely to be human-introduced versus naturally rafting over,” said Bustamente. They could have been transported as eggs on leaves of an imported plant, he said.

He also noted that the first place an invasive insect is seen is not necessarily its point of origin into the state. The location is just the first place it’s seen, in this case Olowalu, he said. Once on the island, the moth can spread with the wind.

While native to Southeast Asia, the Ramie moth has spread to the Philippines, Japan, Australia and New Zealand. It was found for the first time in the U.S. in Olowalu, Bustamente said.

Bustamente indicated that more information is needed to combat the Ramie moth. He noted that there already are native and parasitic wasps in the wild that could be predators. Introducing another agent might be problematic and would require much more research before that could happen.

Everyone is encouraged to report new sightings, he said.

Ramie caterpillars are black and sometimes yellow, with bright orange-red spots and white hairs, DLNR said. They are different than Kamehameha butterfly larvae, which are black when first hatched, and greenish when ready to make a cocoon.

Their behaviors differ too.

“When it’s trying to scare off predators, this thing is fuzzy, colorful, and rears up its head and waves it around, and it spits,” Bustamente said about the Ramie caterpillars. “Kamehameha caterpillars don’t do that.”

The Kamehameha butterfly is one of two endemic butterflies to Hawaii.

For more on the native Kamehameha butterflies, go to cms.ctahr.hawaii.edu/pulelehua/How-to-Identify.