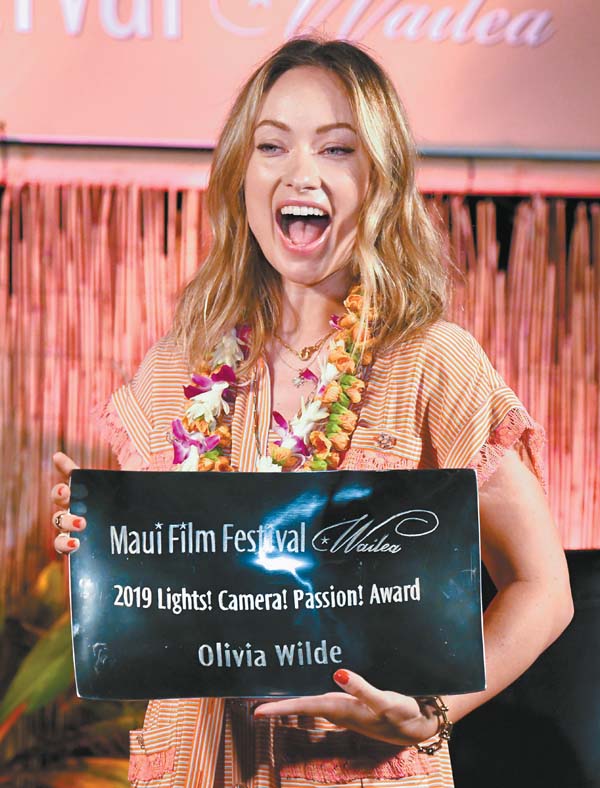 WAILEA — Olivia Wilde’s career is the story of strong women giving her opportunities.

“I have a pattern in my life of women really giving me a chance, and so I’m trying to do that in turn,” Wilde said before the final awards ceremony Sunday evening at the Maui Film Festival. “I call it ‘the daisy chain,’ the idea of just like, reach out, pull someone else with you.”

On Sunday evening, Wilde accepted the festival’s Lights! Camera! Passion! Award, which “honors a director for their heartfelt personal and professional commitment to the triumph of the human spirit in movies that matter.” The honor comes eight years after she received the festival’s Shining Star Award in 2011.

“It’s awesome because my dream for a long time has been to direct,” Wilde said in an interview Sunday night with The Maui News. “I have been an actress for 17 years, I have been a producer, but directing is new for me. . . . To have the chance to come back here and to celebrate this pivot in my career with the Maui Film Festival is so nice because I feel the support over different stages of my career.” 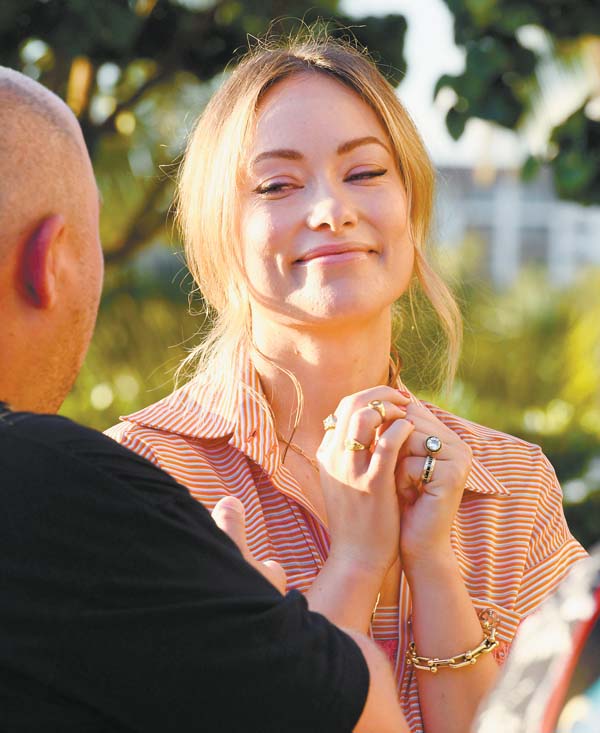 Wilde came to Maui with her two young children. She said leaving fiance Jason Sudeikis at home for some peace and quiet was his Father’s Day present, though Sudeikis planned to join them in a couple of days.

“We’ve been swimming, we’ve been just hanging out,” Wilde said. “This is our favorite place to come as a family. The kids have been coming here since they were tiny babies, and so the chance for them to just frolic and just be free, they don’t get that anywhere else.”

Wilde is fresh off the mid-May release of “Booksmart,” her directorial debut that stars Amy (Kaitlyn Dever) and Molly (Beanie Feldstein) as best friends who, after four years of developing a reputation as A-plus students, are determined to cram in one night of partying before graduation day. Over the course of a rollicking night that includes a bust of a yacht party, an attempted carjacking of a pizza delivery guy and an awkward Lyft ride with their principal (Sudeikis), Amy and Molly discover there’s more to the classmates they judged as hard-partying slackers and mean girls.

The film is quintessentially 2019, featuring teens who are socially conscious but still not above high school high jinks that include graffitiing their gender-neutral bathroom.

“I’m in awe of Gen Z, and I wanted to make a movie that tried to accurately reflect how passionate they are about using their voices and about their individuality, their fluidity,” Wilde said. “They’re so political kind of in everyday life. They incorporate their political identities into their lives and they inspire me. They make me feel optimistic about the future.” 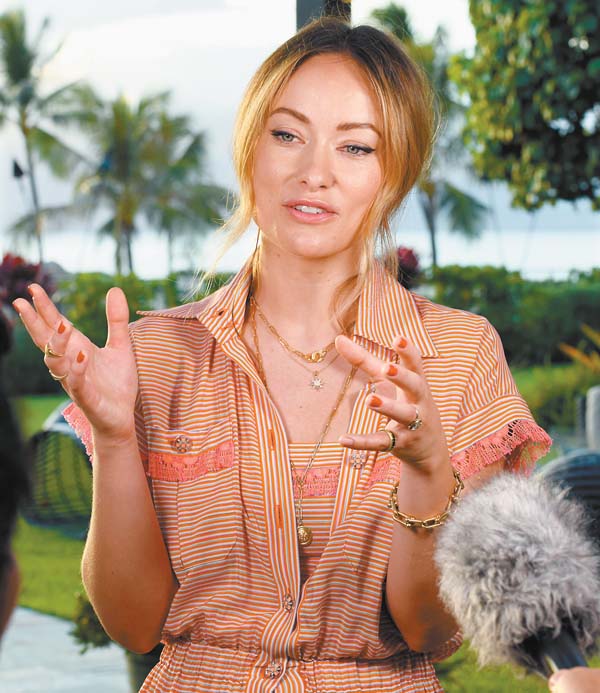 “Booksmart” is currently sitting at a 97 percent “fresh” rating on Rotten Tomatoes and has been acclaimed by critics for its depiction and representation of queer and female characters — leading lady Amy is an out lesbian whose sexuality is a nonissue in the film.

Wilde herself is no stranger to queer representation, playing bisexual internist Dr. Remy “Thirteen” Hadley on the popular medical drama “House.” She left the series in 2011 as she began to focus more on her film career. Wilde has appeared in sci-fi action films like “Tron: Legacy” (2010) and “Cowboys & Aliens” (2011); comedies like “The Change-Up” (2011) and “Drinking Buddies” (2013); and critically acclaimed films like the Golden Globe-nominated racing biopic “Rush” (2013) and the Oscar-winning sci-fi romance drama “Her.” In 2017 she made her Broadway debut in a dramatic adaptation of George Orwell’s novel “1984.”

While “Booksmart” isn’t Wilde’s first time in the director’s chair — she oversaw the short “Free Hugs” in 2011 and a music video for Edward Sharpe and the Magnetic Zeros in 2016 — it was her first feature-length film.

“Directing is my sweet spot, I think,” Wilde said. “And I’m really lucky that I get to do it. There’s very few working women in the directing field. There isn’t a lack of talent or enthusiasm. There’s a lack of opportunity. So I’m really lucky to be a director and I don’t want to stop anytime soon.”

Wilde recalled how she learned under the great casting director Mali Finn, how she was hired on “House” by executive producer Katie Jacobs and how Megan Ellison, president of Annapurna Pictures, “took a risk on me by giving me the chance to direct ‘Booksmart.’ “

“From my earliest kind of job in Hollywood as a casting assistant, I’ve had strong women give me opportunities and allow me to kind of earn my identity within the industry — I think it should be earned,” Wilde said. “And I appreciate all of the women who said, ‘Here’s a chance to prove yourself, and here’s a shot.’ ”

But one of the greatest opportunities was given to her by her parents, longtime journalists who supported her dreams early on. When she said she wanted to be an actress at the age of 3, “they took it seriously,” Wilde recalled. They told her she’d have to go to school and get good grades and be passionate about it.

“And I now realize as a parent myself how significant that is to take your kids seriously, to take their creativity seriously,” Wilde said. “So I try to do that with my kids, who are way more creative than I’ll ever be, but it’s a really lovely thing to have been raised by people who really just encouraged my individuality and my passion and my ambition.”

Wilde said her next projects include acting in another movie — “which is kind of funny because I said I wasn’t going to act anymore for awhile” — as well as writing “another comedic female two-hander” with “Booksmart” writer Katie Silberman and hopefully directing another feature by the end of the year.

When asked for details, Wilde said, “that I can’t tell you, but soon. Hopefully within the next couple months.”

Joe Manganiello talks about his new movie, Bottom of the 9th, before receiving the Maui Film Festival’s Shooting Star Award on Friday.