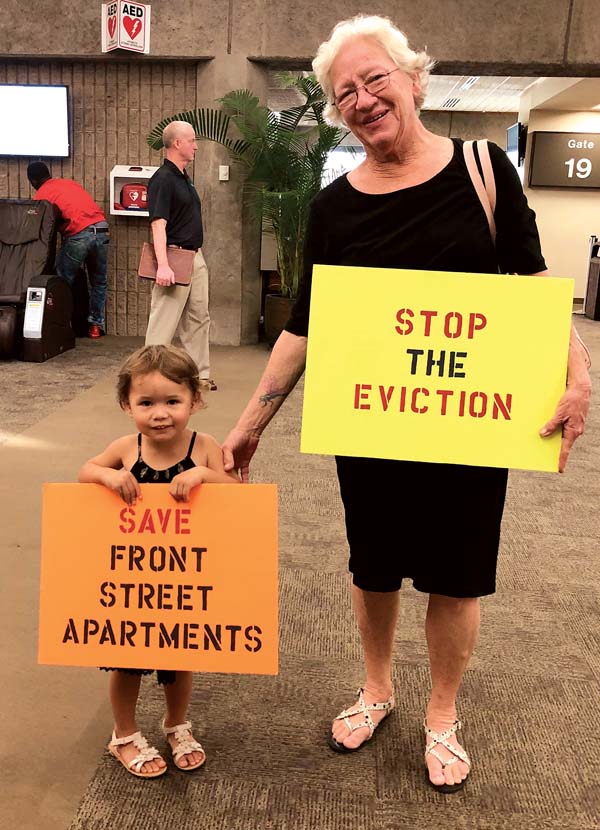 Sharon Serafica was among a number of Front Street Apartments tenants who spoke in 2018 before state lawmakers in Honolulu. The tenants were seeking the support of the state Legislature in their fight to keep their rents at affordable levels. Serafica brought along her great-granddaughter Sage, who lives with her.

Retiree Barbara Henny said she can sleep a little better at night knowing that rents won’t skyrocket at the affordable housing Front Street Apartments where she’s lived for almost a decade.

“It’s been a jittery experience,” she said. “Still, it’s not over until it’s over.”

More than 250 Lahaina tenants cleared a major hurdle in a yearslong battle to keep their homes affordable when Gov. David Ige signed a bill earlier this month that will keep Front Street Apartments rents from surging to market prices.

The law directs the Hawaii Housing Finance and Development Corp. to immediately initiate negotiations with the owners of the Front Street Apartments affordable housing project to acquire the property. It also requires HHFDC to exercise its power of eminent domain if an agreement with the owners cannot be reached within a reasonable time.

House Bill 543 cleared the state Legislature this session and was signed into law as Act 98 on June 7.

Owners of the 142-unit Front Street Apartments, which was built as an affordable housing project in 2001, had said they planned to raise rents to market rates by August. A loophole in federal tax code allowed the owners to do so after they were unable to find a buyer for the development.

Tenants filing a lawsuit against owners Front Street Affordable Housing Partners and HHFDC temporarily prevented rent increases this year with a stay until court proceedings close or until the HHFDC acquires the apartments. This pushed the August deadline into 2020.

Henny, who helps lead the tenant group fighting to secure affordable housing at Front Street Apartments, said proposed increases would have hiked rents about $1,000 a month.

“My Social Security in no way covers that,” Henny said.

The housing provides federal subsidized rents for tenants who are disabled, retired or who work more than one job, according to the tenant group. Many of the apartments are wheelchair accessible and constructed for people with physical challenges. Also, residents rely on its close location to medical and shopping facilities, along with bus access.

With the new law, HHFDC has been planning and taking sequential steps toward the acquisition and working with the owners of the leasehold interest in the Front Street Apartments to come to a solution that provides rent and nondisplacement protections for tenants and is agreeable to all parties, Kent Miyasaki, HHFDC housing information specialist, said Tuesday.

Meanwhile, Miyasaki said HHFDC has executed a purchase and sale agreement with landowner 3900 LLC based on a $14,930,000 appraisal of the fair market value of the leased-fee interest in the Front Street Apartments.

“It is currently undergoing the due diligence process,” he said. “The HHFDC board approved a Dwelling Unit Revolving Fund budget of $15 million for the acquisition of the leased-fee interest on May 9.”

Involving years of bipartisan collaboration, the law affirms the significance of affordable housing on Maui.

“It’s huge,” said West and South Maui Sen. Rosalyn Baker on Tuesday. “We have so many people looking for housing — we don’t want any housing we currently have taken out of the affordable housing. That’s what the current owners are doing and that would put most tenants out of housing. That’s why this is so important.”

Henny said the big push to halt eviction came in 2017 when then-Maui County Council Members Stacy Crivello and Robert Carroll introduced a resolution calling for the state to help the Front Street Apartments tenants. Over the years, Baker and West Maui Rep. Angus McKelvey were successful in advancing legislation that would help the tenants, according to Gary Kubota, volunteer community organizer. Henny also credited Ige and state legislators, Maui County Council and mayors Alan Arakawa and Michael Victorino for helping the effort.

Kubota praised the coalition of groups supporting the Lahaina tenants.

“It’s rare to see the Maui Chamber of Commerce, the ILWU (International Longshore and Warehouse Union) and the AFL-CIO supporting the same cause,” he said. “Kudos to Barbara Henny and the Maui lawmakers and council members for making this happen.”

Kubota is a former Lahaina News editor. Maui News and Honolulu Star-Advertiser reporter and previous leader of Kokua Hawaii, a group that helped fight several evictions on Oahu in the 1970s.

“This represents that the state and the county has taken heed of our plight,” said Henny. “It’s been quite an ambitious pursuit of injustice.”

However, the years of pushing for affordable housing isn’t over, she said.

“There’s still work to be done.”