There still could be issues with information provided, according to administration officials 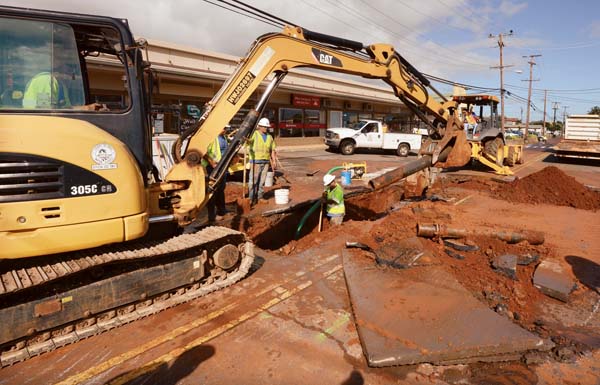 A Maui County crew works on a water main break on Central Avenue in Wailuku last Nov. 13. Water rates are among the fee hikes that go into effect Monday on the first day of the new fiscal year. -- The Maui News / MATTHEW THAYER photo

While the public will not see a disruption in services when the new fiscal year begins Monday, Maui County departments might not be able to spend money or procure services immediately as Mayor Michael Victorino’s administration and the Maui County Council continue to go back and forth over budget details.

For weeks leading up to the new fiscal year, which runs from Monday to June 30, 2020, Victorino and his budget officials have been asking the council for specific information on the $823.5 million budget it approved — the largest budget in county history and $43 million more than the mayor’s proposal. This information that traditionally has been provided by the council to the mayor includes a spreadsheet on specific cuts and additions made to the budget initially proposed by Victorino.

At 4:15 p.m. Friday on the last business day of the current fiscal year, the council sent the administration an internal budget worksheet labeled “summary details,” which the council staff said is similar to a document called “Exhibit 1.”

The current council did not produce an Exhibit 1, a spreadsheet noting where changes were made to the mayor’s budget and is heavily relied upon by the administration for the exact details necessary for implementation of the budget. The document, which is not mandated by law, has been used for at least two decades, county officials said.

There is some confusion about whether an Exhibit 1 document was generated by the council. Council Budget Chairwoman Keani Rawlins-Fernandez has said that Exhibit 1 was not part of this year’s budget process, but that the council did have an internal spreadsheet to track changes made to the mayor’s budget.

Unlike Exhibit 1, which was shared among council members, the internal spreadsheet was not passed out in hard copy form to other councilors because it was continuously being updated as the council made changes, said Rawlins-Fernandez. Council Members Riki Hokama and Yuki Lei Sugimura were critical of the leadership for not providing the information before voting on the budget.

Rawlins-Fernandez has said details that council members and the administration are seeking have been provided in the budget bill.

Rawlins-Fernandez and council Chairwoman Kelly King did not respond to an email seeking comment on Friday.

The administration said it needs the detailed information to input into its financial software, which acts as a safeguard for use of county taxpayer money.

“We have to make sure we are paying for something that was adopted in the budget,” said county Finance Director Scott Teruya on Friday morning.

If the council’s adopted budget is not rolled into the county’s financial system properly, the system will block transactions and send errors whenever a department attempts to pay an invoice or encumber funds, Teruya added.

County Budget Director Michele Yoshimura said late Friday afternoon: “We are going to try our best to roll over the budget this weekend.”

She said about 10 workers, including herself, other appointed staff and some civil service workers — who will accrue overtime unlike appointed staff — will need to cancel their personal weekend plans and tend to the budget with the information provided by the council at the last minute.

“We do our job the best that we can, and we will try to make sure everything is in place,” Yoshimura said. “We work for the people of Maui County and if this is what we have to do, we do what we got to do.”

She added that the scenario could have been preventable had the information been shared shortly after the council’s second reading of the budget in May.

Yoshimura acknowledged Friday that staff members still needed to look over details provided by the council Friday and wasn’t sure if it contained everything needed to implement the budget.

Teruya said in a email late Friday that he has asked his deputy and several key finance accountants to assist him and the budget office in reviewing the council document.

“These employees work tirelessly and never complain as they understand the importance of our fiscal responsibility,” Teruya said.

But Yoshimura and Teruya said prior to the Friday document release that if insufficient details were provided, administration officials would have to make “assumptions.” This could open the door to errors and not implementing the budget as the council had intended.

“If any adjustment was made to a department but did not have any detail, in order to pay an invoice on July 1st, an assumption has to be made with regards to the council’s adjustment. Otherwise, the county will not be able to pay the vendor,” Teruya said.

He added that this opens up the county to increased risk of liability and unfavorable audit findings and could jeopardize the county’s stellar bond rating.

The lack of information from the council could have a significant impact on financial reporting and presentation, he said.

The county’s financial statements are prepared in conformity with the Generally Accepted Accounting Principles. The accounts of the county are organized and operated on the basis of funds, each of which is considered a separate fiscal and accounting entity with a self-balancing set of accounts.

“Government resources are allocated and accounted for in individual funds based upon the purpose for which they are to be spent and the means by which spending activities are controlled,” Teruya said.

Yoshimura said that budget amendments may need to be made in the future and will be brought to the council for its approval. While waiting for the additional budget details from the council, she said she began trying to decipher the details in the council-approved budget, in some cases without much success.

For example, salaries for the liquor department in the next fiscal year budget have gone down more than $100,000, but the council offered no details on why that number went down. She was able to obtain information from the council on the positions that were cut, but total salaries for those positions did not add up to the reduction.

In another example, Yoshimura said the council increased the operations budget for the Office of Economic Development by $200,000.

Victorino mentioned a lack of clarity and information in issuing 12 line-item vetoes to the council budget. The council overrode all but three.

One of the vetoes that was overridden involved $500,000 for a countywide master plan for shoreline retreat. Victorino said that the bill calls for the study to be administered by Council Services instead of a county department that normally undertakes such projects.

Planning Director Michele McLean said she agrees with Victorino that the study is “squarely an administrative function” and that she does not recall Council Services ever contracting for a study of this kind.

The first area to be studied will be Molokai, Rawlins-Fernandez’s residency district, despite critical shoreline management issues in West and South Maui. McLean said that because this is a Council Services project, officials there can scope the study in whatever manner they choose.

County planners have been working on dealing with shoreline issues for years. The department has proposed amendments to the Special Management Area and Shoreline Rules that create “red lines” based on a sea-level rise study done by the University of Hawaii.

Some of the rate and fee hikes county residents will see beginning with the new fiscal year on Monday include:

• Nearly across-the-board increases for property taxes. Homeowners will see a bump from $2.85 to $2.90 per $1,000 of net taxable assessed value.