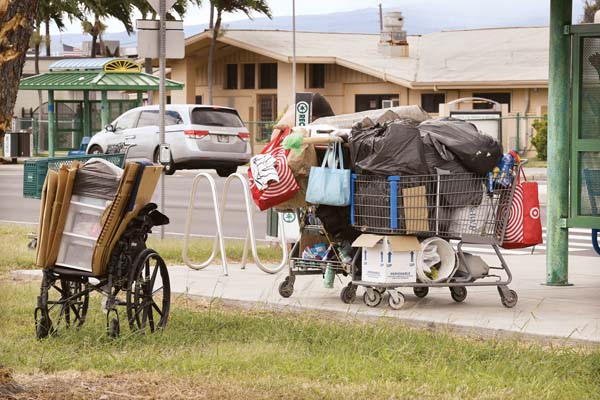 Shopping carts filled with sleeping gear and other belongings are parked next to a Kamehameha Avenue bus stop Friday morning in Kahului. The police started a pilot program in Kahului on May 1 that focuses on diverting homeless people from jail into voluntary treatment.

Launched May 1, the program deploys trained police officers, along with mental health and social workers, into vulnerable Kahului communities with the aim of diverting low-level offenders into voluntary treatment and services instead of jail.

LEAD, or Law Enforcement Assisted Diversion, is modeled after the Seattle Police Department’s successful program, developed in 2011, that eventually spread to 33 states.

“We try to coach them along and say, ‘You can do this; let’s try this,’ ” said Maui police Sgt. Jan Pontanilla, who is spearheading the local program. “We are not forcing them to participate, but it’s something to help them go through the process. Maybe they need medication, maybe they need insurance . . . we are here to help them along.”

Pontanilla explained at a Police Commission meeting May 22 that the diversion program works to build trust with homeless and mentally ill individuals who are often skeptical about assistance. 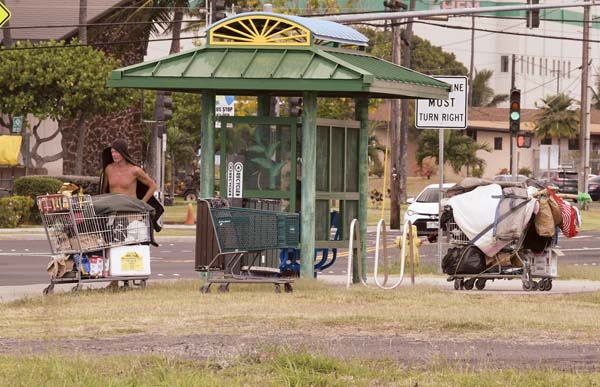 Shopping carts filled with sleeping gear and other belongings are parked next to a Kamehameha Avenue bus stop Friday morning in Kahului. The police started a pilot program in Kahului on May 1 that focuses on diverting homeless people from jail into voluntary treatment.

Pontanilla, along with a mental health partner, heads out weekly for diversion program activities, which include calls for service, intended response and coordinated outreach.

Intended response involves the officer identifying, based on MPD tips, homeless individuals who have had multiple contacts with police. The officer then reaches out to establish a relationship and offer services.

If it’s a coordinated outreach, “the hui,” or group of partners, including Mental Health Kokua, Aloha House and Ka Hale A Ke Ola, plan a joint intervention.

So far, the diversion program is working with 12 people in the Central Maui area. One person got a bed at Mental Health Kokua, she said.

“What we’re trying to do with the CORE program is to stop that cycle of arrest and rearrest by providing them services instead,” said Maui police intelligence research analyst Merry Greer Prince.

The pilot program will focus on Kahului and last one year, but there are funding hurdles. The federal government has awarded the county $625,000 to partially fund five CORE police positions, but the positions were not approved in the last two county budget cycles. The CORE jobs are in the current mayoral and County Council budgets for the fiscal year that begins July 1, but if they get cut, the federal grant expires this year and can’t be tapped, Prince said. Also, community partners have funding for the services they provide.

“This year was our final opportunity to present it one more time,” police Chief Tivoli Faaumu said at the commission meeting. “If they deny to accept our funding, then we have to return it back to federal government.”

Kahului was chosen as the starting point for the diversion program because the majority of homeless incidents and arrests are in Central Maui, police said. The pilot program will assess what works and hopefully spread throughout the island and the county.

Prince discussed national statistics, which show that a ratio of 1 in 5 people suffers from mental illness and 2 of 3 homeless people across the U.S. deal with some kind of mental illness or substance misuse. Due to few resources, the largest providers of mental health services are prisons and jails.

“They have more mentally ill persons locked up than they do facilities that can provide care,” Prince said.

At Maui Community Correctional Center, 400 people on average are in custody, according to Prince. Of that population, 20 percent has “some kind of mental illness,” she said. “There is actually more than that; that’s just what they diagnose.”

“Half of the people that we hold in our facility downstairs are probably suffering from some type of mental illness,” Prince added.

With funding and collaboration, Maui police said, they hope the program extends beyond its pilot phase.

“What we would like to do is also work with the courts, eventually have a community court, a homeless court. And even after arrest, we could still divert through that court to services,” Prince said. “We want to develop it and make it bigger. Right now, we only have Jan (Pontanilla).”

At the end of the meeting, county Prosecutor Don Guzman said he backs the new LEAD program and the much-needed resources that CORE offers.

“This is just another step in the right direction,” Guzman said. “I’ve committed to the chief as well as the commission that the prosecutor’s office will support this program and do whatever we can to complement it.”