Effort to halt erosion, block access to some wrongdoers backfires 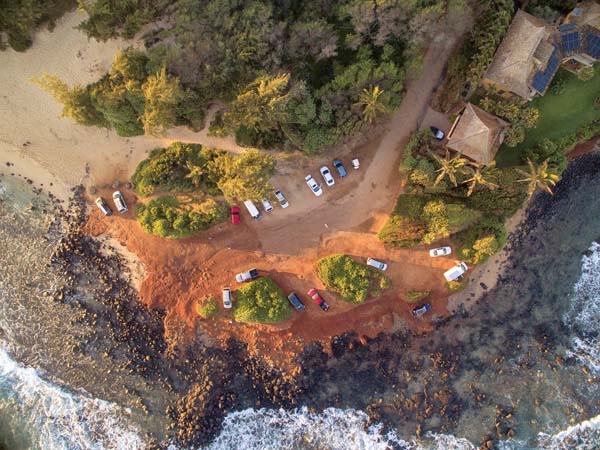 The rich, red clay of Baby Beach parking lot is the foundation for recent controversy, including unpermitted gravel and boulder installations, along with erosion, public safety and camping concerns. The popular beach, located at the western end of Baldwin Beach Park, is not included in Baldwin’s master plan, so some residents recently started a group to address concerns about the spot. -- Photo courtesy of HUGH STARR

SPRECKELSVILLE — Usually placid for local and visiting families, Baby Beach along the tip of Baldwin Beach on Maui’s north shore has been churning in controversy.

In what some called an effort to mitigate erosion and improve public safety, an area resident recently installed nine boulders and gravel at the parking lot, known for its rich red clay, that juts into the Pacific Ocean. The problem, though, is that the unpermitted shoreline actions are illegal and carry hefty fines.

“I think it’s great that a community group wants to take some sort of quote-unquote ownership to prevent further degradation of land,” said Michele McLean, county planning director. “But all of that has to be done lawfully, with the landowner’s permission and with proper permitting.”

“Even if it is compacted to turn to cement, putting in aggregate, a hardened and impervious surface, which contributes to runoff, is not advisable so close to the ocean,” she said. 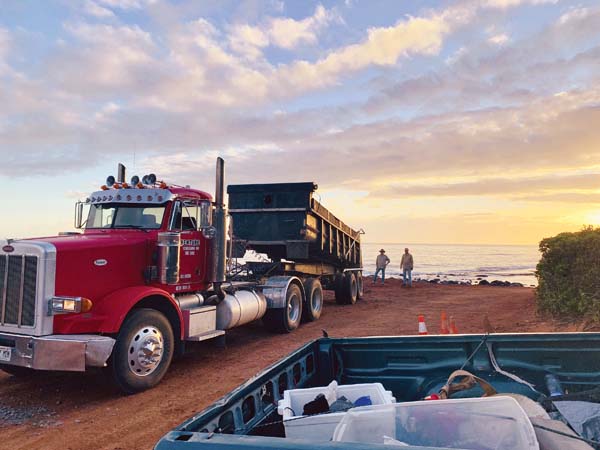 Unpermitted gravel to fill a Baby Beach parking lot depression netted steep county fines for the parking lot landowner, a community group facilitator and a nearby resident. The gravel, along with nine unpermitted boulders, were removed Wednesday but some from the community say that bigger problems for the popular family beach remain. -- J. CHONG photo

The parking lot of Baby Beach, also known as Wawau Point, is the westernmost end of a nearly 30-acre Alexander & Baldwin Properties Hawaii LLC-owned parcel along the coast, according to county property tax records. Because the lot is within federal, state and county protected shoreline areas, the private property still requires special permitting from the county for any alterations.

Landowner A&B Hugh Starr, broker and ag land consultant who’s acting as facilitator for a new group of residents concerned about Wawau Point; and Roger Thorson, homeowner closest to the parking lot, according to county records, were cited Tuesday by the countyfor two May 21 violations. The special management area and shoreline violations each carried an initial civil fine of $60,000 and a fine of $1,200 for each day after Tuesday that the boulders and gravel were not removed.

State law gives 30 days from notice date for appeal. Starr said Friday the parties are undecided on whether to appeal.

Removal work, which required obtaining county permits, lasted a few hours Wednesday and met standards during inspection Thursday, according to Conklin Wright, county zoning inspector who intervened during the gravel installation May 21 after a concerned resident reported it.

Starr said the new group casually discussed how boulders would prevent parking along vulnerable edges of Wawau Point and how gravel could fill a parking lot depression that holds water in the winter. He acknowledged that moving forward without proper permitting was wrong. 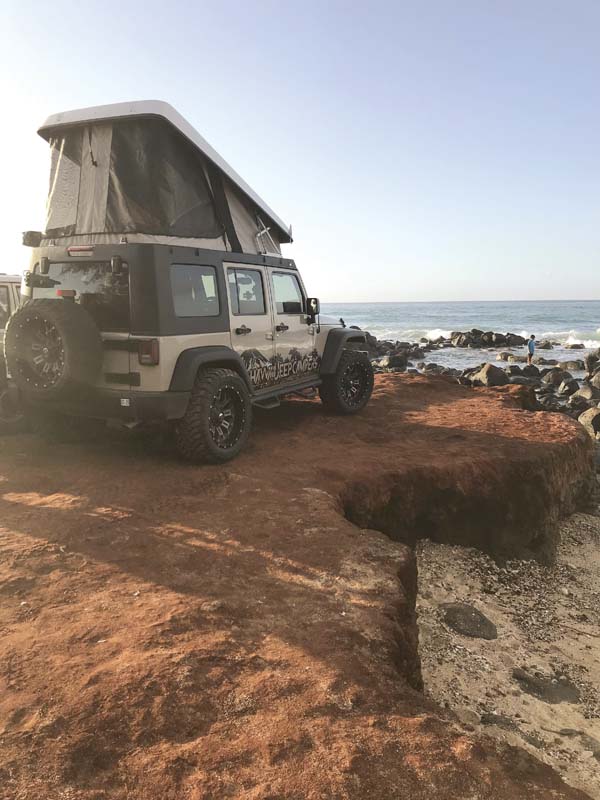 Arrivals of Jeeps and other recreational vehicles encourage unpermitted camping at Wawau Point, also known as Baby Beach, on Maui’s north shore, according to some residents. High volume of overnight visitors, along with erosion and public safety issues, plague the popular family beach. -- Photo courtesy of HUGH STARR

“One individual got a little ahead of himself . . . that is why we are talking,” he said. “There was a violation, within a week, we had an approved permit issued and two days after it was issued, (gravel and boulders) were removed.

“All this has gone away, except for the fines and the existing problems.”

Starr said erosion is just the tip of Wawau Point’s woes, which include nighttime criminal activity, illegal camping with defecation in the bushes, homeless encampments and lack of signage for police enforcement.

“We’re all really freaked out about what’s going on,” Starr said.

During the day, the private parking lot opens to one of the more popular beach spots for young children and families because a long reef calms breaking waves and creates an inshore pool. At night, the lot turns into something far from peaceful, said Paia resident Patrick Borge Jr., who frequents the area to fish with his kids. 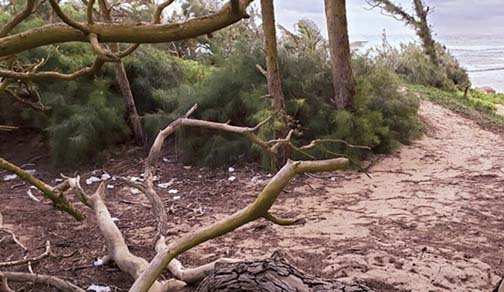 Within the last year, he said, the lot has been overrun with nonfishing campers who drive vans, Jeeps with roof attachments and even a minihouse on a trailer. People defecate in nearby bushes and toilet paper litters one area. “It’s not clean for the kids,” said Borge Jr., who is not connected to the group of residents. “Can you imagine they get sick?”

“The cops are here every night,” he said.

Borge added that installing a gate, so long as fishers are allowed access, may be a solution. He said erosion problems will continue no matter what is done because it’s happening throughout Spreckelsville.

Residents and surfers worried about Baby Beach showed up to a Baldwin Beach Park Master Plan meeting in March and learned that the area is beyond plan borders, Starr said. They then started a loose collective in April called Wawau Point Group that aimed to properly and legally address concerns, he said. So far, the group’s biggest priorities are shoreline protection and restoration, Wawau Point public safety and signage, community engagement and involving government leaders.

Starr, who helped gather a mid-April site meeting with police and county staff, said the gravel and boulder incident is an unfortunate beginning to an otherwise positive group.

Nishiki said there will be much discussion about the “use and abuse” of the area, which is well-loved by the entire community. Among her concerns with the parking lot incident is the lack of greater community involvement.

“I think part of the problem is that wider community outreach was not done before any changes were made to such a beloved and well-used place like Wawau Point, Baby Beach,” she said.

“These kinds of actions demonstrate a lack of respect and hurt the host culture and their sense of place in our exploited island home,” she said. “The best way to make amends is to accept responsibility, pay the fine in full, and move forward, with our community who love this special area, and do what’s in the best interest of Wawau Point.”

Starr, who lives in Makawao and swims at Baby Beach regularly, said the intent of the Wawau Point Group is to gather “interested, constructive, collaborative, flexible community members” from any part of the island.

“We can’t be successful without bringing in our community,” he said. “That is still our intent. This is a work in progress as we speak.”

A&B spokesman Darren Pai said that his company strives to comply with government requirements and that the boulder and gravel actions were taken “without the company’s consent or knowledge.”

“While we are disappointed that unpermitted activity was undertaken on our lands without our consent or knowledge, we believe it was well-intended,” Pai said Friday. “We very much appreciate the swift cooperation of the responsible parties for their assistance in helping to secure the proper permits to quickly rectify the situation to remove the boulders and gravel.

“In the future, we look forward to improved communications and transparency with the responsible parties, users and community.”

Pai added that A&B also would like to be able to continue to provide public access to this area.

McLean said A&B must allow beach access but can greatly restrict the access it currently provides through its private parking lot.