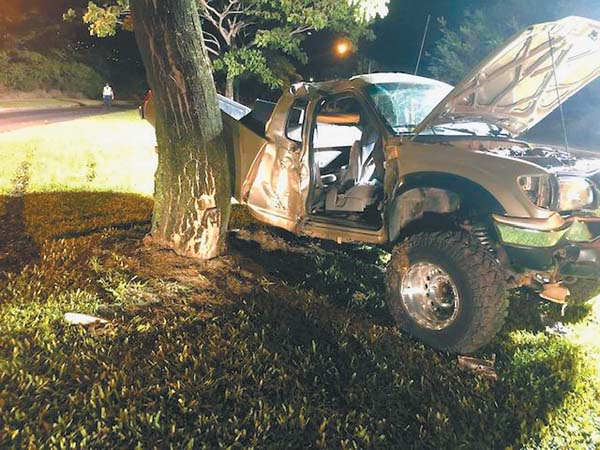 Police said preliminary investigation showed speed is a factor in the crash, which occurred at 2:05 a.m. southeast of Kuikahi Drive.

The 2003 Toyota Tacoma pickup truck was traveling southeast on Maui Lani Parkway when the driver lost control and hit the tree in the center median, police said.

An 18-year-old Kahului woman was driving the truck with three girls, ranging in age from 14 to 16, as passengers, police said.

A 14-year-old girl and a 16-year-old girl, who were both rear seat passengers, suffered life-threatening injuries, police said. Both were transported to Maui Memorial Medical Center in critical condition.

The driver and a 15-year-old girl, who was the front seat passenger, weren’t injured, police said.

The driver was arrested for two counts of first-degree negligent injury and driving without a valid license. She was later released pending further investigation, which police said is common in these types of serious crashes.

Police Vehicle Homicide investigators will reconstruct the crash to determine the speed involved, as well as whether drug or alcohol use contributed to the crash, police said. Once the investigation is completed, the case will be sent to the prosecutor’s office, police said.