Visitor arrivals up, spending down in April 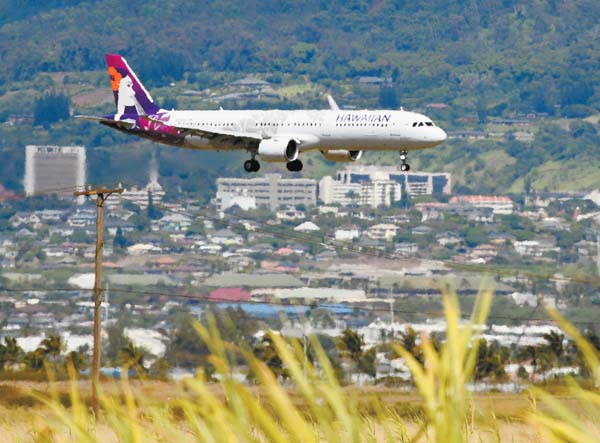 A Hawaiian Airlines jet makes its final approach to Kahului Airport last month. According to the latest data released Thursday by the Hawaii Tourism Authority, visitor arrivals to Maui increased in April, as compared to the same time last year, but average visitor spending per day and per trip overall declined. The Maui News / MATTHEW THAYER photo

Visitors to Maui in April logged more days on-island as compared to a year ago, but they were spending less money per day and overall, according to data released Thursday by the Hawaii Tourism Authority.

In April, Maui saw 249,076 visitor arrivals by air, the second highest in the state and an increase of 5.2 percent over the same time last year. That bumped the average daily census — the number of visitors on-island each day — to 63,159 in April, a 3.5 percent increase over the previous year. While the average length of stay dropped slightly, the total number of visitor days grew by 3.5 percent.

Of all the islands, visitors tended to stay the longest on Maui, averaging a stay of 7.61 days in April.

But the increase in arrivals did not bring an influx of cash; visitors to Maui in April spent $394.4 million, or 4.6 percent less than the same time last year. They averaged $208 per person per day, a 7.8 percent decrease from April 2018, while spending an average of $1,583.50 per person per trip. The numbers were the second highest in the state.

In fact, through the first four months, visitor spending decreased on Maui by 5.3 percent to $1.72 billion, despite a 3.4 percent growth in visitor arrivals to 977,044.

Meanwhile, the opposite held true for Lanai. While visitor arrivals by air fell by 17.5 percent in April to 5,387 — the second lowest in the state — total spending climbed 23.2 percent to $8.7 million, and per day spending per person rose 41.7 percent to $474.30. The average person spent $1,607.80 per trip. Both per day and per trip spending on Lanai were the highest in the state.

Of all the islands, visitors spent the shortest amount of time on Lanai, averaging a stay of 3.39 days in April. Total visitor days on Lanai decreased 13 percent to 18,263.

Molokai also saw its total visitor arrivals by air tumble by 24 percent to 4,430, the lowest in the state. Visitors spent a total of $3.3 million on Molokai in April, a decrease of 23.6 percent, while spending per person per day fell 22.7 percent to $174.80.

Visitors to Molokai tended to stay an average of 4.3 days, a full day more than at the same time last year. They shelled out an average of $751.30 per person per trip.

Total visitor days went up by 2.7 percent, but the average length of stay went down 2.9 percent to 8.34 days.

The data for Maui County and Hawaii as a whole echoes predictions of economists with the University of Hawaii Economic Research Organization, who predicted Maui’s record-breaking economy to cool this year as visitor spending went down.

“In real dollars, visitor spending has been falling since the second quarter of last year,” he said during a Maui Chamber of Commerce luncheon on May 2. “And that hasn’t happened before. . . . You tend to see this at peaks where arrivals continue to go up at a slower rate and spending goes down. And our forecast is for some recovery but actually a down year for real spending.”