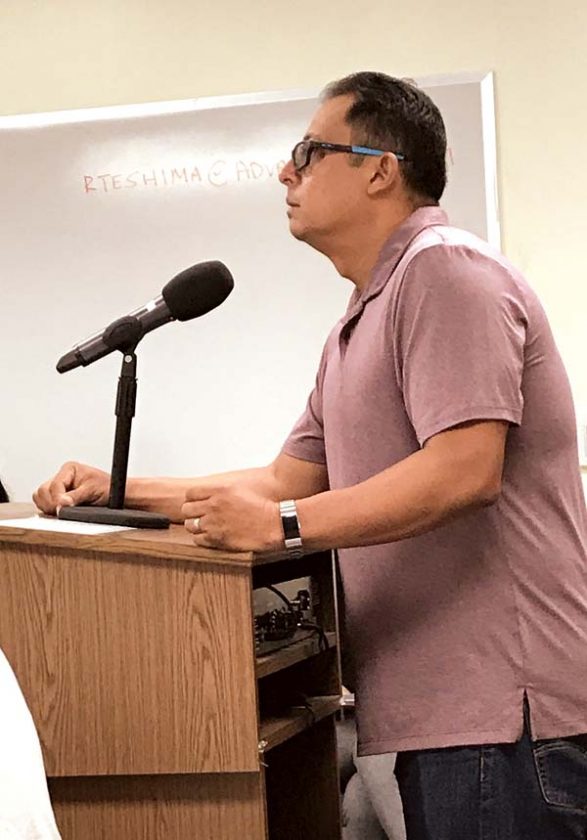 Ericlee Correa, who is a victim of a drunken driving crash, testifies before the Maui County Liquor Commission on Wednesday. He wanted to explain to commissioners the health and safety implications of adopting definitions for items, such as “standard drink” sizes. The Maui News / MELISSA TANJI photo

The two amendments were part of a package of changes passed by the commission, which has been discussing the changes since May. Some of the delays were the result of changes passed by the state Legislature but were awaiting a signature or veto from Gov. David Ige, who had until Tuesday to make a decision. This included a measure, which became law, that called for defining stacking of beer by total volume and not by number of drinks.

Some changes were made to make county rules to align with state laws already in effect. Changes approved Wednesday included:

• Defining drinks, hosted bars and no-host bars. The commission removed the definition for “standard drink,” which it previously proposed as 5 ounces of wine, 12 ounces of beer or 1.5 ounces of distilled spirits in a container. Those in the brewpub industry said Wednesday and at a June meeting that 16 ounces is standard industry size, although servings could also be smaller. Not having a definition for standard drinks allows businesses to serve according to the industry standard, said First Deputy Corporation Counsel Ed Kushi Jr. outside the meeting.

• Allowing restaurants and dispensers to serve liquor for off-premises consumption from 6 a.m. to 11 p.m. (with amount of alcohol to be sold governed by state law) and manufacturers and wholesalers to do business at any time.

• Removing the rule that prevents serving more than two drinks at one time, although that provision still applies to distilled spirits. However, distilled spirits may be served in containers up to 1 quart for special occasions after obtaining a special permit from the director. Beer or wine may be served in a container not to exceed 1 quart or served to a customer in “flights” not to exceed a total of 32 ounces at any one time.

Testifier Ericlee Correa, who said he and his family were hit head-on by a drunken driver, told commissioners to consider their testimony and not only the liquor industry’s when it comes to defining a standard drink.

“You are putting more alcohol on the road. These people don’t ride horses, they drive cars,” he said.

Ride-sharing opportunities and taxis exist but people who are impaired do not make good decisions. “You have the key, you going drive,” he said.

Correa is a retired Maui police officer who worked in the traffic division on its DUI Task Force. He said his wife nearly died from her injuries with her intestines ripped open; their 3-year-old son suffered a broken neck. Correa said he was so badly injured he couldn’t help his family after the wreck.

As a police officer, he recalled going to homes to inform families that their loved one had died in a traffic crash.

“I wish I could record the screams for you guys,” he said.

Correa, who is a volunteer with Mothers Against Drunk Driving, said he knows that businesses provide revenue to the economy, but added: “Who really pays the price in our community?”

Members of the Maui Nui Youth Council and the Maui Coalition for Drug-Free Youth advocated for serving only one alcoholic drink at a time per person.

Ashlee Chapman of Maui Coalition for Drug-Free Youth said that if two drinks are allowed and put in front of a customer, that person is likely to drink them both because he or she paid for them.

Allowed only one drink at a time “slows everything down,” Chapman told commissioners. “We are just asking for speed limits to slow down drinking.”

Garrett Marrero, co-founder and CEO of Maui Brewing Co., said he is torn about the issue and does believe “responsible consumption is important.” But he then questioned what would happen if a person had 1 ounce of beer left in a mug and then a full beer was brought to the table. That would be a violation of the one-drink-at-a-time rule.

Marrero also questioned what would happen if someone had a beer, then saw a shot of liquor and wanted to try it. He asked if the establishment would be responsible for stopping that person from taking the drink.

The one-drink-at-a-time approach also could lead to negative social media reviews because customers may have to wait longer for a second drink, especially if a bartender already was busy, he said.

Commissioner Alberta de Jetley said that waiting five minutes for a drink would be OK for her. Marrero said that some customers may get upset, though, and may not think like her.