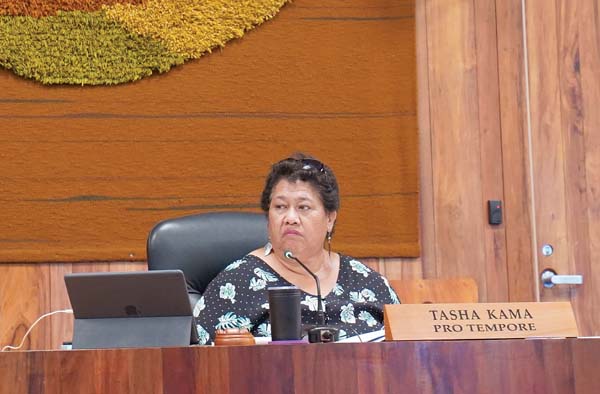 Affordable Housing Committee Chairwoman Tasha Kama listens Wednesday as members debate a pair of workforce-and-market rate housing projects proposed for Launiupoko. Kama supported the plans, but the committee opposed the projects, which will now head to the full council for a final vote. The Maui News / KEHAULANI CERIZO photos

The committee voted 4-3 to recommend disapproving the projects and send them to the full council, which must also vote on the applications that had proposed a combined 96 workforce and 61 market-rate homes in West Maui. Council Members Shane Sinenci, Mike Molina, Keani Rawlins-Fernandez and Riki Hokama voted against the projects; Alice Lee, Yuki Lei Sugimura and committee Chairwoman Tasha Kama voted in support.

“While we did not allow this to go through, the developer can go ahead and sell their ag lots to whomever they want,” Kama announced after the vote. “Our people will never get the view of that mountaintop, which I would’ve liked.”

In recent weeks, scores of testifiers opposed the pair of projects, voicing water, traffic and fire concerns. Meanwhile, those in support said affordable housing is critical on the west side, and traffic could be lessened if workers don’t have to commute as far.

Council members against the projects echoed similar worries Wednesday and emphasized that they want affordable housing, but not like this. 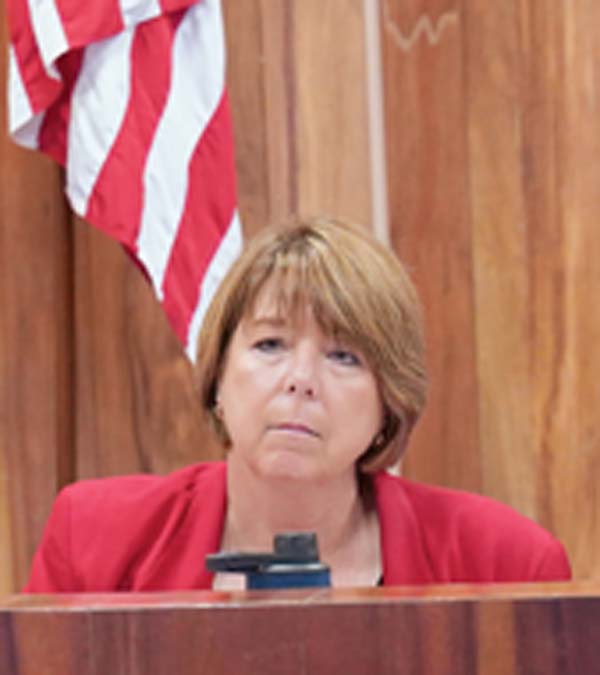 Linda Munsell, deputy director of the county Department of Housing & Human Concerns, listens to a question from Council Member Yuki Lei Sugimura during the Maui County Council’s Affordable Housing Committee meeting Wednesday on a pair of housing projects proposed for Launiupoko. The department said it supports the project; however, the panel opposed it in a 4-3 vote later in the day.

Citing various “red flags” such as water limitations, Molina said he would’ve liked the projects to undergo more thorough vetting, as opposed to fast-tracking the plans. The fast-track process gives the council 45 days from the time the project is submitted to make a decision, otherwise the project is automatically approved.

“Our backs are against the wall with the clock ticking,” he said.

Sinenci, who had concerns about the location’s fire risks and access challenges, also mentioned the constraints of fast-track proposals.

“If it’s a good project, great,” he said. “It works against the project if there are concerns about the project.”

Rawlins-Fernandez said her opposing vote was about smart growth and not just building “sprawl.”

In voting for the projects, Lee said the lack of affordable homes built in the last decade is a concern.

“This project is not perfect, but neither is any other project,” she said. “People want affordable housing until it’s on their street or neighborhood. I would hope people would be more welcoming and show aloha.”

“Some of them came before us . . . with a not-in-my-backyard (mentality),” she said. “At some point our community has welcomed them or us . . . It’s with those same open arms that I wish we would let everyone have a roof over their heads and have that same opportunity.”

However, fewer than 400 units have been completed or are currently under construction since 2015, an average of only 100 units per year. Of the 400 units, only 245 are workforce, or affordable. Between now and 2025, more than 1,500 new units will be needed for West Maui residents, she said, adding that some are in the planning stages.

“We currently estimate that because of various barriers, similar to the barriers faced by these two projects, only another (300) or 400 units will be built in the next six years,” Munsell said. “Maybe half of those will be workforce or affordable units.”

Kipa Centennial, of which Martin is managing partner, proposed Polanui Gardens, which would provide 50 affordable single-family lots with a minimum 10,000 square feet, for residents earning from 80 percent ($67,040) to 140 percent ($117,320) of the area median income. The 48.9-acre development also calls for a 4.5-acre community park, a 1-acre community garden and 16 market-priced agricultural lots with a minimum 1-acre lot size. A 9.6-acre agricultural use easement would provide a farming area and buffer along the Lahaina bypass.

Meanwhile, Hope Builders, which Martin owns, proposed Makila Rural-East, which would offer 46 affordable single-family lots, also with a minimum 10,000-square-foot lot size and also for residents earning 80 to 140 percent of area median income. The 97.6-acre development also would include four live/work units and a neighborhood store on 20,000 square feet of land, a 2-acre community park and 45 market-priced agricultural lots with a minimum 1-acre lot size.

Kipa Centennial and Hope Builders also requested district boundary amendments from agricultural to urban for the workforce housing lots. The committee voted to recommend filing the amendment requests, which would be moot if the council disapproves both projects.

Although some questioned Martin’s credibility during the meeting, Sugimura offered support, saying she’s gotten to know him over the years.

“I just want members to know that when he speaks about providing homes for working families, he gets tears in his eyes just talking about the process when their names get pulled and they get to live there,” she said. “It’s with this heart that he wants to do this affordable project. He could build more megamansions where he doesn’t have to get approval. That’s where we are pushing developers if we don’t support workforce housing.”