Mahi Pono lands suffer the bulk of damage with about 5,000 acres burned 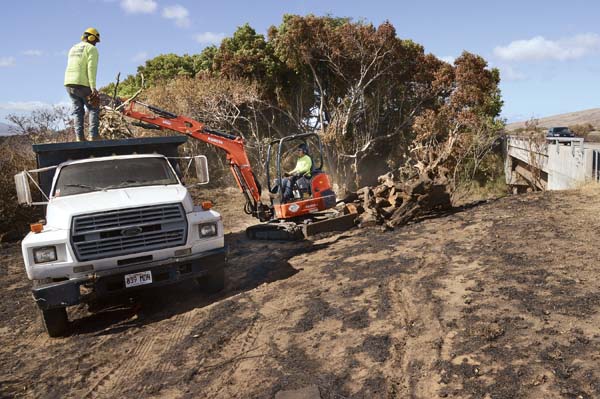 “Currently, our field crew estimates that approximately 5,000 acres of Mahi Pono’s land has been affected by the fire,” Shan Tsutsui, senior vice president of operations at Mahi Pono, said via email. “The parcels affected were south of Waiko Road down towards Maalaea with additional parcels to the east of Pulehunui also being impacted.”

“There were some irrigation parts that melted and a few electrical infrastructure poles and drip stations that burned up. However, there was no damage to any tractors or vehicles,” Tsutsui added.

Mahi Pono is targeting the end of this month or early August to begin planting its first crops. The company purchased 41,000 acres of former sugar cane lands from Alexander & Baldwin in December. 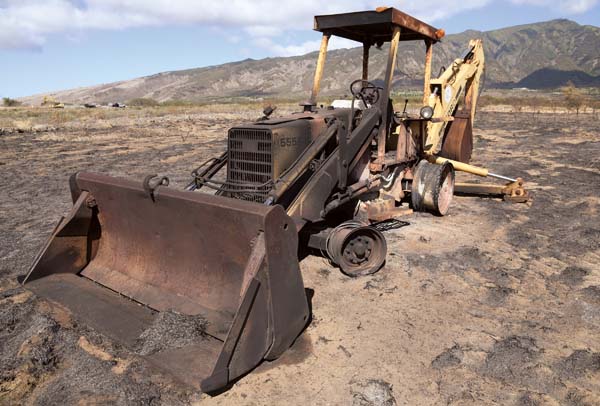 A fire-damaged County of Maui backhoe rests in a burned-out Waikapu lot along Kuihelani Highway on Tuesday morning.

“We are looking to accelerate the irrigation schedule for the parcels affected by the fire. The plan would be to grow additional forage crops for cattle feed,” Tsutsui added.

As for the cause of the fire, Yatsushiro said it is still under investigation and could not make any confirmations or comment further. He added that police are also involved.

Police did not have information about the possible cause of the fire on Tuesday afternoon.

The other wildfire that scorched around 200 acres in Puunene on Friday has been classified as arson and is not related to the Thursday wildfire. It was in the vicinity of the new Safeway and Lowe’s in the Maui Business Park and triggered evacuations of nearby businesses. It did not damage Mahi Pono land. 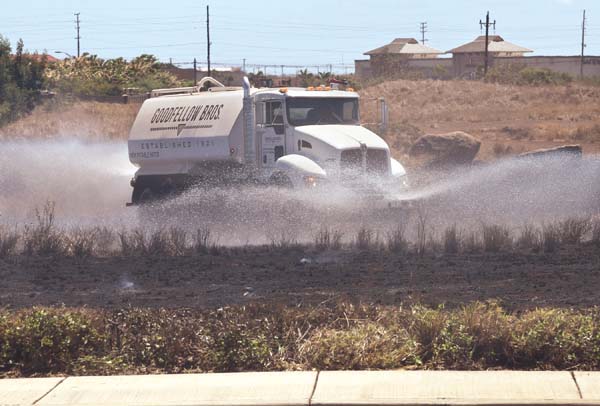 A Goodfellow Bros. water truck driver circles a still-smoldering field next to Lowe’s in Puunene on Saturday morning.

Police had previously said they were looking for a maroon-colored Ford dually type truck that had been seen in the vicinity of the fire. On Tuesday, the department said it had contacted the operator of the truck and determined that the person was not a suspect in the investigation. Police thanked the public in helping to locate the truck and said that “support is still needed to find the person(s) responsible for the recent fires.”

Mayor Michael Victorino, who flew over the blaze site, said that after the fire jumped past Maui Veterans Highway, it went halfway up Haleakala Ranch and all the way toward Ohukai Road and north Kihei.

Firefighting and cleanup efforts were still ongoing on Tuesday as dispatch calls came in about flare-ups and state contractors from Imua Landscaping Co. were moving burnt and damaged trees away from Kuihelani Highway and other nearby places where trees were impacting the roadway and bridges.

Josh Spalding, an arborist with Imua Landscaping Co. on Maui, said since the fire he’s been seeing more feral pigs. On Friday, he saw a pig that was dying of apparent burns from the fire. Another showed up behind one of their work trucks Tuesday near Waikapu Stream.

Normally the pigs do not appear during high daylight hours, but Spalding assumed the fire disoriented them.

On Friday there were still trees on fire, Spalding said. On Tuesday, most of the fire was gone, although there may have been some embers here and there, he said.

Heavy equipment belonging to the county could be seen damaged near Kuihelani Highway on Tuesday.

County spokesman Chris Sugidono said that a motor grader, a backhoe loader and a front-end loader, which were all inoperable, were damaged. But the equipment, worth around $10,000, was going to be auctioned.

Sugidono said when the Department of Public Works was notified about the fire, the conditions were too dangerous to send out personnel to remove the equipment.

Yatsushiro said besides Mahi Pono land, a rough analysis of the burn area shows that other entities affected by the fire include Maui County, National Park Service, Maui Electric, Haleakala Ranch, Monsanto (now known as Bayer Crop. Science Hawaii) in Kihei, and the state, including the Department of Hawaiian Home Lands.

He said there may be other smaller, private parcels, and some land may also still be owned by Alexander & Baldwin.

Tsutsui said that under the direction of the Maui Fire Department, Mahi Pono had 10 employees solely dedicated to managing the fire, which included providing assistance by putting up firebreaks.

They did so using a bulldozer, a couple of front-end loaders and several tractors near the Maui Electric Co. Maalaea Power Plant, as well as near the Haleakala Ranch border right below Pukalani and along Keahua Road.

Mahi Pono also offered the county access through its farm roads and kept its reservoirs full and accessible.

Tsutsui said they do have employees that have worked for Hawaiian Commercial & Sugar Co., which in the past had assisted fire crews in responding to cane field fires.

Yatsushiro said that MFD has had meetings in the past with A&B and also with Mahi Pono regarding fire/fuel mitigation and emergency plans. He said these processes are ongoing.

At the most active part of the wildfire, Yatsushiro said there were about 50 uniformed personnel engaged in firefighting efforts. This was in addition to state personnel and private assistance.

So far, a “rough estimate” for the Fire Department’s operations for the fire is around $400,000, Yatsushiro said.

“Many firefighters came in to assist with battling this fire as part of an emergency call-back,” Yatsushiro said, explaining that this occurs when a firefighter is on a scheduled day off but comes back to work.

But he added that the department always has to consider rest cycles for its personnel to ensure safe and efficient operations.

As for the fast-moving wildfire that took off on Thursday, Yatsushiro said that dry brush and kiawe provided fuel, and that the very dry summer conditions “most definitely” allowed for the vegetation to become extremely vulnerable.

On Thursday, the winds were strong and blowing toward the southeast direction, influenced by the central valley of the island that acted as a funnel.

“Had the winds been blowing strong from the south, the fire would probably move predominantly in the opposite direction,” also as a result of the island’s topographical features, Yatsushiro said.

Fire crews were able to get a handle on the fire thanks to a change in weather around sunset on Thursday, as well as the assistance of other agencies and private companies, which provided heavy equipment.

The forward progression of the fire was stopped above Ohukai Road in north Kihei by widening an existing dirt road and burning out fuels to stop the approaching fire front.

He said the process was aided by the drop in wind speeds, a shift in wind direction from westerly to downslope and a decrease in temperature and increase in relative humidity at sunset.

Yatsushiro added that the assistance of helicopters in the blaze allowed a fast response to inaccessible areas and also provided an aerial look of the incident so a plan of attack could be created.

At one point there were three helicopters, along with a National Guard Chinook helicopter, that responded.