County moves to take wells from exploratory to full production 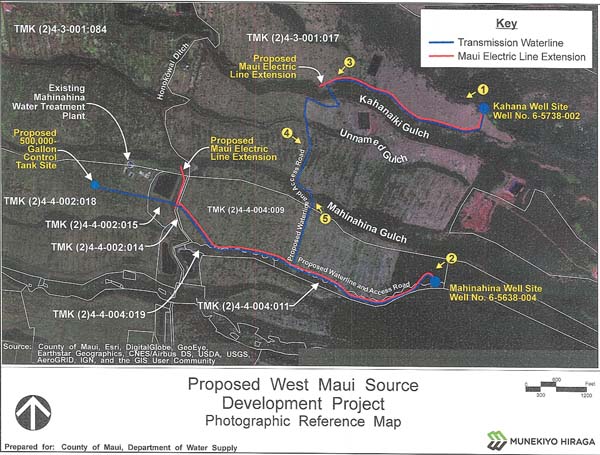 Facing an anticipated spike in water demand for West Maui over the next decade or so, the county aims to bring two Lahaina wells online in the near future with an $18.4 million, 11.5-acre project, according to a final environmental assessment released Tuesday.

County and state money, such as the Drinking Water State Revolving Fund, would pay for the project, which would start with the Kahana Well and be completed within phases.

Future water demand in the West Maui area is expected to increase from 9 million gallons per day to 16 mgd by 2035, according to the Maui Island Water Use and Development Plan, which the department is currently working to update.

The Mahinahina and Kahana wells, located about 3 miles mauka of Honokowai Beach Park, would provide 1.63 mgd of additional water to meet projected needs, while also serving as a backup for existing users.

The department has drilled and tested both exploratory wells and results show they have reliable capacity, the report said.

The Mahinahina Well is on state lands; the Kahana Well sits on property owned by Maui Land & Pineapple Co.; and the tank would be located on 1.8 acres owned by the state Department of Hawaiian Home Lands adjacent to the Mahinahina treatment plant.

Under the county’s proposed plans, the Mahinahina Well site would include a well pump producing 700 gallons per minute, a 300,000-gallon control tank and a 52-foot-long, 20-foot-wide concrete masonry unit control building to house the chlorination system, supervisory control and data acquisition system and electric equipment. The well would draw 0.672 mgd from the Honokowai Aquifer, based on an operational schedule of 16 hours of pumping per 24-hour period.

The Kahana Well site would include a 1,000-gallon-per-minute well pump, a 30,000-gallon control tank and a 65-foot-4-inch-long, 20-foot-wide concrete masonry unit control building to house the same equipment as the Mahinahina site. The well would draw 0.96 mgd from the Honolua Aquifer.

Water from both wells would be pumped into control tanks on each site. The water would go through a chlorination unit for treatment and be transported by gravity to the 500,000-gallon control tank. From there, the water would be transmitted to the department’s existing 2 million-gallon Honokowai storage tank located about 1 mile west of the Mahinahina treatment plant.

Once the county completes the environmental assessment process and gets the necessary permits, the Kahana Well and the necessary waterlines and access roads would go out to bid. Construction would take about 18 months from the notice-to-proceed date. The Mahinahina Well site would be developed at a later date. The project would likely be carried out in two phases due to funding constraints, the report said.

While the project area covers several large parcels of land spanning 3,501 acres, the improvements would be limited to 11.5 acres.

For more information or to view the final environmental assessment, visit oeqc2.doh.hawaii.gov/The_Environmental_Notice/2019-07-23-TEN.pdf.