First Rapid Ohia Death case may not be Maui’s last

Expert says disease found in single tree, but ‘most likely’ will appear again 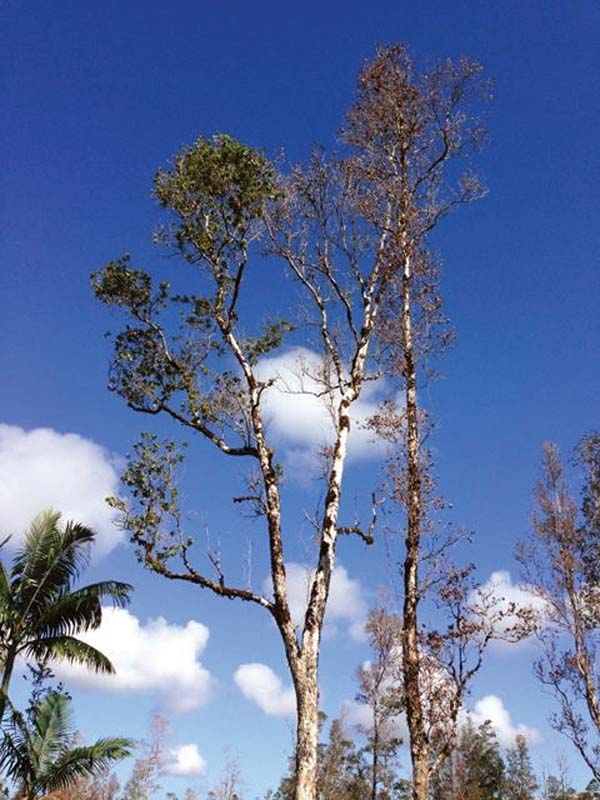 An ohia stands tall on Hawaii island but has one infected branch that will quickly kill the rest of the tree. According to Lissa Strohecker of the Maui Invasive Species Committee, a tree in Hana that was infected by Rapid Ohia Death was a bit smaller than the one pictured, but represents a very similar situation. Photo courtesy of JB Friday, University of Hawaii at Manoa College of Tropical Agriculture and Human Resources.

A lone 15- to 20-foot tall ohia tree in the Koali area of Hana “did not look healthy” before testing positive for Rapid Ohia Death, Maui’s first confirmed case of the fungal disease and perhaps not the last.

While the single tree was infected with a less aggressive version of Rapid Ohia Death, known as Ceratocystis huliohia, and even though the tree “is going to be burned” on Friday, there is a chance the disease has spread, according to the manager of the Maui Invasive Species Committee.

“Even if this one incident is contained, we will most likely find this again,” Adam Radford said Wed-nesday morning via phone. “But we will continue to be vigilant looking elsewhere because it is quite probable that there are other trees that have become infected, unfortunately.”

According to Radford, the infected tree was spotted by a MISC crew member last week, who then immediately notified a fellow MISC specialist to take samples. Reports show that the ohia was located on private property by a loi patch.

Radford said that the crew member who initially reported the case is a family member of the property owner.

The Department of Land and Natural Resources announced Tuesday night in a press release that its Division of Forestry and Wildlife on Maui plan to contact Kipahulu and Hana residents to spread awareness of the contagious fungal disease.

Ohia trees make up approximately 80 percent of the state’s native forests, according to the Hawaii Invasive Species Council. They typically grow in areas with more rainfall, Radford said, but can be found in most locations on Maui.

The first statewide case of Rapid Ohia Death, which can kill an ohia tree very quickly, was discovered on Hawaii island in 2014, and it has been pointed out that Kohala is only 40 miles from East Maui.

“Given the location, it is possible that it moved naturally from the Big Island because it’s almost a direct line of site right from the infestation,” Radford said. “Or quite possibly got here on equipment or from people’s shoes, which is really the more common way that invasive species tend to spread.”

Genetic analysis conducted by DLNR will hopefully pinpoint where and how the Ceratocystis huliohia landed in Maui, said Lissa Strohecker, public relations and education specialist of MISC.

In the meantime, Radford added that “prevention and reporting” are the most effective ways the community can help.

Symptoms of Rapid Ohia Death include crowns or leaves turning dark yellow or brown as well as fungus growing from the inside of the ohia tree, which can be reported to the Maui Invasive Species Committee. Photos and the location of the infected tree should also be sent with the report.

“We have a very strong working group here of all the conservation entities, so all the different organizations that work on environmental conservation are already activated and mobilized to respond to this outbreak and be prepared for more or future outbreaks,” he said.

DLNR helps the committee in coordinating surveys, such as the quarterly aerial surveys, as well as samples, which are typically sent to a lab in Hilo for further testing.

The next Maui quarterly survey is scheduled to begin July 15.

In addition to the Maui Invasive Species Committee, reports of any suspected trees can be called in to the Division of Forestry and Wildlife Maui office at 984-8100.