Friends of NRA event to go on without guns

Photos, not physical firearms, to display at live, silent auction 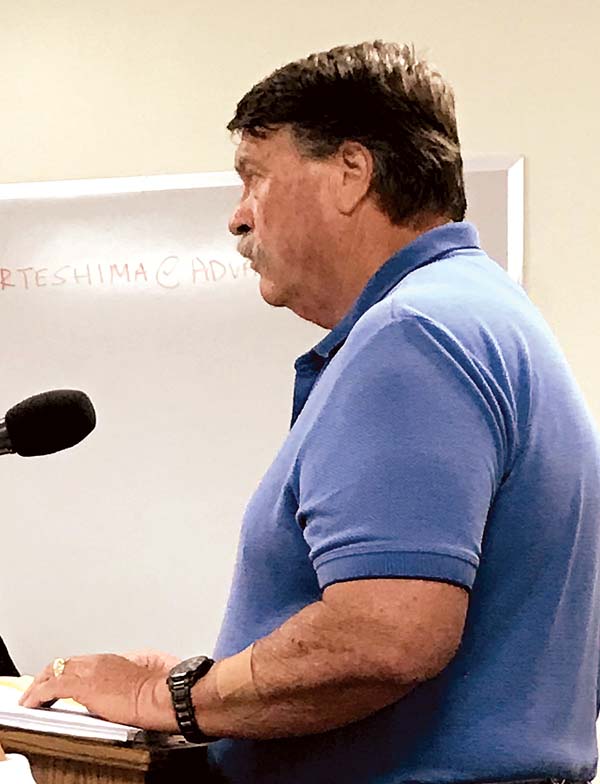 Mark Redeker, chairman of a live and silent auction for the Maui Friends of the NRA, asked the Maui County Liquor Commission if inoperable firearms, instead of just photos, could be brought to an NRA fundraising event as proposed by the liquor licensee. The Maui News / MELISSA TANJI photo

WAILUKU — The Maui County Liquor Commission on Wednesday approved a permit for the King Kamehameha Golf Club in Waikapu to hold a live and silent auction for a Maui Friends of the NRA event featuring only photos of guns that will be up for bid.

Liquor licensee, MMK Maui L.P. doing business as The King Kamehameha Golf Club, requested the approval and said that a Maui police officer will be on duty during the event, which the Friends of the NRA website says is scheduled for Aug. 24.

For the same event last year, commissioners ordered organizers to replace real weapons with pictures after expressing concerns over the possibility of the public getting ahold of the firearms at the auction or while in transit.

At the meeting Wednesday, event chairman Mark Redeker asked that the firearms be allowed on-site. He said that the guns all would be disabled with parts removed to make them inoperable. The group also would work with police to ensure safety. Redeker is a member of the Maui Police Commission, which sets policy for the Maui Police Department.

He noted that having firearms on-site during these types of auctions are common across the nation and that 22,000 of these dinners have been held in the last 30 years.

“There has never been one problem,” he said, adding that Hawaii has had 60 of these events as well.

Redeker also took issue with Police Department testimony last year to the commission. A police official said that the public may be able to take the firearms at the auction and use them and that there is the possibility of firearms being stolen on the way to the auction.

Redeker said that not having the firearms causes the event to raise less money, which goes toward scholarships. Commissioner Leslie-Ann Yokouchi asked him about what other types of programs the auction money is used for.

Redeker replied that funds are given to local clubs for shooting programs along with other community groups, such as the Boy Scouts.

“Why do we keep on funding programs that include guns?” Yokouchi said.

Commissioner Alberta de Jetley said she agreed with Yokouchi but added that there are many guns on Lanai, her home island. She noted a need to clamp down on firearms, explaining that her grandson on the Mainland had a shooting at his school.

First Deputy Corporation Counsel Ed Kushi Jr. reminded the commission that the agenda item was to approve a permit for the auction that featured photos of the guns. He said that the licensee would have to be the one to change the request of the commission.