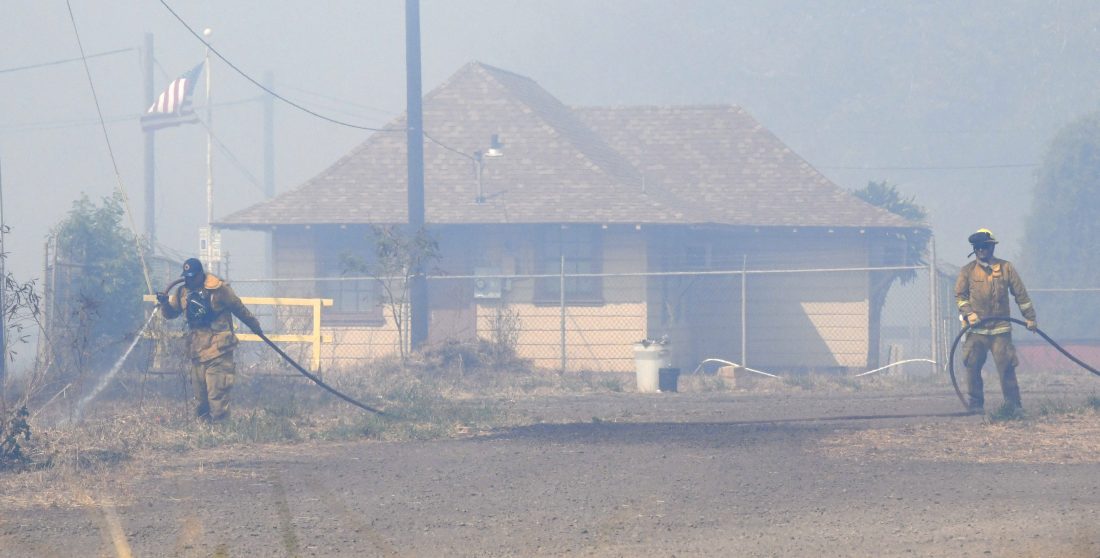 KAHULUI — Arson was suspected in a separate Puunene brush fire Friday that consumed more than 200 acres and diverted needed resources from the larger South Maui blaze.

The fire, reported at 1:30 p.m. off Hookele Street, quickly escalated due to wind and dry conditions, forcing the evacuation of nearby businesses, such as Target and Lowe’s, and closing major traffic arteries. The blaze was 80 percent contained by 9 p.m. Friday, according to Fire Services Chief Rylan Yatsushiro. The county said 200 acres were consumed as of 6:30 p.m.; it did not have an acreage update at 9:30 p.m.

Maui Police Department released information Friday night about a “possibly maroon-colored Ford dually-type truck,” early- to mid-2000s model with racks, which was seen leaving the Hookele Street fire area on Friday. Police are seeking information on the driver and on the vehicle.

Yatsushiro said that when crews got to the scene, there was a “well-involved brush fire.” 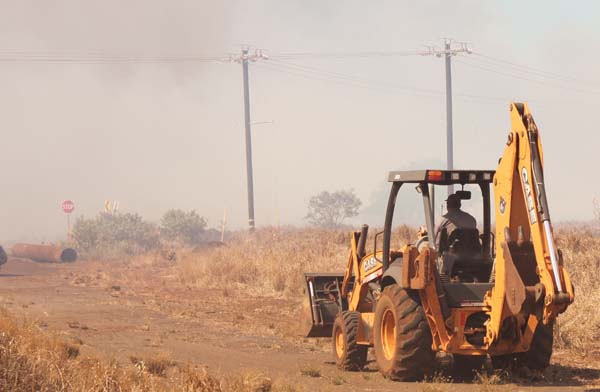 “This fire was moving really fast,” he said during a news conference. “We have pretty brisk winds in that area.”

Two abandoned structures were destroyed, according to Yatsushiro. No other damage or injuries were reported by the county.

MEO had evacuated the transportation site at Puunene, and office staff relocated to the MEO Family Center in Wailuku, according to Debbie Cabebe, MEO CEO.

Paratransit and Human Service Transportation services, which are operated by MEO, had all nonmedical trips canceled for the rest of the day as a result of the fire, Cabebe said. 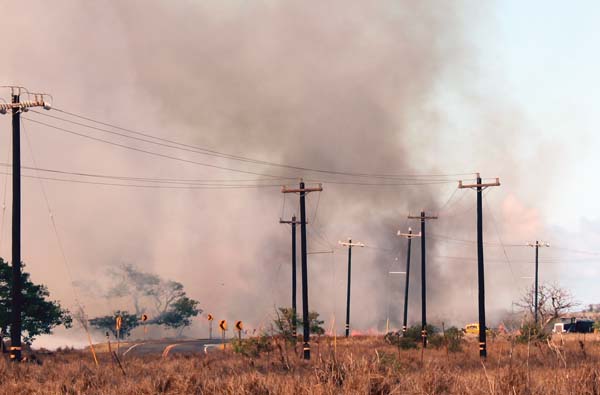 Flames and smoke line the horizon of a Puunene farm field near the former sugar mill. A fast-moving fire steered by strong winds charred 200 acres in the area Friday. -- The Maui News / KEHAULANI CERIZO photo

Target had reopened around 5:30 p.m., but Lowe’s, Starbucks, Fork and Salad, Jersey Mike’s and other area businesses remained closed for the night.

Mahi Pono staff, who were working on farming operations earlier in the day, were moving new tractors and equipment out of harm’s way while assisting firefighting efforts during the blaze Friday afternoon. The Puunene area holds planting plots for Mahi Pono, which purchased 41,000 acres of former sugar cane land from Alexander & Baldwin in December.

A 40-year-old man was arrested last week for arson following a Kahului brush fire that charred 5 acres behind Walmart on July 3. He was released pending further investigation.

Maui police said tips on the Hookele Street fire vehicle and driver can be emailed to fire.damage@mpd.net; via direct message on the MPD Facebook page; or by calling 244-6434. 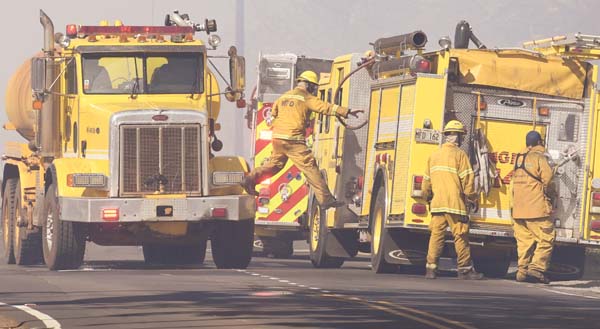 A Maui Fire Department firefighter jumps from one truck to another while helping battle Friday afternoon’s brush fire in Puunene. -- The Maui News / MATTHEW THAYER photo

A Maui Fire Department firefighter jumps from one truck to another while helping battle Friday afternoon’s brush fire in Puunene. — The Maui News / MATTHEW THAYER photo