Vehicle, container volume up in forecast 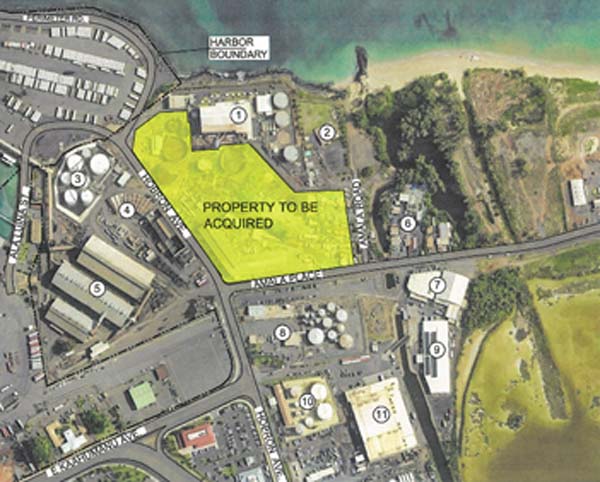 With an increase in cargo that could stretch the limits of Kahului Harbor in three years, the state plans this year to purchase 9 acres of Alexander & Baldwin land near the harbor to provide more space for storage, according to a draft environmental assessment released Monday.

The cost to purchase the 9.308 acres of land near Maui Electric Co.’s Kahului Power Plant has not yet been determined; an appraisal needs to be completed and a final price negotiated, the report said. State Department of Transportation special funds would be used for the purchase.

A&B spokesman Darren Pai said Thursday that discussions are ongoing with the state regarding the potential purchase of the property. A draft environmental assessment is part of that process.

Development and improvements for the proposed cargo yard are estimated at $29 million, according to the report, found in the Office of Environmental Control’s “The Environmental Notice.”

Two lots — the 7.16 acre 1A and 2.128 acre 1B — would be purchased in one transaction as early as this year and development would happen in phases. The lots are bounded by Hobron Avenue, Amala Road, Amala Place, MECO and Hale Nanea. Lot 1A could be developed upon purchase. Lot 1B development timelines would depend on current occupant Kahului Trucking & Storage, an A&B subsidiary, which plans to relocate within five years of the acquisition. 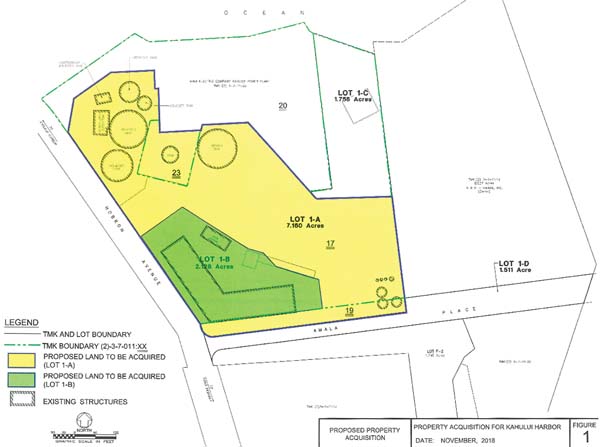 “To the extent applicable, the proposed improvements will be designed to meet Leadership in Energy and Environmental Design and Green Building Standards,” the report said.

Kahului Harbor, the only commercial harbor on Maui and one of 10 commercial harbors in the state, is the third busiest in Hawaii based on tonnage and the second largest based on operating revenue. It is operated by the state DOT.

Incoming, off-loaded cargo tonnage is about two-thirds of the total tonnage at the harbor, which includes containerized cargo with personal items, food items and building supplies, according to the report.

“Based on historical data, the cargo volume may exceed the terminal capacity within three years,” the report said.

A state 2012 development plan for harbors, based on 2005 container and vehicle volumes, indicated that containers will double and vehicles will increase by 33 percent by 2030. The plan said about 8 acres of additional cargo storage is needed at Kahului Harbor.

“As cargo demand increases within the existing cargo areas, congestion and safety concerns increase at the harbor,” the document said.

Pier 1, which is 1,845 feet long and used mainly for cargo ships and passenger cruise ships, has about 15 acres for cargo handling and storage yard. Pier 2, which is 893 feet long and used by Young Brothers interisland cargo, a cement barge and a liquefied petroleum gas barge, along with the 500-foot long Pier 3, used by barges that transport fuel and dry bulk cargo, have combined storage areas of about 23 acres.

Once the property is formally acquired, the state will need several years to develop the harbor due to the state’s building requirements, the report said. No other project timeline was included.

Public comment on the draft environmental assessment is due by Aug. 7 and should be sent to the proposing agency, the state Department of Transportation, by email to sandra.c.rossetter@hawaii.govDOT or mail at Harbors Division, 79 S. Nimitz Highway, Honolulu 96813. For more information, contact Sandra Rossetter at (808) 587-1886.

For information or to view the report, go to oeqc2.doh.hawaii.gov.