Space is larger than the old Kahului store 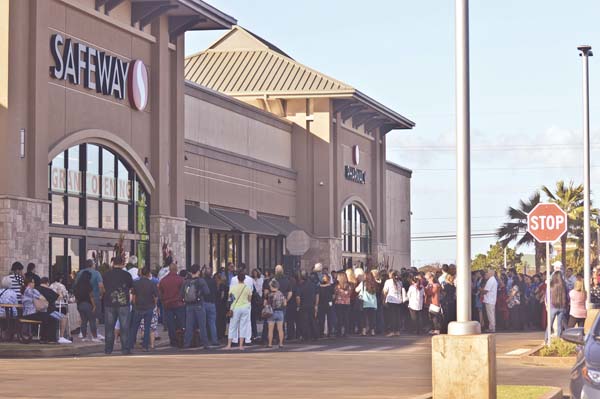 At least 200 people, including Safeway workers, vendors, politicians and members of the public, gathered at a blessing Wednesday morning for the new store at the Ho‘okele Shopping Center in Kahului. The Maui News MELISSA TANJI photos

KAHULUI — At least 200 people, including workers, vendors and members of the public, welcomed the opening of the new Safeway store Wednesday at the Ho’okele Shopping Center in Kahului.

“Right next to the airport, (we’ll) welcome visitors and serving our local community,” said George Glukfeld, Hawaii general manager of Safeway, during the blessing.

The 57,000-square-foot store, which is 17,000 square feet larger than the Kahului store along Kamehameha Avenue it replaced, will continue the same offerings as the old store, Glukfeld said after the ceremony. The Kamehameha Avenue store, which opened in 1983, closed Friday night after running out of inventory. The bank and pharmacy stayed open until Tuesday.

But the new Safeway has an expanded hot food line and offers more Asian food and healthy food options, Glukfeld said. Its organic offerings are larger, along with its poke case and butcher block.

The new Safeway, an anchor tenant in the Ho’okele Shopping Center developed by Alexander & Baldwin, also has a fuel station that is still under construction. It is scheduled to open in the fall. The store also has a Starbucks, pharmacy and an in-store Bank of Hawaii branch. 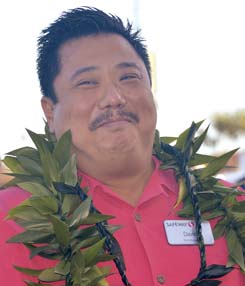 The new store is led by Store Director Davin Kinoshita. It will be open 24 hours a day and employs more than 150 workers, half of which came from the old Kahului store. Old-time cashiers and workers from the Kamehameha Avenue store were in the crowd during the ceremony and were also working when the new store’s doors opened.

Shopper Bridget Apuna-Miyamoto called the poke display “so beautiful.” The display was still intact as she was just the second shopper to buy the delicacies Wednesday after doors opened a little after 8 a.m.

“I just came to see,” Apuna-Miyamoto said, admitting her pantry and refrigerator were already full back home in Kahului.

She said the aisles are spacious. 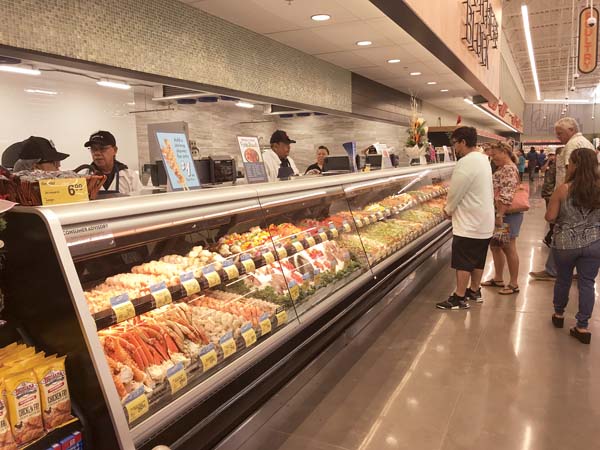 The new Safeway at the Ho‘okele Shopping Center boasts a larger poke and seafood counter than the store it replaced along Kamehameha Avenue.

But she admitted that for those old-timers in Kahului, the drive was a bit far to the outskirts of Kahului. She said prices were similar to other Safeway stores on island, with some prices even higher for some items.

Family members Cathy Tsue and Ada Acain were among the first customers waiting to get into the store Wednesday morning, although there was no line initially. They were there before 7 a.m..

“We just want to see what they have. Any deals help,” said Tsue, who grew up on Maui and spends summers here, but returns to California for the rest of the year.

Tsue likes the $5 deals that Safeway offers on Fridays.

As she ventured into the store, Tsue found a bottle of orange juice but was still perusing the aisles.

The distance of the new Safeway was also a factor for Acain, who said she doesn’t drive and would normally take the Maui Bus. However, she didn’t see any bus stops nearby, so she said her husband would probably have to take her to the new Safeway.

But overall, the Makawao resident said, “Any new store is good.”

Tsue added that new stores drive up competition, so it could mean better prices for customers.

The Ho’okele store is the fourth Safeway on Maui, along with Kihei, Lahaina and Wailuku.

State Sen. Gil Keith-Agaran said he was pleased with Safeway’s approximately $10 million investment in the new Kahului store, as Safeway announced around two years ago it would spend around $17 million on Hawaii stores.

“Thank you also for spending it here,” he said, while reminiscing of the old sugar cane area where the store is now located.

He also said he will miss the old Kamehameha Avenue store, but knows change has to come.

Also during the blessing, the Safeway Foundation made several donations to local organizations, including $2,500 each to King Kekaulike High School, Maui Food Bank and $25,000 to the Pacific Cancer Foundation.