Oprah pops in to Maui Humane Society to say ‘thank you’

Her private road was all the rage on Thursday 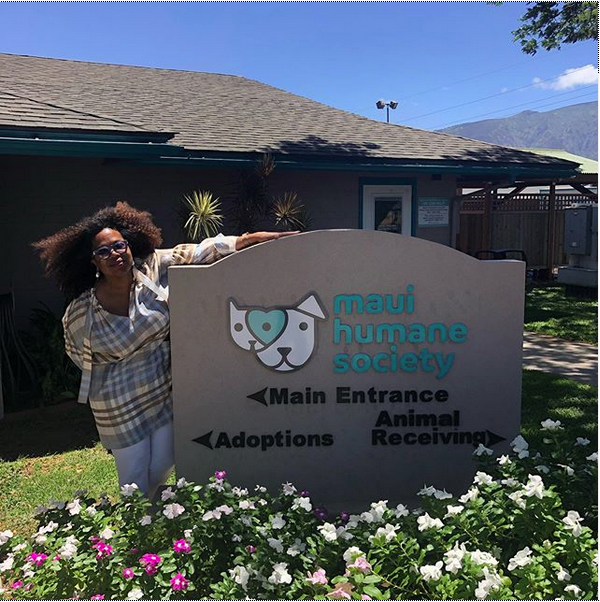 Oprah Winfrey stopped by Maui Humane Society on Saturday afternoon, hours after animals returned to the Puunene shelter from a two-night evacuation in Kahului due to the South Maui wildfire.

“Everyone’s safe including all the animals,” she wrote on social media. “Thank you for your service.”

Winfrey, a part-time Maui resident, posted a photo of her at the shelter sign and hashtagged the Maui police and fire departments, along with the Maui Humane Society.

Nancy Willis, MHS director of development and community outreach, said Winfrey came in and thanked a volunteer then left. Willis added that the celebrity is a supporter of Maui Humane Society. 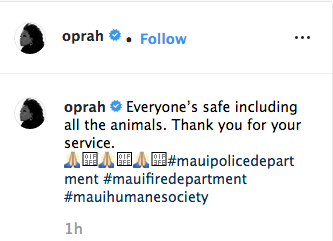 “It was super exciting,” Willis said, who wasn’t onsite but got the call when Winfrey dropped in. “We are appreciative and grateful that she recognized the hard work of the community.”

More than 200 animals were evacuated Thursday when a brush fire started in Waikapu and moved south toward Kihei, reaching within feet of the Maui Humane Society before moving farther south. The wildfire is nearing containment, the county said Saturday evening.

The celebrity, who owns a private road from Kihei to Keokea, was the subject of local and national discussion after motorists were temporarily trapped on the south side Thursday due to the blaze.

The possibility of using Winfrey’s road was raised on social media Thursday, and she responded Thursday night to a Twitter post from Jack Moussally asking her to open the road.

“Hi there Jack. Access to the road was given to county officials immediately,” her tweet said. “This was many hours ago. Hoping for the safety of all.”

At a news conference Friday, Mayor Michael Victorino said he wouldn’t encourage nighttime use of Winfrey’s road because it wasn’t designed for travel at night.

He said Haleakala Ranch has a portion of that road as well.

Responding to complaints about why people weren’t allowed to use the road, Victorino said smoke was headed Upcountry on Thursday night.

“I’m going to send people who are in smoke to Kula to get stuck in more smoke?” he asked.

He added that there weren’t enough police resources to ensure safe travel.

“The last thing I want to do is have an accident or another challenge on that mountainside,” Victorino said.