Still no evidence of big leak in Waikapu system

Spike in consumption could be due to higher usage 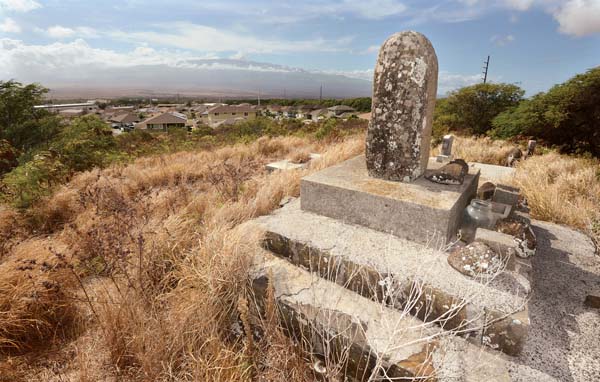 The Waikapu Cemetery overlooks the growing community where water use currently is under voluntary cutbacks. The county Department of Water Supply is still working to determine whether higher usage or a leak has caused water consumption to increase by 200,000 gallons a day. The department is also working to repair a faulty pump at the Waikapu well. The Maui News / MATTHEW THAYER photo

A month after issuing water conservation notices for the Waikapu area, the county Department of Water Supply is still unsure what’s been causing the major spike in water use.

Water Supply Director Jeff Pearson said the department has not found any evidence of a leak that could be causing the increase in consumption, which is “not a good sign.”

“A leak of course is a huge possibility, but because the number was so huge, we didn’t attribute it to increased usage,” Pearson told The Maui News on Tuesday. “But as we continue to look at that area, it just might be increased usage. . . . There’s much more growth, new houses. We’re aware of that. But it just seemed like too high a number.”

Pearson said earlier this month that water consumption averaged 200,000 gallons a day more in the month of June as compared to the same month last year. He said a spike of that magnitude seemed to indicate “that there’s more than just additional use” going on — possibly a leak.

Since then, the department has found some small leaks, but nothing that could be causing that large of an increase, Pearson said.

The director acknowledged that it could just be higher use. It’s the middle of a record-breaking summer, the weather is hotter and drier, kids are out and about.

Pearson said staff is still looking into recent meter use for specific areas and comparing them with the previous year to figure out where the high use is coming from.

On June 21, the department began calling for customers in Waikapu, Kehalani Mauka and Wailuku Heights to conserve water and to avoid unnecessary water use until further notice. The department said the notice was due to an unidentified increase in consumption.

On June 29, the department sent out another notice to customers in the same areas, asking them to immediately halt all unnecessary water use until further notice because the department faced potential water outages in those areas. The department said the Waikapu/Wailuku water tanks were being depleted due to “very high consumption” of water and the temporary loss of Waikapu’s well due to mechanical and electrical issues.

The department put out a bid on July 15 looking for a contractor to “remove and replace one deep set submersible pumping unit” for the Waikapu well, according to the bid posting. Pearson said that the department is working to sign a contract with a company, “hopefully this week.” He said it was possible that “three months from today” the well could be back online.

The department has been taking measures to offset the loss of the well, and “a combination of pumping water among tanks and ongoing water conservation” has helped keep the tanks level and eased concerns about possible water outages, Pearson said in a news release on Tuesday.

“We are still asking residents to be vigilant and not use water unnecessarily,” he said. “But we also want to thank our customers and employees for their efforts and assure them that they are making a difference. Reduced water usage has helped prevent service interruptions.”

The director told The Maui News that it was less of a source issue than it was a systems issue, and temporarily installing a diesel pump by one of the Wailuku wells has helped with the tank levels.

Meanwhile, another area that’s been asked to conserve water this summer is Upcountry, which has been under a Stage 1 water shortage notice since late May. The notice calls for a 10 percent voluntary reduction in water use.

When asked whether there was a possibility that Upcountry could be upgraded to a Stage 2 water shortage, Pearson said “we’re going to wait and see.” A Stage 2 shortage can be called when demand is projected to exceed supply by 16 to 30 percent; this declaration will lead to increases in water rates to decrease usage.

Staff met Monday morning and was looking into pumping water up the mountain. But pumping can cost thousands of dollars a day, and Pearson said that they plan to “hold off on that until we see what happens this weekend” with Hurricane Erick predicted to pass south of the islands.

As with the Waikapu situation, there are changes the department can make to its operations to help offset the falling water levels, but it’s also up against a demand for water that’s growing due to the drier weather.

“Of course, we’re still in the Stage 1 drought, so the concern is still there,” Pearson said. “The levels are clearly dropping. The use is not reducing.”

The department offers the following advice to customers looking to curb water usage:

• Do not water lawns or irrigate ground cover.

• Turn off the water faucet when washing dishes, brushing teeth or shaving.

• Shorten shower time and only partially fill tubs for baths.

• Go to a car wash if needed. Most car washes on Maui are fitted with recirculating water.

• Check in and around homes for leaks.