Walter Ritte and Kaleikoa Ka‘eo, both from Maui County, chain themselves to cattle guard in roadway 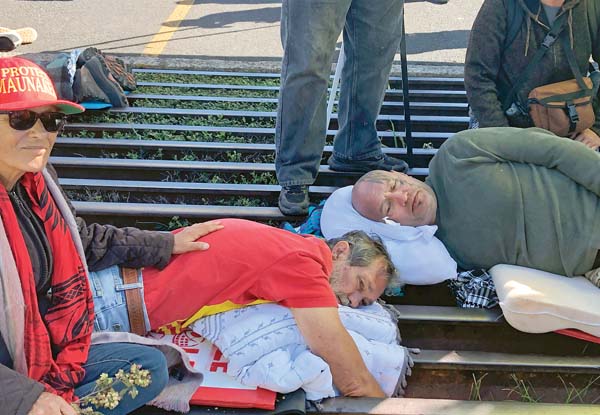 Activists Walter Ritte (left) of Molokai and Kaleikoa Ka‘eo of Maui lie chained to a cattle guard, blocking a road at the base of Mauna Kea on Hawaii island Monday as they protest the construction of a giant telescope on land that some Native Hawaiians consider sacred. At least 20 Maui County residents joined demonstrations against the Thirty Meter Telescope on Mauna Kea on Monday, according to reports. Photos via AP

At least 20 Maui County residents were present at the base of Mauna Kea on Monday as Native Hawaiians and other protesters gathered to oppose the start of construction of the Thirty Meter Telescope, with some county residents chaining themselves to a cattle guard, blocking access to the summit.

Native Hawaiians and others are protesting the construction, saying the mountain is sacred and the telescope will desecrate the land and disturb the ecosystem.

In a video clip provided by Maui resident Noelani Ahia, Ka’eo says that he is resisting the attempt to construct the telescope “upon our mountain, our sacred mountain, of Mauna Kea.”

“As the kanaka of this land, we will try our hardest, (our) best in fact, to maintain our dignity in our struggle to reclaim our right to our self-determination of what we want to do for the future of our people,” said Ka’eo, an assistant professor of Hawaiian Studies at University of Hawaii Maui College. “We can no longer tolerate the (Gov.) Ige’s administration and the state of Hawaii, including the Hawaiian Homelands, for their not just mistreatment, but really mismanagement of the affairs for our people.” 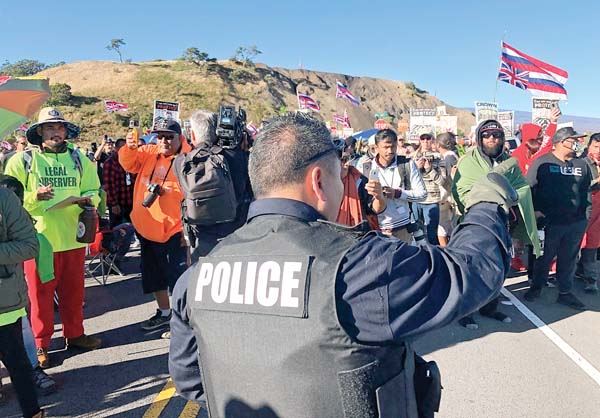 A police officer gestures to demonstrators blocking a road Monday morning at the base of Mauna Kea.

The men reportedly were chained for more than eight hours and could be seen on television and social media video on their stomachs.

Ahia, who is part of the Mauna Medic Healers Hui, which is administering first aid on the mountain, said Monday afternoon via text message that after more than eight hours, protesters got off of the cattle guard. There were no arrests.

A state Department of Land and Natural Resources video showed protesters getting up from the cattle guard and shaking hands with law enforcement officers. Protesters later called for the removal of a gate that was put up not long after they moved off the cattle guard.

Earlier Monday, Ahia said via cellphone that she arrived at the summit around 3 a.m. and saw people had already locked down into the cattle guard.

“It was freezing cold,” she said. “We are trying to get them blankets and hot packs.”

She estimated it was around 30 degrees, but that around noon the temperatures were in the 70s and the sun was out, so those on cattle guard had shade placed over them in the form of umbrellas and pop-up tents.

In videos, Ahia can be seen sitting next to the protesters on the guard, making sure they were OK.

Ahia said she wasn’t able to see all of those atop the mountain but said she saw at least 20 Maui County residents there.

“The most beautiful thing about today, is how our people are coming together,” she said as the phone reception went in and out.

Ahia said the lands are crown lands. “They belong to the Hawaiian people,” she said.

The giant telescope is being developed by a nonprofit international partnership between a number of California universities as well as scientific and astronomy organizations in Canada, China, India and Japan.

While Ahia’s first priority is to keep watch over those on the mountain she said: “My heart is always heavy when I have to do these (types) of things. When I have to see people suffer, for something I feel is a human right.”

She added that the protest is for the kupuna and future generations as well.

A “Stand with Mauna Kea” rally was scheduled Monday afternoon on Maui at the Haleakala and Hana Highway intersections.

* Melissa Tanji can be reached at mtanji@mauinews.com. The Associated Press contributed to this story.

A police officer gestures to demonstrators blocking a road Monday morning at the base of Mauna Kea.

Activists Walter Ritte (left) of Molokai and Kaleikoa Ka‘eo of Maui lie chained to a cattle guard, blocking a road at the base of Mauna Kea on Hawaii island Monday as they protest the construction of a giant telescope on land that some Native Hawaiians consider sacred. At least 20 Maui County residents joined demonstrations against the Thirty Meter Telescope on Mauna Kea on Monday, according to reports. Photos via AP

Catherine Nobriga Kim of Maui Soda & Ice Works and Roselani Ice Cream explains how Roselani has worked to keep its product relevant over the years. Nobriga Kim was among the longtime business owners who spoke to entrepreneurs and small business owners at a workshop at the Maui Research & Technology Park last week. The Maui News / COLLEEN UECHI photos

Scott Rabe of Accel Event Rentals chats with a local entrepreneur during a break in the workshop.

The median sales price for condos in Maui County hit $552,000 last month, reaching a 10-year high for Realtors Association of Maui records, a recent report said. The all-time median high price for condos, such as these pictured in Maalaea last year, is $805,000, logged in January 2009. The Maui News / MATTHEW THAYER photo