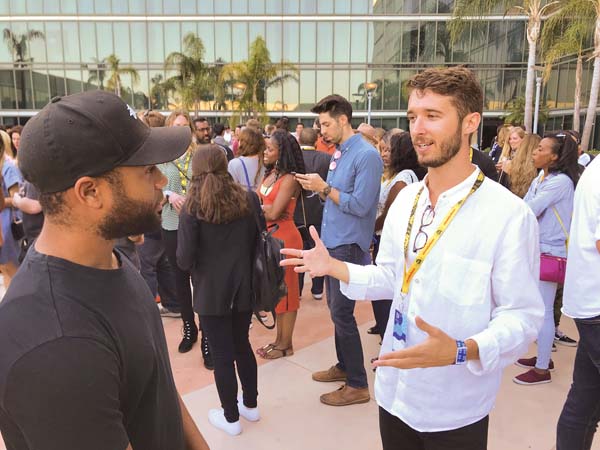 “Without the help of Creative Lab Hawaii, I would not be here at all,” Hyde said last week in a phone interview from the Mainland event. “To be (at VidCon), it’s so inspiring to me . . . to have the opportunity to meet people in the business. I would not even be here if I didn’t get into the program because I didn’t have the means to take on such an enormous project on my own.”

The state Department of Business, Economic Development and Tourism’s Creative Industries Division chose three finalists from its Creative Lab Hawaii Web-Series Immersive program to present their projects at this year’s VidCon, which ran from July 10 to Saturday in Anaheim, Calif.

At VidCon, Hyde got the opportunity to learn about the growing web industry and meet with executives of large media businesses, such as YouTube, Facebook and Instagram.

“I hope to learn and network and connect with people who may be interested in reading my script or watching my pilot episode when it’s ready,” he said at the start of VidCon. “I think a story about kids growing up in Hawaii has to be told by some in Hawaii. I want it to be innovative and fresh.”

Hyde, along with fellow lifelong Hawaii resident Chad Martin and Josh Noble, who works in Los Angeles, were chosen based on the 2018 Web-Series Immersive cohort, which included a five-day workshop and yearlong mentorship.

“VidCon is a key step in the development of these projects created for the mobile and online space,” said Georja Skinner in a news release. She is the chief officer of DBEDT’s Creative Industries Division and founder of Creative Lab Hawaii. “Spencer, Chad and Josh are putting into practice the insights CLH mentorship provides throughout these one-year immersive programs that prepare them to compete on a global level in the new frontier of the entertainment industry.”

The Creative Lab Hawaii program was founded in 2012 by DBEDT’s Creative Industries Division to expand the creative industry. The program provides Hawaii’s entrepreneurs training in producing, screenwriting, music and design, as well as immersive programs, ideation workshops and public keynotes.

Prior to CLH, Hyde earned his bachelor’s in fine arts in film and television production from New York University’s Tisch School of the Arts, before working in digital advertising for Lionsgate and Magnolia Pictures in Los Angeles.

After moving back to Maui, he started working as a television technician for the Department of Education, producing digital content about public education in Maui County.

“I just want to make people feel something,” he said. “That’s what I like about what I do at the DOE for instance. What I love is making a video that people watch and they feel something.