No other state facility has this problem 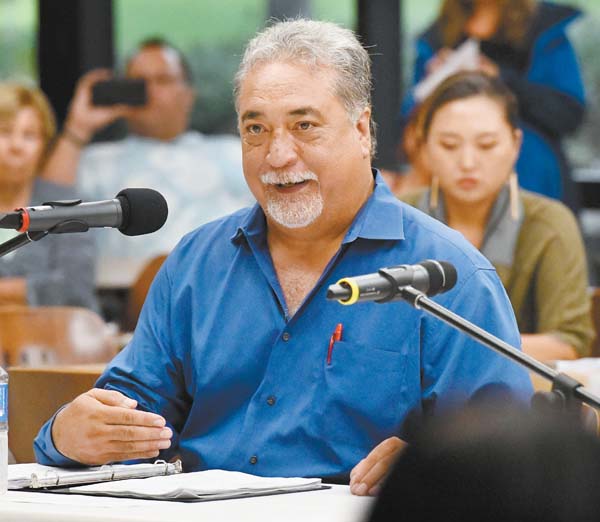 Department of Public Safety Director Nolan Espinda appeared before a joint state Senate committee informational meeting Tuesday at UH-Maui College. He said that cancellations of weekend inmate visits is only occurring at Maui Community Correctional Center due to a shortage of adult corrections officers. The Maui News / MATTHEW THAYER photo

KAHULUI — There may be more cancellations of weekend visits for inmates at Maui Community Correctional Center because of the “extreme shortage” of adult corrections officers, said the director of the state Department of Public Safety.

“Maui experienced canceled visitations the last two weeks. The past two weeks, none of the institutions (in the state) experienced any visit cancellations in the prior four years,” said director Nolan Espinda during a joint informational meeting of the Senate Ways and Means and Public Safety committees Tuesday evening at University of Hawaii Maui College.

“The past two weekends were really, really, bad. We anticipate that is going to continue,” Espinda said of the weekend visits at the Maui jail.

Because of the cancellations, the Public Safety Department on Tuesday added noncontact visits from 8 a.m. to 1 p.m. and 6 to 8 p.m. Tuesdays, Wednesdays and Thursdays. Appointments will need to be made.

Besides the August weekend cancellations, a Sunday one-hour family visit on July 14 was nixed as well, the department has said.

The Maui jail has 167 adult correctional officer positions, with 36 vacancies. The problem is exacerbated by 22 officers on workers’ compensation or authorized leave and 55 others granted federal family and medical leave. That leaves a total shortage of 113 positions and corrections officers on leave.

Espinda told senators that staffing goes from 52 correctional officers assigned to weekday shifts to 28 on weekends at the Maui jail. He said weekday numbers are higher because more officers are needed for transportation and other services not needed on weekends.

But even through 52 officers are assigned on weekdays and 28 on weekends, that doesn’t mean that all will show up, Espinda said.

By contract, there needs to be at least 20 officers to man posts on weekends, Espinda said. Sen. Kai Kahele asked if visitations still could go on with the minimum 20 officers.

“You may be able to do it; I wouldn’t guarantee it,” Espinda replied. “But . . . when I say 20, that’s the minimum number of people to have the institution run safely.”

Wailuku defense attorney Wendy Hudson said Wednesday that, so far, her clients have not been affected by the cancellations, which impact inmates and their families. Family members may have to take off work, arrange for babysitters and “jump through all kinds of hoops to even have the visit.”

Visits are particularly important for an inmate being transferred to another island or the Mainland, she said. That visit may be the last time an inmate will be able to see family members, who cannot afford to fly to Oahu or Arizona facilities, during the term of incarceration.

Hudson is glad there are more opportunities to have weekday visits, although those may cut into times for attorney-client meetings.

Public Safety spokeswoman Toni Schwartz said Wednesday that correctional officers from other islands will be coming to Maui to supplement staff beginning Sept. 2.

There are five teams that will rotate in. The teams will be made up of eight corrections officers, seven coming from Oahu and one from Hilo, Schwartz said.

State deputy sheriffs also have pitched in to help at the facility, the department has said.

“I can’t say enough what Herculean efforts they have done to keep that place going,” Espinda said of the Maui guards.

At Tuesday’s meeting, Espinda said the department has been participating in job fairs, have run advertisements and even examined tests to make it easier for applicants to apply and enter into a public safety career. But senators said the department needed to do more, such as exit interviews to find out reasons for departures.

There are many steps to becoming an adult corrections officer and applicants are lost along the way, Espinda said. The process involves passing written and physical ability tests, an oral interview, preofficer suitability screening and other pre-employment screenings. If the applicant clears all of the steps, he or she may enter basic corrections recruit training, which next begins on Oct. 21.

There were 72 applicants on Maui at the close of recruitment in March. The number has dwindled to five who passed the physical ability test in June. Maui applicants currently are awaiting results of oral interviews conducted this month, according information provided to senators by the Public Safety Department.

According to a posting seeking adult corrections officers for Maui, the salary is $4,185 per month.