Issues of cleanliness of the 45-year-old art piece led to its removal, says King 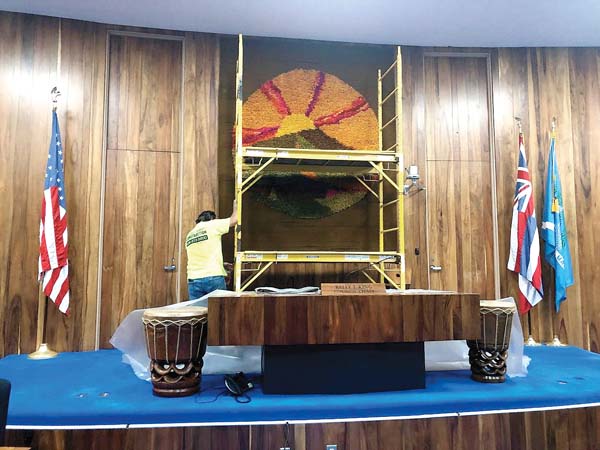 A worker takes down the 45-year-old tapestry from the Maui County Council Chambers on Aug. 15. Photo courtesy of Council Member Riki Hokama’s office

Maui County Council Member Riki Hokama is taking issue with council Chairwoman Kelly King’s decision to remove a more than 45-year-old tapestry that has hung in Council Chambers since 1972 and replace it with the county seal.

The tapestry, which Hokama said was commissioned by the county in 1972, was made by world-renowned weaver and Hawaii native, the late Alice Kagawa Parrott. The tapestry was removed on Aug. 15 “without a clear cause or reason, and without an opportunity for public input,” Hokama said in a news release last week.

“The Maui County Seal tapestry is historically significant to the people of Maui County and the State of Hawaii. Such an historic art piece has tremendous public value and should be treated with the same provisions and standards as works belonging to the Hawaii State Foundation on Culture and the Arts public art collection,” Hokama said in the news release.

But King said Tuesday that there have been concerns over the cleanliness of the tapestry and that during her first term she coughed “a lot” when up at the chairperson’s seat closest to the tapestry in the chamber.

She said that early in the new term, when “I did get support ahead of time to get (to be) chair, we had a meeting of what my leadership would be like,” and some topics included changes in the chambers. 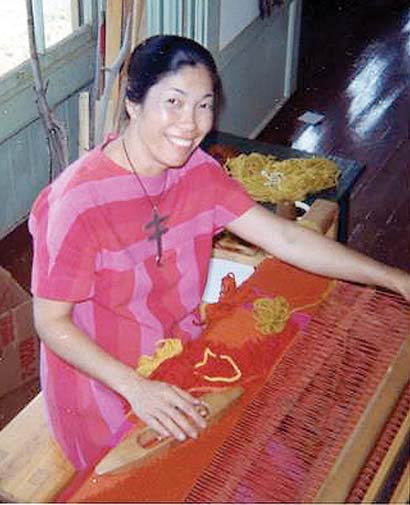 There was support then by new council members to have a county seal replace the tapestry, she said.

King also noted that Council Member Shane Sinenci had some health concerns about the tapestry. Sinenci could not be reached for comment about those health issues.

The council chairwoman said that she is not required to get approval from other council members to remove the tapestry and that she has the power to make those decisions regarding the chamber. She said she consulted with the Office of Council Services and the Office of the County Clerk and did not receive any objections.

King said that money to make the seal and install it came from excess funds from last fiscal year. The total cost was more than $9,000.

Deputy County Clerk Maggie Clark said Tuesday that the cost of the new county seal was $3,309.90 and funding came from fiscal 2019 Office of the County Clerk funds, which would have lapsed June 30. 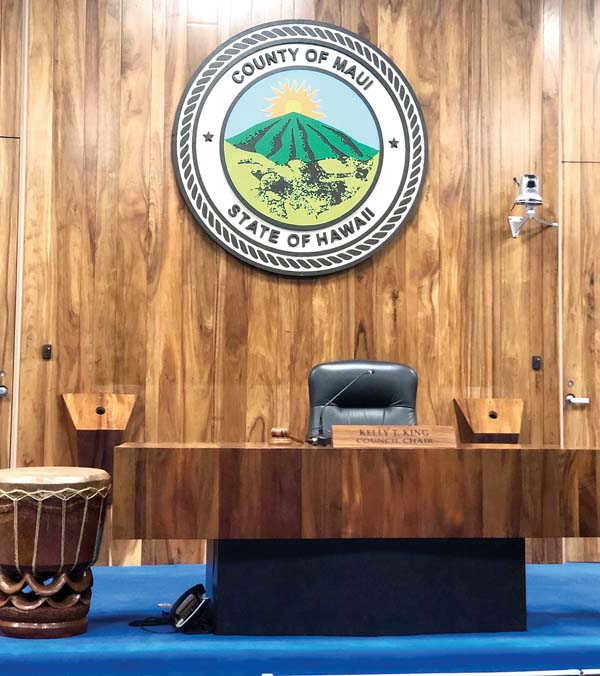 This is the new county seal that took the place of the Maui County seal tapestry that has been hanging in Council Chambers since 1972. The tapestry was taken down on Aug. 15.

There were additional installation costs of $6,081, which included the removal of the tapestry, repair work, refinishing of the koa wood wall behind the chairperson’s desk and the hanging of the new seal, Clark said.

Both Hokama and King say that the chairwoman did alert the council of the removal at a meeting on July 8. Hokama said he “firmly objected” and that no timeline was shared about the removal. King said that after the July 8 meeting no council member approached her with objections.

Then on Aug. 15, all members received an email from King’s office about the removal of the tapestry that day. Hokama said members were not told where the tapestry would go.

Efforts to contact King by Hokama and Council Member Yuki Lei Sugimura were unsuccessful, both members said. King said Sugimura did contact her office on Aug. 15 but the two were never able to meet because of conflicting schedules. Sugimura said Tuesday that she did contact King’s office but that the chairwoman’s office never responded.

As for the tapestry, King said staff is looking into who could clean it and whether it could withstand a cleaning. She said it is her intention to have the tapestry cleaned and hung in the seventh floor committee room, but she is open to finding another location. 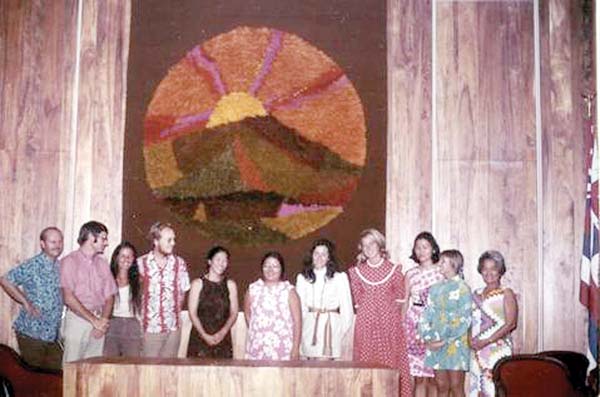 In 1972, world-renowned weaver Alice Kagawa Parrott (in black) had her tapestry hung in the Maui County Council Chambers. The photo came from gravelandgold.com/blogs.

King noted that no one complained when her predecessor, council Chairman Mike White, brought in Hawaiian drums that sit next to the chair’s desk in the chamber. Office of Council Services said Tuesday that the cost of the drums was $3,120.

King said that this is a personal issue between her and a couple of council members who don’t like change. She said that the council shouldn’t spend too much time on these matters but rather focus on “issues of the day,” which include housing, over-tourism, cess-pools and injection wells.

“It was never my intention to anger or hurt them (council members) with this decision, and I still don’t understand their intense opposition, but it saddens me that the media finds the issue so profound,” King said in a written statement to The Maui News on Tuesday.

Hokama said Monday that the seventh floor committee room may not be a good place because the tapestry was made to fit the large walls of the chamber.

The tapestry is “part of the building” and that these types of changes should be brought up for discussion, he said. “The tapestry belongs to the people of Maui.”

He compared the art work to those of other artists who have works in public places, such as the late Tadashi Sato, who designed “Aquarius,” the glass mosaic at the State Capitol on Oahu.

He asked for the same respect for Kagawa Parrott, who was born in Honolulu in 1929 and is a first-generation Japanese-American who studied at the University of Hawaii and the Cranbrook Academy of Art in Michigan. She has permanent collections in London, Norway, New York City, Chicago, Honolulu and Maui. The state owns four of her woven pieces as part of the Hawaii State Foundation on Culture and the Arts permanent collection.

In 1972, Kagawa Parrott spent nine months as an artist-in-residence in Puunene, working and teaching schoolteachers. During this period, she completed several public commissioned projects, including the large tapestry for the University of Hawaii Maui College Library called “The Royal Cape.”

The total cost for the Kagawa Parrott’s tapestry for the council some 40 years ago was $7,500 for construction, design and installation, Hokama said. Today, that would equate to more than $46,000.

In 1972, world-renowned weaver Alice Kagawa Parrott (in black) had her tapestry hung in the Maui County Council Chambers. The photo came from gravelandgold.com/blogs.

A worker takes down the 45-year-old tapestry from the Maui County Council Chambers on Aug. 15. Photo courtesy of Council Member Riki Hokama’s office

An anchor of historic Makawao town and one of the most well-known Italian eateries on Maui, Casanova Italian Restaurant and Deli is in the process of changing hands. Giovanni Steven Cappelli, who helped found the deli 33 years ago, said he is excited about new owners Josh Stone and Erik “Hutch” Hutchinson, who have run Flatbread Co. in Paia. The Maui News / KEHAULANI CERIZO photo

Giovanni Steven Cappelli, owner of Casanova Italian Restaurant and Deli in Makawao, said many love affairs have started at these tables. “The good food and wine helps, too,” he added. The Maui News / KEHAULANI CERIZO photo

This is the new county seal that took the place of the Maui County seal tapestry that has been hanging in Council Chambers since 1972. The tapestry was taken down on Aug. 15.