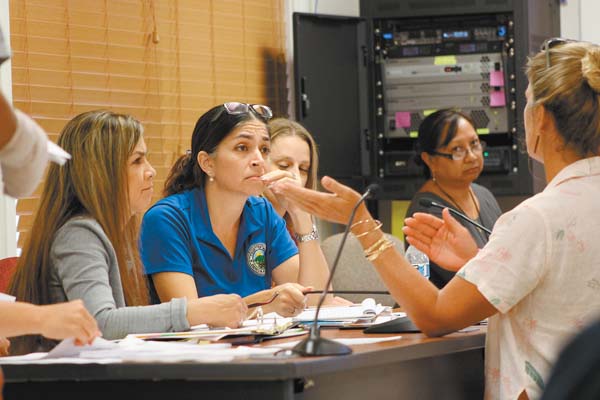 Department of Parks and Recreation Director Karla Peters (from left) and Park Permits Officer Lisa Almeida speak with a surf school owner during a break in the meeting. The department plans to decide on the permits within the next two weeks. The Maui News / COLLEEN UECHI photo

WAILUKU — For years, eight surf schools have held permits to access the beach through Kamehameha Iki Park in Lahaina.

The only problem? Only two operators are allowed.

The county had hoped that eventually businesses would drop off, but now it’s decided it’s time to bring the park into compliance.

“It was brought to our attention that the law was not being adhered to, and the new administration was very supportive of coming into compliance with the historic district law,” said Lisa Almeida, park permits officer with the Department of Parks and Recreation.

On Monday, the eight businesses came before the Cultural Resources Commission to plead their cases. The commission’s job was not to approve or deny permits, but to decide whether or not the businesses could operate commercially at the park, which is located in a historic district.

Kamehameha Iki Park is located in an area that was once King Kamehameha III’s royal residential complex during the time that Lahaina was the capital of the Hawaiian Kingdom. The park is just down the road from Lahaina Harbor and is within the vicinity of popular surf spots like Shark Pit and Breakwall.

Businesses who use a county park to access state waters need two permits — a commercial ocean recreation activity, or CORA, permit from the county and a commercial use permit, or CUP, from the state Department of Land and Natural Resources.

Permits for Kamehameha Iki Park limit hours of operations to 7 a.m. to 3:30 p.m. Monday through Friday, and 7 a.m. to noon Saturday. Sundays are prohibited.

The permits also limit businesses to one instructor for up to six surfing students, with no more than two instructors and 12 students out at one time per permit.

Almeida explained Monday that the county Department of Finance used to handle the permits, which they issued without limitations. Then the process was transferred to the parks department, which conducted a study in 2005 to determine the number of CORA permits appropriate for each beach park. That study set a limit of two permits for Kamehameha Iki Park, and the CORA administrative rules were based on the study.

Most of the beach parks were over capacity in terms of permits, and the parks department had hoped that businesses would eventually drop off. But few have done so at Kamehameha Iki Park, which had 11 permitted businesses at the time of the 2005 study and now has eight.

Business owners said Monday that they were supposed to get their permits renewed at the beginning of July but were told that the parks department was putting renewals on hold. They said they haven’t been accessing the park since mid-July, and that since then, the park has started to see increased homelessness, rubbish and drug paraphernalia.

“As leaders that’s in the park we try to teach them (kids) the responsibility of how to take care of the park, how to clean the park, how to take care of each other, fix the boards,” said Kelson Kihe, an instructor with Maui Beach Boys. “We’re always down there trying to malama the place as much as we can. Ever since the homeless got kicked out of the Banyan Tree (Park), they’re all moving down there.”

Commissioners heard the permits on a case-by-case basis. Ian Bassford called it “the toughest meeting I’ve ever been to.” As an archaeologist, he understood the significance of the site, but as a classmate of some of the surf school employees, he knew that reducing the number of permits was “going to cut people off at the knees.”

“I do not want to be responsible for impacting someone’s livelihood,” Bassford said.

Commissioner Louella Albino said that “my na’au tells me don’t, to deny this.”

“And I don’t want to offend anyone because it’s not based on any one group or person, but because of all of the damage that has been done culturally, generationally,” Albino said. “We’re never going to get it back.”

Vice Chairman Ivan Lay said that he thought having certain areas designated for tourism or surf schools “is a good thing, because you’re keeping them in one area.”

It denied Reef Encounter, Third Reef (doing business as Maui Waveriders) and Maui Beach Boys, all of whom operate in other beach parks, as well as Goofy Foot Surf School, which commissioners felt did not need a permit because it has private access through the shopping center at 505 Front Street. After deadlocking 3-3 over Royal Hawaiian Surf Academy, which also has private access, the commission decided to send the permit over to the parks department to decide.

It’s now up to the parks department to select the two businesses that will operate at the park. Almeida and Parks Director Karla Peters said the department aims to make a decision within the next two weeks. They said that all other CORA permits for the county have been processed, and that Kamehameha Iki is the last one.