Findings highlighted ahead of ‘risky’ try to move kiwikiu 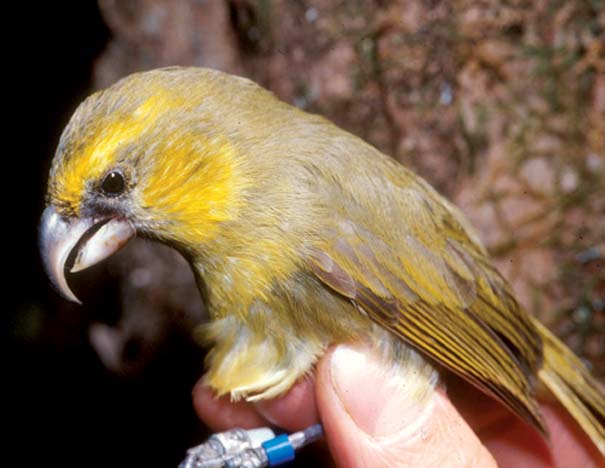 The kiwikiu, or Maui parrotbill, is only found on Maui. A study showed only about 300 kiwikiu remaining in the wild. -- National Park Service photo

Only about half the number of rare, beloved Maui songbirds exist in the wild than previously estimated, according to the first large-scale study of its kind in nearly four decades.

While the numbers are sparking renewed worry over possible extinction, they match estimates held for some time by local scientists who are working on a “risky” project to translocate birds this fall.

“We have been saying these birds have been declining for years,” biologist Hanna Mounce of the Maui Forest Bird Recovery Project said Friday. “And now that we have this more robust survey, and it does match that. We were hoping we weren’t right, but we were.”

Fewer than 312 kiwikiu (Maui parrotbill) and 2,411 akohekohe (crested honeycreeper) remain in the wild — about 50 percent fewer than 2012-13 estimates for the endangered species.

The 2017 survey, conducted by federal, state and local agencies, was the largest and most comprehensive effort to research the birds since 1980, scientists said. Findings were highlighted Friday. 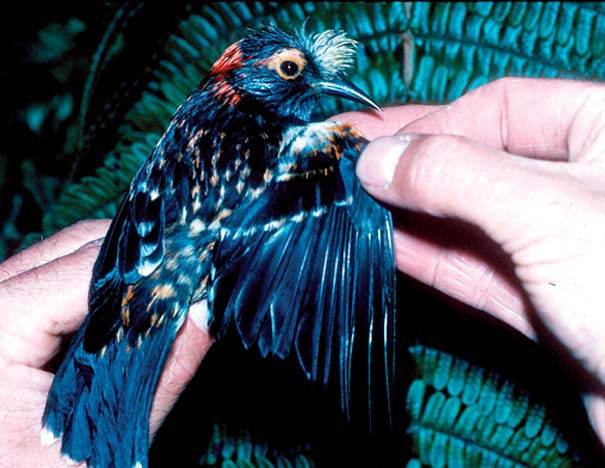 The akohekohe, or crested honeycreeper, which is endemic to Maui, has only 2,411 individuals remaining in the wild, according to the largest bird study of its kind in about four decades. -- National Park Service photo

“The most recent Maui endemic forest bird to go extinct was the po’ouli (black-faced honeycreeper) in 2004, and based on the findings from this survey, we are worried the kiwikiu is next,” he said in a news release.

Kiwikiu and akohekohe, endemic to the Valley Isle and only found within the surveyed major declines over recent decades due to disease, depredation and habitat degradation.

Avian malaria is the most significant long-term threat, scientists said. Spurred by climate change, mosquitoes that carry malaria are spreading to higher elevations and may lead to even greater impact on “most native Hawaiian songbird species.”

Considered the most threatened among Maui’s honeycreeper family, kiwikiu were estimated to number 200 to 300, Mounce told The Maui News earlier this year. However, the recent data represent a more thorough survey than previous ones.

“We analyzed data as one set,” Mounce said. “When you are trying to analyze rare, cryptic species, it gives you more power to see trends and determine population estimates.”

The numbers underscore a multiagency project in the works for years that will take about 20 kiwikiu — some from East Maui and others raised in captivity — and relocate them this fall high atop leeward Haleakala in a place called the Nakula Natural Area Reserve.

“Leaving them alone is not an option,” said Mounce, who calls the plan “risky and challenging.”

“We have to take drastic efforts and do something different than what we’ve done in the past,” she said.

Since 2012 and 2013, state Department of Land and Natural Resources Division of Forestry and Wildlife and Plant Extinction Prevention Program, along with Maui Forest Bird Recovery Project, have planted more than 200,000 native plants in the Nakula Forest Reserve and Kahikinui Forest Reserve to bolster habitat in preparation for the translocation.

Despite the disheartening population numbers, Mounce, who’s worked with kiwikiu for 15 years, said the data is an urgent reminder of what can be done with greater community and governmental involvement.

“We don’t want people to lose any hope,” she said. “Community members who can advocate for conservation efforts, control of invasive species, upping biosecurity . . . volunteer and work on forest restoration are needed. We need larger state and federal changes to give protection to these species and prevent future threats from coming in.”

“This interagency team is actively pursuing and researching the actions needed to save these species,” said Haleakala National Park Superintendent Natalie Gates. “Looking toward the future, the county, state and groups involved will need the feedback and participation from the community to keep the conversation going on what plans need to take place to save the Hawaiian forest birds.”