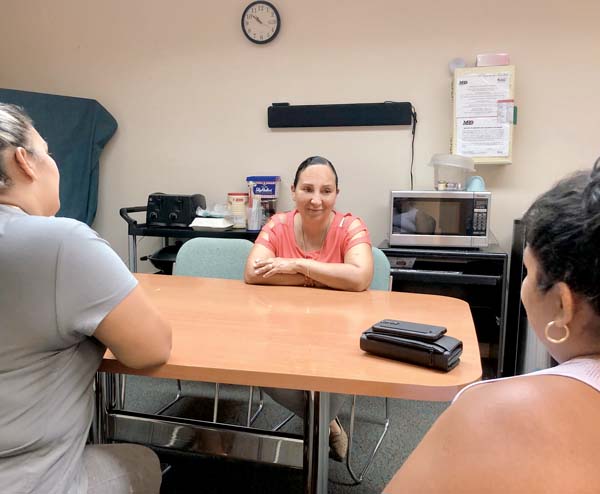 Maria Lores-Browne (center), Maui Economic Opportunity Elance program specialist, talks with her clients, legal immigrants from Guatemala who reside Upcountry, about the nonprofit’s worries over a rule that would deny green card applications from immigrants who have received or are planning to get help from federal, state and local programs. This photo was taken Friday at the Wailuku office of MEO. -- The Maui News / KEHAULANI CERIZO photo

WAILUKU — Maui Economic Opportunity program specialist Maria Lores-Browne tears up when talking about a new national policy that would hurt many of Hawaii’s legal immigrants, along with nearly 85 percent of clients in an MEO program.

Dubbed the “public charge” rule, the U.S. Citizenship and Immigration Services policy would prevent legal immigrants from obtaining green cards or permanent residency if they use or plan to use federal, state and even local public benefit programs, such as food stamps, Medicaid or housing subsidies. The rule was approved this month and would start Oct. 15.

The rule’s effects would be far-reaching, especially in the melting pot of Hawaii, where nearly 1 in 5 Hawaii residents is an immigrant and more than 1 in 7 is a native-born U.S. citizen with at least one immigrant parent, according to the American Immigration Council.

Meanwhile, the office of U.S. Sen. Mazie Hirono, D-Hawaii, told The Maui News on Friday that the senator plans to introduce legislation next month to block implementation of the rule.

“Organizations like Maui Economic Opportunity are doing great work to help new Americans transition and adapt to life in Hawaii,” she said via email. “Donald Trump’s so-called ‘public charge’ rule will directly hurt hardworking families — including MEO clients — by punishing them for using critical services or discouraging them from accessing these services out of fear. It’s why I will introduce legislation to block implementation of this rule as soon as Congress returns to Washington in September and continue to fight to protect immigrant families from the intentional cruelty of Donald Trump and his administration.”

The more than 200-page amendment to U.S. Department of Homeland Security regulations details how the department will determine whether someone applying for admission or adjustment of status will be ineligible because he or she is likely to become a “public charge.”

Three of Lores-Browne’s clients, each from different families in Guatemala, spoke Friday about their desire to leave their country years ago due to violence and lack of job opportunities and to find a better life through working hard on Maui. Fear about the new “public charge” rule is palpable, especially in a time when immigration issues are reaching a boiling point nationwide.

“This not only impacts me but for a lot of people who get medical or any kind of help,” said the 62-year-old Kahului resident, who said he gets medical assistance due to polio.

“I’m working. I pay my own taxes. It’s not like I take freebies,” said a 35-year-old Makawao resident, who works as a housekeeper and is worried about what the changes will mean for her three children.

“My biggest worry when it comes to deportation is what will happen to my kids,” said a 36-year-old Kula resident, who also works at times as a house cleaner.

The American Immigration Council said the top countries of origin for Hawaii’s immigrants are the Philippines (46.1 percent), China (8.5 percent), Korea (7.9 percent), Japan (7.7 percent) and Vietnam (3.8 percent). However, the MEO populations most impacted will be Filipino, Hispanic and Latino communities, said CEO Debbie Cabebe.

MEO program data showed that nearly 85 percent, or 84 of 99 clients served in the last quarter, will be impacted by the rule. Lores-Browne anticipates the impact will be much higher, as she works with nearly 2,000 people in Maui County, many of whom use MEO’s immigration services. State officials in media reports said the chill effect will be far-reaching, especially in Hawaii.

“We’re very concerned,” Cabebe said. “The assumption is because they’re getting public assistance that they’re not contributing members of the community. . . . It seems unjustified consequences to impose on people who are not necessarily trying to take advantage of our system but who are using it to get to a better place.”

She added that many Maui County clients transition from public assistance to self-sufficiency, “but it doesn’t happen overnight.”

One in five Hawaii workers is an immigrant, making up a critical share of the state’s labor force across industries, according to the council, and immigrants in Hawaii contribute more than $1 billion in taxes annually.

Cabebe and Lores-Browne, along with MEO staff, said they can’t “sit here and do nothing.” They are pleading for help in Washington, D.C.

“It was not built by just a rich man. He didn’t put his back on it. It was all these people, like these three people you see here. That’s how America was made.”