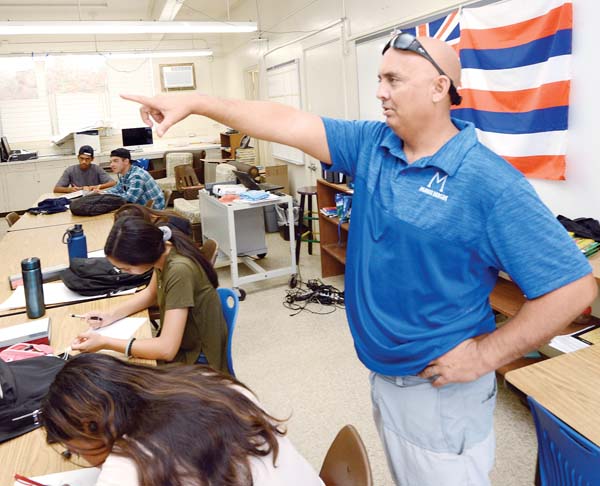 Maui High School teacher Jeff Balinbin works in a newly air-conditioned room while teaching a College Prep Study Skills class Thursday morning. He said the air conditioner in the background was installed Wednesday. “It was so hot before,” he said. The Department of Education’s new air conditioning policy allows for the installation of window AC units. -- The Maui News / MATTHEW THAYER photo

The program was developed in the wake of the completion of Gov. David Ige’s $1 million, 1,000-classroom air-conditioning initiative and limited funds available for future air-conditioning projects, the Education Department said in a news release last week. Of the roughly 11,000 classrooms in the state, 6,200 have air conditioning.

Through the new program, schools and communities can take the lead to cool classrooms in buildings that can accommodate the increased energy use. Schools have had the ability to purchase or accept donated AC units and install them using licensed contractors. However, the department imposed technical requirements aimed at ensuring safety and compliance with regulations that some schools found burdensome, the news release said.

Under the new program, the department will work with schools to cover the cost of electrical assessments and will advise which buildings have the electrical capacity to support energy-efficient window units, said department spokeswoman Nanea Kalani earlier this week.

Schools can then make arrangements to procure units using school funds or by partnering with community groups to fundraise or by engaging their area lawmakers. 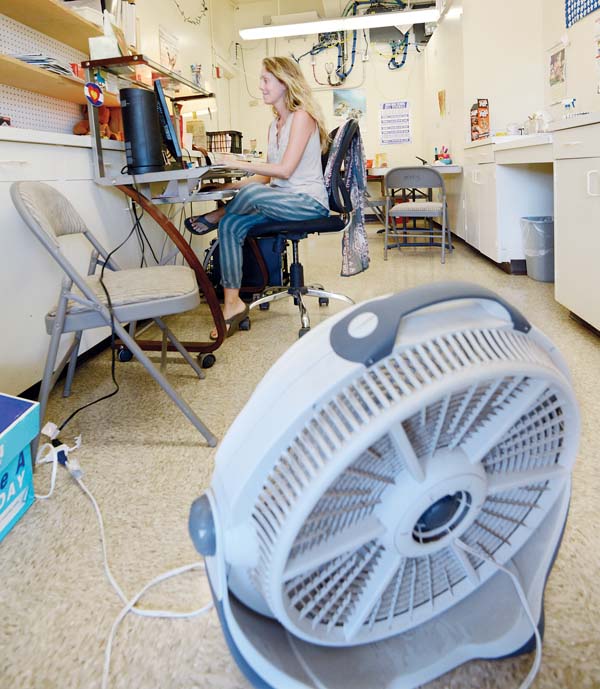 Maui High School counselor Jessica Oshier is cooled by a fan Thursday. “It’s been really hot,” she said. “I have to have a fan. When the kids come I either move the fan or go outside.” -- The Maui News / MATTHEW THAYER photo

“Under Schools Directed AC, we’re able to tell schools which buildings they can install in and how many units they can put in,” said department Public Works Administrator John Chung.

In addition to the two installations on Maui through the program, two more Maui schools are in the process of installing air conditioning units and nine schools have requested electrical studies or have had them completed, Kalani said.

Ige’s 2016 initiative approved by the state Legislature fitted 1,300 classrooms with air conditioning. However, they were complex systems with photovoltaic panels, battery systems, controllers, enclosures and inverters, Chung said Wednesday in an email. A handful of these systems, including some on Maui, have had problems.

In response to questions about broken systems and delays in repairs at Maui schools, Chung said that the island systems were designed to be independent of the Maui Electric grid and to rely on batteries for power.

“Our team believes these systems can be connected to the grid to charge overnight and are developing those solutions at the moment,” he said. 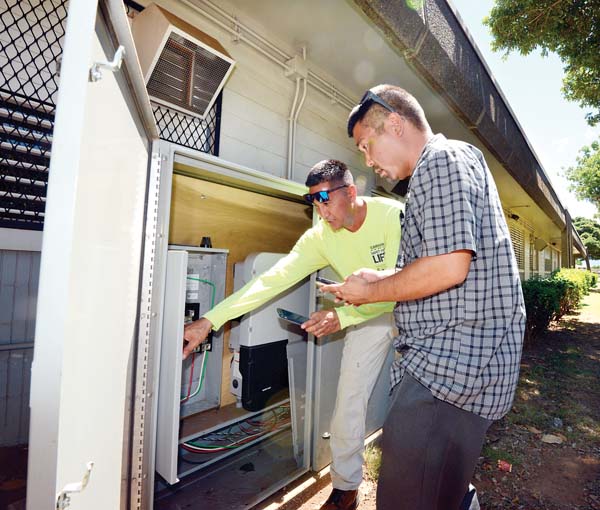 Repair and maintenance of existing PV-powered AC systems is ongoing, he said, adding that these systems were designed for heat abatement “to create comfortable learning environments during the warmest time of the day.” They were not “designed to run constantly at the coldest setting.”

“We have deployed a team of designers and contractors to assess the nonworking systems and identify solutions to restore functionality,” Chung said. “We are in the process of contracting for repair services.”

PV AC systems may be energy neutral but allowing energy-efficient window AC units is more economical and less cumbersome to install and maintain.

“These are less complex units from installation to maintenance, where we’re not having to tear down walls or install solar panels or battery systems. It will be easier for our schools to maintain these units rather than having to contract out for maintenance service,” said Christine Shaw, assistant superintendent for the office of facilities and operations.

The Maui schools that have installed energy-efficient units under the new program are Lahaina and Iao intermediate, and Maui High and Paia Elementary have installations in progress, Kalani said.

The department recommends 2-ton (24,000 BTU/h) units for a typical 900-square-foot classroom that is a dual inverter or commercial grade system. It also must be Energy Star certified.

“Our keiki and our teachers deserve a better learning environment. For years, the HSTA has advocated for the public school system to air-condition our classrooms,” he said. “I’m glad the DOE is taking these steps to make it easier and much cheaper to install AC.

“Our educators can now advocate and tap into community supporters to speed up the process. I hope that in a few years all of our hot classrooms in Hawaii will finally be cooled.”

In an interview with The Maui News, Rosenlee said the new program will cut costs of installations from hundreds of thousands of dollars to hundreds or thousand of dollars.

The broken or unreliable PV AC systems need to be fixed because conditions in those classrooms could be worse with insulation instead of windows, he said.

“We have to fix that problem,” Rosenlee said, adding that there are “lots that don’t have AC at all.”