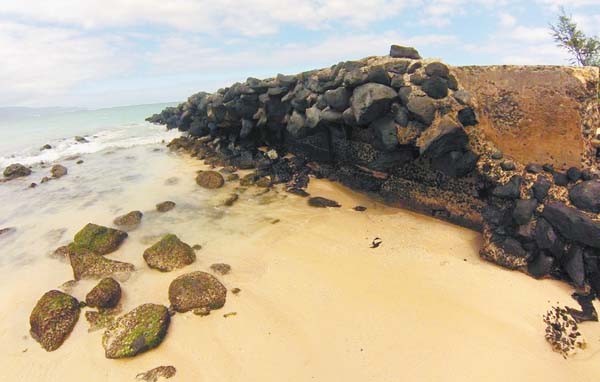 Groin 3 at Spreckelsville Beach is severely destabilized, having lost a lower foundation support stone. Other damages include other missing stones and significant vertical cracks. It’s one of seven groins that are slated for repair or replacement. Construction is expected to begin this fall, according to a final environmental assessment for the project that was released Friday. Sea Engineering Inc. photos

Efforts to repair several rock groins that have kept sand loss in check at Spreckelsville Beach are estimated to start this fall, according to a final environmental assessment for the project that was released Friday.

Proposed by a group of Spreckelsville Beach neighbors, the project centers on seven rock groins on the west end of the beach that are believed to have been built before 1944 and are now deteriorating. For years the rock groins had played a crucial role in helping to stabilize the beach, which saw a shoreline recession of typically less than 1 foot per year, according to the assessment.

But in recent years, sand loss and shoreline recession have dramatically increased due to the deteriorating groins, which have suffered damage from the 2011 Japanese tsunami and sustained large winter surf. According to the assessment, “their condition is such that their effectiveness in stabilizing the shoreline is poor to marginal.”

Six of the seven groins are constructed out of rock, while the other, Groin 3, is a rock mound with a concrete core. Plans call for repairing Groins 1-2 and 4-7 to their original design, using the existing stones and additional ones as needed. Groin 3, meanwhile, is “severely destabilized” and “a safety hazard to beach users” after losing its lower foundation support stones on the west side. It would be replaced with a new engineered groin.

The length of each groin would be based on the location of existing rock at each groin, “which is believed to be consistent with the original design,” according to the assessment. The rock groins are believed to have been built in the early to mid-1900s, “certainly pre-1944.” 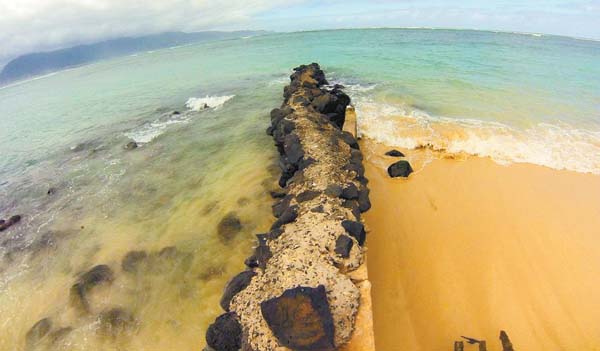 Six of the seven groins are made of rock and one groin — Groin 3 — is a combination of rock with a concrete core. Groin 3 would be replaced by an engineered groin design based on current wave conditions and up-to-date sea level rise projections.

Also known as Stable Beach, the project area is located just past Kanaha Beach Park and makai of the Kahului Airport. It was part of the former Spreckelsville Plantation sugar cane operation that was founded by Claus Spreckels in 1878 and later became Hawaiian Commercial & Sugar Co. Stable Beach was named for the HC&S stable located at the intersection of Hana Highway and Spreckelsville Beach Road, also known as Stable Road.

Plans to replace the groins are being coordinated by the Community Beach Restoration Foundation, made up of five contiguous beachfront neighbors who created the nonprofit as a way to more formally pursue beach conservation and restoration. The foundation “is partnering with qualified professionals” to carry out a beach management plan for the area.

Neighbors hope that repairing the rock groins will not only keep the beach in place and restore stability, but also create a “first line of defense” in the event of natural coastal hazards, such as storms, high surf or tsunamis.

The project is estimated to cost $1.5 million to $2 million, and the foundation has said that the money would come privately from area property owners, with no funding from the government. Construction would start once the necessary permits and approvals have been obtained and a construction contract is awarded, which is estimated for this fall. Construction would take about 43 to 111 days, according to the assessment.

The final environmental assessment will be reviewed by the Army Corps of Engineers, Honolulu District; the state Department of Land and Natural Resources; the county Planning Department; the Hawaii Coastal Zone Management Program; and the state Department of Health. The agencies will then decide whether to issue the necessary permits and approvals.

Once construction of the project begins, swimmers and other beachgoers would be redirected around this section of shoreline.

The full assessment is available in the latest edition of the Office of Environmental Quality Control’s “The Environmental Notice.” To view the assessment, visit oeqc2.doh.hawaii.gov/EA_EIS_Library/2019-08-23-MA-FEA-Stable-Road-West-Groin-Rehabilitation.pdf.