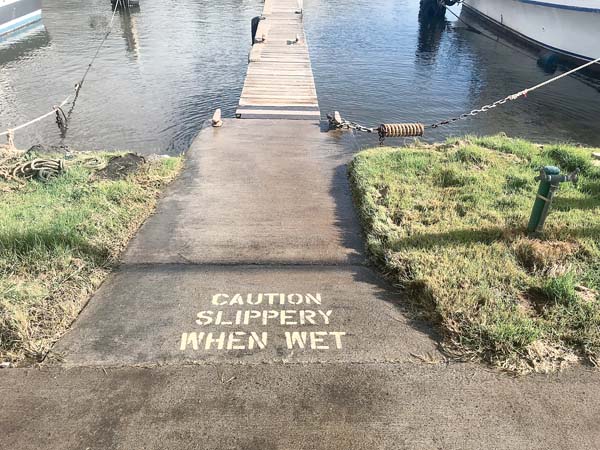 Water from a leak at Maalaea Small Boat Harbor has been flowing onto walkways and into the parking lot and the harbor. The state says it is working on repairing the problem but is having difficulty securing a contractor. The Maui News / MELISSA TANJI photo

MAALAEA — The state is working on repairing a water leak at Maalaea Small Boat Harbor that harbor users say has been causing water to flow into the parking lot and into the harbor itself for months.

“On some days, it looks like a little spring. It’s a constant flow,” said one harbor worker, who declined to give his name for fear of retaliation. “It’s coming through the middle of the parking lot, flowing into the harbor.

“It’s been (going on) so long, it’s like a normal thing already. Everyone knows about it.”

The leak emerges near Slip 28 and 30 with water flowing through the middle of the parking lot (between the breakwall and the slips). The water continues toward several slips, including over a wooden deck and into the harbor.

Harbor users said Tuesday the leak has caused a “slip and fall hazard.” The words “Caution Slippery When Wet” have been painted in yellow on the concrete. The constant flow of water has fostered algae growth, said one harbor user, who requested anonymity. The state has been seen power washing the area as recently as last week, the harbor worker added. 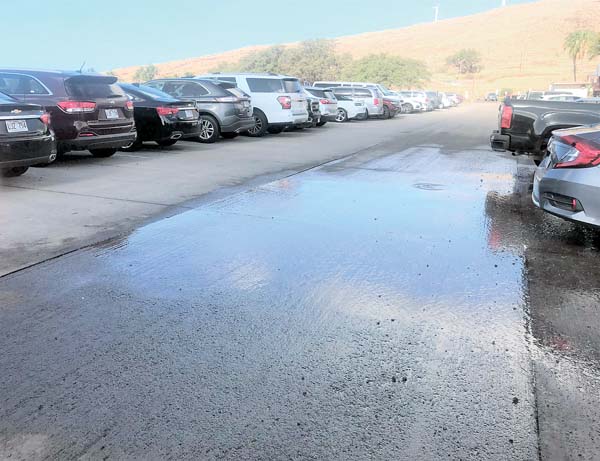 Water leaks from a spot in the parking lot at Maalaea Small Board Harbor. Harbor users say the leak has been going on for months.

He said water pressure at the slips doesn’t seem to be affected by the leak.

Paul Sensano, Maui branch manager of the state Department of Land and Natural Resources Division of Boating and Ocean Recreation, said Tuesday that a solicitation for bids went out for repairs but that there were no takers.

Four companies have been contacted by email by the division about the repairs. One contractor said it cannot submit a bid at this time; the second contractor is working on the proposal; a third contractor has submitted a bid; and the state has not heard back from the fourth contractor, he said.

Sensano said the state had a deadline of Tuesday for the submittal of bids and will be moving forward after verification of bidding compliance.

He said this break is the second one at the harbor. Dan Dennison, the senior communications manager for the DLNR, said Tuesday the first break was in April 2018. 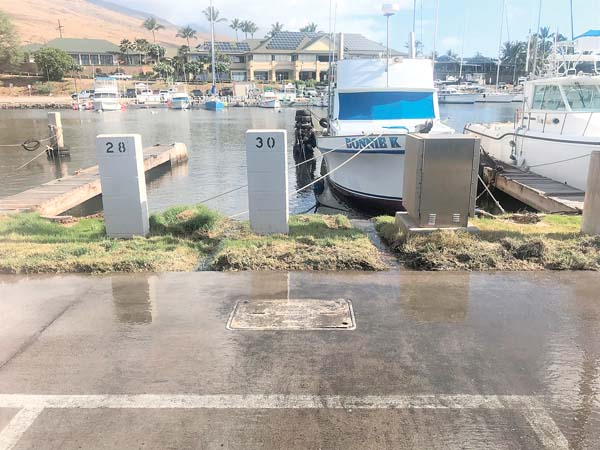 Water from a nearby leak flows onto a portion of a walkway at Maalaea Small Boat Harbor near Slips 28 and 30 on Wednesday.

State officials did not provide information about the cause of leak, whether the water is potable, how much water is being lost or when the second break began.

Maui County Water Supply Director Jeff Pearson said in an email Tuesday that the county is aware of the leak and has been in contact with state harbors but that the repairs are the state’s responsibility.

He added that a leak in Maalaea would not impact water supply in Waikapu, Wailuku Heights and Kehalani Mauka, which are currently under a voluntary water conservation notice.

On June 21, the department began calling for customers in Waikapu, Kehalani Mauka and Wailuku Heights to conserve water and to avoid unnecessary water use until further notice. The department said tank levels were low due to an unidentified increase in consumption and damage to a pump at Waikapu well. The department continues to investigate increased consumption.