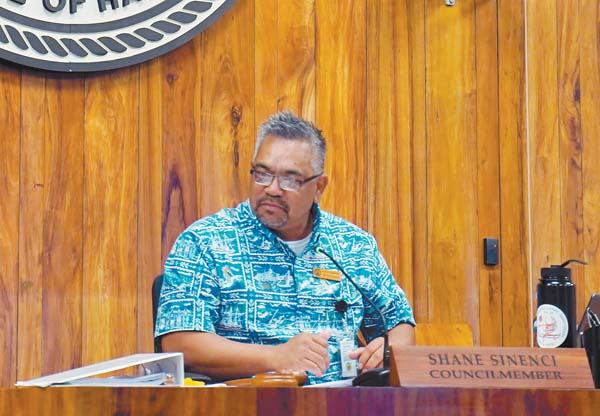 WAILUKU — Testifiers at a Maui County Council committee meeting Tuesday echoed the need for less studies and more action when it comes to the impacts of tourism in Maui County.

After hours of discussion, Chairman Shane Sinenci deferred the proposed resolution “urging the administration to conduct a sustainable tourism assessment” so his Environmental, Agricultural and Cultural Preservation Committee could consider amendments, such as action items.

“We are looking for concrete solutions and lines — hard lines, drawn now — no more studies, no more recommendations,” said testifier Autumn Ness. “Lines that actually affect the numbers of people who come here, the carrying capacity. That’s literally the only thing that works.”

Committee member and council Chairwoman Kelly King affirmed Ness and said more studies can be a way of delaying action.

“I think you’re right. I think a lot of what happens is it’s easy to keep pushing things off and say we will do another study and ask for a plan and it comes out to be more of a report than a plan,” King said. “I think this council is ready to take a hard look at what actions can be taken.” 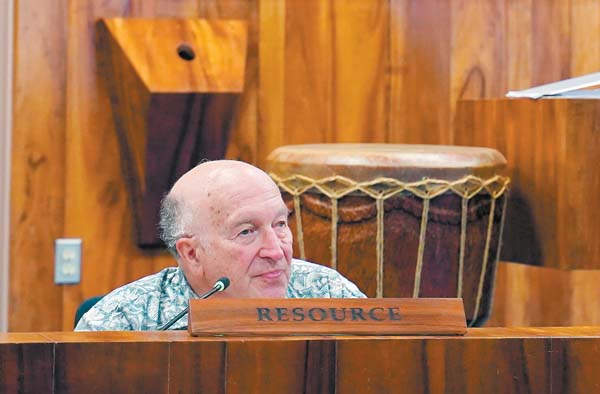 Kula resident Dick Mayer, a longtime Maui college professor, serves as a council committee resource during a discussion on the impacts of tourism on Maui County on Tuesday.

Hawaii Tourism Authority data show that arrivals are up and spending is down statewide, especially within Maui County. Maui island visitor arrivals last year increased by 6.2 percent to 2,914,144, making it the fourth consecutive record-breaking year.

Also, Maui County was the only county to see visitors go up as its spending went down during the first half of this year. Among the four larger islands, Maui’s visitor spending decreased 1.8 percent to $2.61 billion and visitor arrivals grew 4 percent to 1,522,043 compared to January through June 2018.

Serving as a resource for the committee, Dick Mayer, retired Maui college economics and geography professor for 34 years, pointed to implementing policies within the Maui Island Plan, adopted by the council in 2012 and 2014, as a way to protect the county’s environmental and infrastructural resources.

The plan’s policy 4.2.3a discusses promoting “a desirable island population by striving not to exceed an islandwide visitor population of roughly 33 percent of the resident population.” Based on HTA data, Maui island had a visitor-to-resident percentage of 41.3 percent last year, Mayer said, which equals about 2.42 residents for each tourist on the island on average.

Peak visitor months are July through August and January through February.

“Please pass a stronger resolution than the one before you today,” he said. “It only demands an ‘assessment’ that delays action.”

“My recommendation is that this council use the power that it has to do something similar to what the council did roughly around 1990 — they had a moratorium on hotels,” Perez said.

“I’ve been talking about this problem for probably about 30 years,” he added. “With all due respect, I think we need to change the world on top of this thing from resolution to ordinance. I think we need to take action instead of have another study.”

Ness, who said she worked on tourism impacts with former Council Member Elle Cochran, suggested the council limit the number of rental cars that can be on Maui County roads on any given day and cap tourism accommodation units. She also pointed to the Maui Island Plan as a resource.

Ray Hutaff, Valley Isle Excursions CEO, testified about the importance of educating visitors and managing tourism from a cultural standpoint.

“Some people call visitors stupid,” he said. “Sorry, they’re not stupid — we are. We are not educating them like we should be. . . . If a child grabs something, does something wrong, we correct them.”

He added that tourists are “nice people” and if they are educated correctly, “then we all win.”

“I believe the tourism industry . . . that I run, the way we run it, the way we support HTA, those things can make tourism viable and proper,” he said. “So no, I’m not worried. I’m hopeful that we can all have a chance to sit down and talk and make things work well.”

“I think we need to do some things as soon as we can,” he said. “What if we asked our community members to offer five positive solutions to enhance what we call tourism today? Some of them we can do immediately.”

Tuesday’s agenda item follows a June meeting when the panel acknowledged the “fact that Maui is at a tipping point in terms of visitors,” said Sinenci. During a meeting July 2, the panel followed up with a resolution from the previous council that encourages action on the problem.

Committee members, along with Office of the Mayor’s tourism liaison Terryl Vencl and Office of Economic Development Director Kay Fukumoto, discussed the complexity of tourism in Maui County, as the industry is a vital part of Maui’s economy.

In April, the Maui Hotel & Lodging Association said its members are the largest employer of residents in Maui County, directly employing approximately 40 percent of residents and indirectly employing 75 percent. However, Florida State University recently released a study that places tourism, Hawaii’s largest industry, as the lowest paid in the country.